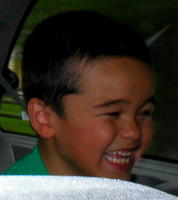 Here's Charlie telling me one of his favorite stories, and drawing quite unknowingly on the oral composition technique of no less a poet than the ancient Homer:

Won day, John got hungry so he went to a bakershop. A pay-per bagg, a pay-per bagg, no-one puts me in a pay-per bagg. I can jump out-dee-door, i can wun. Slow coach wady, slow coach, John, 'f you try to cartsch me I'll be gone!

(Big mischievous grin; the photo is from last year, but the grin is the same.) The ancient Greek word muthos means "a traditional story," especially one passed down orally; it is the origin of our word "myth." Charlie learned the Gingerbread Boy's story from one too many viewings of Teletubbies Nursery Rhymes and, after the video went into the Video Witness Protection Program, from a CD.

(What kind of parents are these, you perhaps are saying to yourself. They let him watch Teletubbies? She already told us that their idea of fun is to take the poor little guy on a boat in a swamp in the industrial wastelands--excuse me, the "Meadowlands," the New Jersey equivalent of flora and fauna. Whatever happened to Disneyworld? Yosemite? A little "it's a small world" and up and down on that Dumbo ride? I can only respond: You gotta hear my husband's riff on the Teletubbies as Beatles babies (and the Wiggles-Monkees connection); Charlie gets fed cauliflower and he likes it.)

From what I've reproduced here of Charlie's speech, you may note how the words he produces on his own (without us prompting "say X or Z") is noun-heavy, with a few adjectives and some verbs, most beginning with "I" as in "I want." Moreover, Charlie throws around certain phrases--"great job" "baby" "[color of] car"; "great job Charlie, great job Howie, great job PoPo"; "Stella baby, Grandma baby, Gong Gong baby, Miss Greene baby, Daddy baby, Alphabert baby"--as Homer uses epithets. A poet in Homer's time (the eighth century BC) recited his poems from memory, drawing on a store of stories and of particular phrasings to describe a god or hero: Aphrodites, goddess of love, is "laughter-loving" and "foam-born"; Hera, queen of the gods, "ox-eyed"; Dawn "rosy-fingered"; the wily Odysseus "of many turnings"; the sea "wine dark." These tag lines are epithets; a poet like Homer would have a vast store of these in his memory to "plug in" to his dactylic hexameter at the appropriate moment.

Now, I think Homer's epithets make sense; it is true that, in my day ("non-Charlie") job, I stand in front of college students and joyfully profess how this is amazing stuff and don't even think of Brad Pitt as Achilles, he's from Kickapoo, Mizzou. Charlie's "epithets" make as much sense as Homer's. It's super-exciting that Stella has a baby--a baby must be a good thing--so why shouldn't his other favorite people have one too? (Charlie's understanding of man and woman, male and female, is recently emerging, and definitely deserving of its own post. Stay tuned.) Epithetic qualities to be ascribed to people are car colors, dog names, and places of residence (these tend to get jumbled and everyone ends up living in Jersey, Calee-fornya, or Minnesoda.) Homer's epithets gave his pre-literate audience a snapshot of the personnage entering the action and Charlie's leitmotif-like "red car" "black car" "white car" play a similar role in his explanations of the world.

The Gingerbread Man has quite an adventure, according to Charlie:

At the last words, fiction becomes reality and Charlie (who get nut-brown tan in the summer) climbs up high and looks over the broad expanse of our living room and