Home Archives Profile Subscribe
A day in the life, and a bunch of words that start with t (#18)
A little bit of Hollywood (#20)

At the end of our Riverkeepers tour of the Meadowlands last Saturday ("The Riverkeeper," post #13), a passenger asked Jim if we thought it was important to take "kids like Charlie" on such an educational tour of the New Jersey environment. "Absolutely," said Jim. 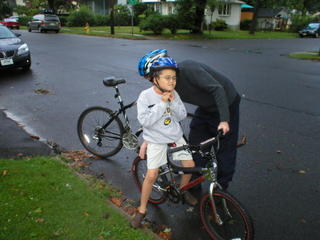 In my posts so far I've tried to record Charlie's language which is certainly limited and ever-developing, from the time when he could only say "dah" and to the lovely 2, 3, 4 and sometimes 5-word sentences of today: "Time takea bath! I want Daddy bike ride helmet on." These are sentences that Charlie has said without us teaching him to put those words together, and without us first modeling a sentence ("Say 'I want to eat the red apple.' Say 'I like to hear Wiggles.'").

The ability to imitate comes naturally to humans, says Aristotle in his Poetics. Humans learn their first lessons--to say "Mama"; to roll a ball back and forth; to dress a teddy bear--by imitating. Humans are the "most imitating" (that's a direct translation of a Greek adjective, "mimetikotaton") of animals and they indeed "rejoice" (the Greek is "chairein") in imitating. Aristotle is attempting to explain why we humans compose poetry, and why we delight in imitations of real life: Why does a child so desire to draw her house, her mom and dad and sister and the dog? To dress like Cristina Aguilera or the equivalent? Why do we love movies?

I first connected Aristotle to autism one September Saturday, just under six years ago. We had read and researched and talked and thought and decided that Charlie--this being his red dab of paint fixation period (see post #5, "The stone wall, the spot of red paint, and a lot of bugs: From one hot season in Minnesota to the start of a New Jersey summer")--needed to be in a forty-hour a week intensive, highly-structured home teaching program based on the principles of applied behavior analysis--ABA. We hired a consultant and a lead therapist and recruited some college students and one graduate student in speech pathology, and we all gathered in our living room on the second floor of a duplex in St. Paul around a blue plastic table and two purple chairs.

It was the first day of Charlie's education. Since Charlie could, for all intents and purposes, do and say nothing, the first tasks were more than elementary: Sitting in one of the purple chairs without protest (crying, screaming, kicking, thrashing, etc.). Coming to the table. Leaving the table. Coming back. Sitting quietly. Paying attention to some simple phrases.

One of those phrases was "do this." Our lead therapist Kristy's voice was high and flutey; she kept her hand with a block poised above a little red bucket and let the block go. Then, very lightly, she guided Charlie's hand to pick up another block placed parallel to the red one and to drop it in. "Great job!" All the girls, the consultant, the lead, Jim and I cheered. Not that Saturday, but some days later, Charlie was coming to the table of his own accord, sitting with a smile in the chair, and--to the command of "do this"--picking up the block and dropping it in the bucket.

"Do this" was the SD ("discriminative stimulus"; the instruction) Charlie was learning as part of a program called Non-Verbal Imitation With Objects. He imitated the therapists putting blocks in buckets, tapping the table, turning around, waving, clapping, pointing, coloring pictures, building lego structures. The therapists were taught to physically prompt him only in the beginning and as little as possible, and to fade the prompts as quickly as possible. This was a team effort that was discussed extensively in weekly meetings; one therapist drew diagrams of where she put flashcards or blocks or other items on the table so her prompting procedure was crystal clear.

And so Charlie learned to learn. He learned numbers and play skills and how to talk (a tale worth at least a few blog entries in itself--watch for these) and more. But what that "do this" program taught him was a skill, an ability, that he did not have--because of the way his brain is wired. Recent research on the brains of autistic persons suggests that the part of the brain that usually processes emotion instead processes shapes or colors; that the very neural organization of the autistic brain is dysfunctional. And somehow, it seemed the very pathways of Charlie's brain were reshaped through the repeated trials of "do this" and "touch 8" and "stand up" and the infinite enthusiasm of the therapists for motivating him: Arielah lifting him onto her shoulders, Andrea rubbing his back and giving him hugs, Lindsay with her slow smile and dogged determination, Kristy giving him rides up and down her knees while singing "The Grand Old Duke of York," Beth grinning after turning her back to him, Tara shaking her keys so temptingly and letting Charlie hold them if he tried to say "dees," Stella's wild Jetson rides in the little purple chair.

Those days are long gone but it's the same ABA teaching that has taught Charlie to put on and wear his bike helmet and to ride his bike, without the training wheels, to use the brakes, and to stop when his dad says "Stop sign, squeeze brakes!" Autistic children learn differently. Charlie did not imitate NOT because he did not want to, NOT because he "preferred" to be "in his own world" and "withdrawn," as in some incorrect, just plain wrong, and scandalously misguided Bettelheimian formulation of autism as a psychogenic disorder. Charlie had to be taught to imitate, to do what others are doing, because of the way his brain is neurologically organized. There are certain fundamental aspects of learning that we tend to take for granted that do not seem to be neurologically wired--Aristotle would say "natural," "symphyton"--into Charlie's brain and he has to learn these skills, on top of things like learning to read. Teaching Charlie is much more than a matter of breaking down a task into small segments and teaching each, though this "discrete trial teaching" has certainly taught him much. Charlie likes talking but concrete words like "red" or "sushi" or "frog hopper" carry enormous meaning for him, and I trace this to the unusual neural wiring.

So Charlie's education must be different--often one on one, highly and rigorously stuctured according to principles of behavioral science (and while this might not be the most appropriate education for all autistic persons, it has proven very successful and motivating for Charlie)--but those early days of hours of ABA therapy have had a permanent effect in his awareness and understanding. Why we need to keep the Hackensack River clean so egrets and eagles will fly by, and why people who can afford luxury condos should not have exclusive rights to waterfront housing, and why Big Business should pay to clean up those chromium deposits in Jersey City: Charlie needs this education as much as you, me, and some real estate magnate with dollar signs for eyeballs. Charlie delights in the beauties of this world, and it was people--Arielah, Kristy, Andrea, Beth, Lindsay, Stella, Tara, whose "wowos photos" he asks for everyday--who taught him to love these beauties, and them.