Sleeping With the Garbage: Notes Towards the Autism Comedy (#25) 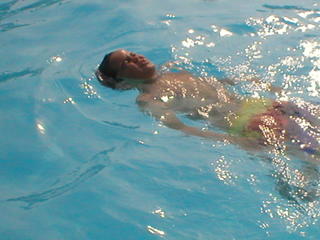 I was going to call this post "Everyday I Have the Blues" in part because I had that on in the black car and Charlie listened rapt and back straight. And in part because the words and spirit of the song--the raunchy, laughing-at-you-all-and-what-the-heck horn, B.B. King's smooth tones making you have to smile sillily at your small faults and venial misdemeanors--express the truism that we can't help but be down sometimes--we're all human, aren't we?--c'est la vie and some other Frenchism that is not coming to mind. The words should be sad, but the music is too lively, Well worries and trouble darling, babe you know I've had my share, I'm ready to jump up and grab Charlie's hands and do a fast step together.

And, "Everyday I Have the Blues" is a sort of mantra for A Day In The Life of An Autism Parent. Charlie and Jim and I have a lot of good times--like tonight's random ride 'round the finer 'burbs of New Jersey with a stop at a Friendly's for that great American summer treat, ice cream (I'm going to have to deflate your images of us 3 standing around with dripping ice cream cones and chocolate jimmies by recording that, as Charlie is on the gluten-free, casein-free diet , he got orange ice)--we have the good times and then we have those behavior squalls that, like a storm at sea, can arise out of nowhere. At the playground this evening, Charlie was so absorbed in checking out the contours of the weedy grass with its buglife that he forehead-first walked into an air conditioner unit (he's a bit uncoordinated, is my boy). In the past, annoyed at his own inattentiveness, or distressed at that ouch feeling, he would have hit his head again on the metal. This time, a look of utter seriousness crossed his face, and then he walked away.

Charlie hitting his head on some hard object, and then hitting it, purposefully, again, used to happen because (I think) he was trying to acknowledge that he had indeed knocked his forehead onto something. In The Mind Tree, Tito Rajarshi Mukhopahdyay, a young man with "severe" autism," writes about how his body and mind are utterly disconnected, to the point that he once touched a moving fan, even though his mind told his fingers that this would be dangerous and painful. We speculate that Charlie experiences a similar disconnection between his mind and his body but, with a vocabulary of "I want [X]'s," proper names, and numerous nouns, Charlie cannot explain this verbally. But today, after going head to head with the AC unit, Charlie knew immediately what had happened and one accidental bonk was enough.

Charlie does provide clues of what is going on in his mind through his behavior and his actions, especially when you start to see that there are patterns after analyzing your collected observations. Five out of seven evenings, Charlie picks up the kitchen garbage can--lock, stock, and barrel full of apple cores, coffee grounds, empty juice packs, junk (snail) mail, uneaten cereal and hot dogs--and carries it, in happy glee, to the foot of his bed. After he's asleep, I sneak the garbage back downstairs, tie up the bag, and Jim takes it out in the middle of the night.

Whether you're disgusted, or baffled, or pitying we who, in the middle of the night, hasten out to the driveway with a smelly trash bag---we've grown accustomed to a certain laugh-with-sigh combo when Charlie stomps past us, can in hand, and mounts the stairs. Jim used to groan at the scent of my "graduate student coffee" infusing our living quarters, but Charlie does not seem to mind the scent of day-old fish fillets one iota.

Once upon a tougher time, a lot of things went into the garbage: Barney. Barney videos. Teletubby videos. (I can hear cheers all across the entire Internet--all I can say is, how Charlie loved them and how he did learn that Gingerbread Boy story thanks to Oscar and Felix!). A lot of kiddie music CDs, cracked in half by a strong seven-year-old. Alphabert, a toy computer who used to have the prime place beside The Purple One in Charlie's bed. In those times, we would wait till the end of the day to "turn on Barney" as a reward for Charlie having a good day and, within a few minutes, he'd have his head on the floor. Our puzzlement was profound; since then, we've learned that what was going on was some kind of anticipatory anxiety in Charlie. All he wanted was that Barney video (the shapes and colors one, with Rainbow Beard and something about squares and circles too!) but, when he got it, some worry (?) arose and there was his head on the floor, and finally the videos just went to the garbage.

After a few months, Charlie discovered that you could retrieve the garbage from the can in the driveway. Soon, heavily scented bags of days old refuse showed up in stations around our house. I think Charlie figured, if he could keep all the garbage in the world within sight (I'm not even going to say how the mind boggles at the thought--would all the world's cell phones alone not fill Giants Stadium to the brim, if not overflowing?) in our house or, best yet, in his bedroom, then his prized possessions could always be accounted for.

What can I say? "My kid sleeps with the garbage, how about yours?" And then there's those five sushi trays in the hallway ordered all in a row, which I was at least able to rinse out before Charlie was at my back saying "I want sushi tray" and squirreling away his booty. (Not that Charlie's ever been able to hide something without us finding it--too often, he arrays his prizes in plain sight, parallel to the living room floorboards--so he can find them easily, and Me the Mom, too. When Charlie "hides" things, they are in places that I've shown him, like the time when (without me in the kitchen) he stored his lunch box under the sink, which is exactly where I put it on Friday afternoons.)

When you see me worryin' baby, yeah it's you I hate to lose

"Comedy," says Aristotle in the Poetics, "is, just as we have said, an imitation of the lesser type......What is funny is a defect or some 'shameful' thing that is not painful or destructive." Charlie's sleeping with the garbage could curtail with this definition: It is true that ye average human would probably not want to sleep with the garbage (an image of the bearded guy who's found in a garbage truck in Goodfellas comes to mind), though (pace, Aristotle! it has been many years since you were The Philosopher) I do cringe to say it's "defective" and even "shameful" to see Charlie doing what he needs to do. It means little to Charlie that garbage is a socially negative phenomenon, consigned to dumps and landfills. He needs to keep the garbage at the foot of his bed as much as the boy in Mercer Meyer's There's a Nightmare in My Closet needs to tuck the nightmares (one of them, at least) into his bed. And I have to laugh and, once my guy's asleep and the garbage is where it should be, I'm up the stairs once more to stroke his big forehead.

Well worries and trouble darling, babe you know I've had my share.