Home Archives Profile Subscribe
Charlie and the Full-Hearted Prince (#26)
What If My Child Never Talks? (1): From dahdahdah to "Mommy I need help!" (#28) 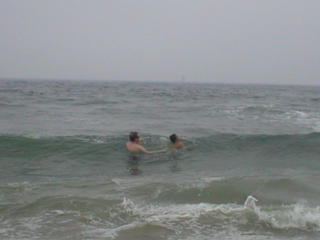 "Breakfast, school tomorrow, mini waffles," Charlie said this morning. We pointed out that it was Sunday and he had one more day of his weekend. Charlie is still learning how to read the calendar and we've yet to tackle telling time, but he certainly has an understanding of the days of the week, the various hours of the day, and of more hazy concepts such as the future and the past. The hard part is that, often when we try to explain that something will happen to Charlie--that we'll be at the beach house for vacation in August--or that something has happened and is over--that he used to have Alphabert, his toy computer--he gets stuck on the words in a very concrete way and wants the beach house and Alphabert now. Looking at an actual calendar, using a picture schedule, narrating a social story, are some methods that help autistic persons understand concepts of time, and we are gradually working on these with Charlie.

Often, I think, Charlie is fine with the notion that he has to wait a week until his birthday, or it'll be an hour until dinnertime, or he has a month of summer vacation from school, or he only has ten more minutes in the dentist's chair. But when we talk about these ideas--when we put them into language--Charlie's mind rushes to focus on the birthday cake, the white rice and chicken, being woken up early every weekday morning, the dental tool grating on his teeth, and he panics, either wanting the cake right now immediately or cringing at the imaginary feel of metal in his mouth.

"We'll be back!" Charlie's been saying that frequently of late, and often with a smile. We first said it to him five summers ago when we were leaving our rented beach house at the Jersey shore to return to our then-home in Minnesota. Charlie cried buckets and hollered to the hills as Jim carried him, squirming to stay on the beach by the ocean with a life-or-death kind of desperation. "We'll be back, buddy, we'll always come back because you like it so much," Jim said softly to the wriggling, sobbing boy in his arms as I trailed behind with wet towels and the beach ball. Charlie couldn't talk in those days but Jim was sure he heard something: "He's trying to say it, he's trying to talk! He is. We'll be back, pal."

Jim was right. Now Charlie looks at a photo of himself on the beach while proclaiming "we'll be back!" When we ask him when we're going, he says "in Aw-gust." When we ask him how long, Charlie says, pupils sliding to the corners of his eyes, "for two-weeks, two weeks in Aw-gust adda Jer-sey shore."

We loved the shore so much we drove for two and a half days to see it when we were living the Midwest: The Mississippi and all the lakes in Minnesota have nothing on that ocean. So now that we're living in close proximity to the Garden State Parkway, regular day trips to the beach are in order in the summer; Jim and I mumbled this to each other in code early on Sunday. But, when Charlie and I were one minute into a morning walk, the skies opened and down poured the rain (Charlie was determined to make it to the playground, so I sacrificed the Style section of the New York Times as a meagre umbrella, until, ten steps later, we both got so drenched we had to go home.)

It had been a weekend of water, sweat in the humid air, bottled drinks, the over-chlorinated pool, Charlie's requested "hot shower" after swimming, the Hudson River yesterday, tears here and there and---the Atlantic. The sun sort of came out, we grabbed our swim stuff (minus a much-regretted extra pair of shorts for Charlie), jumped in the black car, and down the Parkway we went. Within five minutes it was pouring; by the time we got to the shore, it was as gray as the whole weekend had been, but--after a twenty-minute lightning warning--Charlie was swimming in the ocean (click to see a Quicktime video), jumping and diving under the waves, trying out his backstroke, and attracting the happy regard of some older gentlemen who told us "I used to be just like that in the water." In Peter Beagle's The Last Unicorn the unicorns are trapped in the waves and just visible in the foam. When Charlie turned his face to the shore and let the ocean gather him up, there he was, on high, his face in the crest of a wave, just as those mythic white beasts in the story.

Charlie is at his most alert, and most serene, and most able, in the water. Waiting for his dinner of "fries ann shrimp" he told me a definite "yes" when asked if he needed the restroom, but too late. (Hence the much-regretted extra shorts; I guess there is a reason for Wet Ones.) Driving back up the Parkway in deep mist and fog, the salt-seaweed-mollusc-fishy scent of the sea filled the black car, even with the air conditioning on.

"Even inland," he said with satisfaction, "you can tell we're near the ocean."

"We'll be back," Charlie chirped. He looked right at me, giggled, and grabbed my top and lower lips with his fingers and squeezed hard, saying, "We'll be back! Beach house!"

"We'll be back. Beach house!" I repeated and Charlie shivered in delight at my words.