Home Archives Profile Subscribe
"We'll be back!" (#27)
Charlie the Flexible Flyer; or, Avoiding The Curse of the Rewind Button (#29)

"Turn on Barney! Turn on Alphabert!" Charlie grinned up at me from his pillow as he was settling down to sleep. A devilish-happy glint came into his eyes: "Turn on Grandma Grandpa!" It is the case that Charlie's grandparents tend to stay seated when we go over to their house and, lately, Charlie has taken to grabbing Grandma's hand and trying to pull her out of her chair. But saying "Turn on Grandma Grandpa" told me that Charlie figured there must be a way to get his kindly grandparents "up and running," and that this might be analogous to pushing a button on a toy--just squeeze Grandpa on his elbow and watch him go! 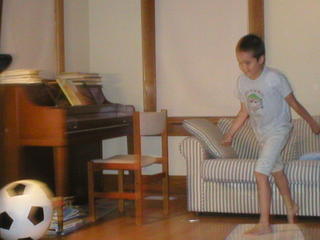 For many and even most of us, language is how we convey ideas, thoughts, beliefs, feelings. Language just "happens" for the majority of the population, as a pediatrician in St. Paul explained to me, wondering about the lack of language in a then seventeen-month-old Charlie: "You know he wants juice, you don't give it to him immediately, you say 'say juice!', he says 'joo' or something like that, you say 'good' and you give him the juice. The next time, you wait a little longer until he says 'joo' or maybe even 'juice' and then he'll be saying it on his own." A few months later, when another doctor asked me "does he know what his hands are? does he know his name?", I looked at my toddler boy and I said "No."

Yesterday I noted how, in the summer of 1999, a just-over-two-year-old Charlie could not talk. Charlie was officially diagnosed with autism on July 22, 1999, by the Child Development Clinic of the Minneapolis Children's Hospital. The only recognizable sound he said then was dah and what it meant I was not sure, or maybe all it meant was nothing at all. In the placid months of Charlie's babyhood, there had been many cries, differently toned and pitched, cries that said (I imagined) "I’m happy, I’m hungry, I’m tired, here I am, that was good." By Charlie's first birthday, I was pleased to note four “distinct sounds” that were repeated with a certain frequency: mmmm, for me, Mommy; dah, for something “out there,” sometimes for Daddy; ugi, a sound of contentment after a good feeding (Charlie nursed till he was thirteen months old); eeee, a general sound for excitement and interest. Very good, the pediatrician’s response when I reported my list. How sweet, said the grandparents. Great start, said the daycare teacher. And then all those sounds slipped away until there was only dah.

In those days, spring and summer of 1999, Charlie screamed, a lot. He screamed when he wanted something. He screamed when he could not get something he wanted. He screamed when he got what he wanted. In April he hit his forehead with his hand and we thought the world was ending. Charlie would eat nothing but chocolate chip cookies; he would not budge from that drop of red paint at the Selby Avenue playground with the steep metal slide. “He’s a handful,” said a man dining with his wife at an adjoining table in a Vietnamese restaurant where we were making our way through dinner one evening. As an afterthought, he looked at Jim and said “Nice shoes--where did you get them?”

Charlie talks because of hours, weeks, months, and years of speech, ABA, and verbal behavior (VB) therapy. In addition to having (like many children on the autism spectrum) severe difficulties in using language socially to communicate, Charlie also has apraxia, a motor-planning disorder that can result in him slurring his consonants and not articulating his words properly.

The main reason Charlie can talk today is because of his intense ABA program that taught him to imitate (in Learning How to Learn (#19), and because we were fortunate that one of our first ABA therapists was a speech pathology graduate student named Tara. “Charlie has to talk,” Jim said. “Yeah, he does," I said but I thought, what if he never talks? What if he can’t talk? In late fall of 1999, we asked Tara to integrate speech and language into Charlie's therapy sessions in whatever ways she could. At first she used the PECS book the school speech therapist from the public school had made for Charlie. Then one day, Tara had a new idea.

“I’m taking a sign language class. What if I teach Charlie a few signs--then he wouldn’t have to say anything, and he’d always have them to use.” This sounded good to us. Tara taught Charlie to sign for "cracker" and "chip" and then, "I want cracker" versus "I want chip." She broke Charlie’s favorite Holgrain Crackers from Louisiana rice country--cardboardy rectangles--into tiny pieces. Saying "do this" softly, she modeled a few quick shakes of her elbow (a modified sign for "cracker"). Charlie had all eyes on Tara's arm and moved his, and got his cracker bit; Tara did several trials of "do this" until he got it, and enough cracker bits to make a whole one. She emerged triumphant from his room, a few last bits of cracker in her palm and Charlie right behind her.

"What do you want?" Tara asked him.

"Cracker" said Charlie, or rather his right elbow moved. Tara gave him a piece and Jim and I cheered and clapped and, I can't remember, hopped up and down, in joy.

In the months to come, Tara added sounds to Charlie's repertoire, pairing "uh-uh" (for the two syllables of "cracker"--at that point, Charlie could not say the k sound) with the "cracker" sign and he learned that quickly too. And he was on his way to talking, to communicating. We tend to think that talking makes us human, that language makes us human; that it is our ability to use words to communicate feelings and thoughts with each other that makes us different from other animals. But I think it is rather that we have the urge to communicate, to connect with another person and with what is going on in her or his head. What Tara got going in Charlie was precisely this urge to communicate. She taught him sign language and speech to give him the tools to express himself; whether a person uses language or PECS or a Dynavox or writing, the desire to make contact with the world is in all of us, waiting to be tapped.

And Charlie has plenty that he needs to tell us: "I want Daddy here. Eat hot dog. Anne Marie twinkle star. Boo-berries. I want green grapes, grapes, I want grapes. Helmet on bike ride Daddy! Great job Char-wee. Char-wee Daddy Po Po. Char-wee Barney Alphabert, Char-ee Barney airplane book cow jumping over da moon!" Tonight Charlie recounted the entire story of "The Gingerbread Boy," with him in the starring role, running up the stairs while yelling "higher higher higher higher higher," and then, when he got stuck clinging to the curtain rod on the window sill, "Mommy help get down. Mommy down!"