Home Archives Profile Subscribe
"You can observe a lot by watching" (#47)
Charlie On My Mind: Simon Baron-Cohen on Autism and "Theory of Mind" (#49) 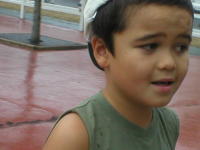 Charlie's schedule was disrupted this morning when we drove to a verbal behavior session at 10am, the first time he's had one in the morning. He was sleepy at first then perked up, then less focused during speech with Danielle (who has usually been coming to do speech on Friday). He called for "suit on," we went to the pool, and were the only ones there, aside from the water polo-playing lifeguards. The snack bar was closed so we were unable to get the usual "pool fries." After dinner, Charlie asked "walk, yes" and pointed south and we made the rounds of the neighborhood till dark fell.

None of these activities was out of the ordinary, but what was extraordinary was that Charlie was not bothered by these subtle departures from the established order of things. As we sat down to a late lunch, I opened The New York Times to The Male Condition by Simon Baron-Cohen of the Autism Research Centre. Dr. Baron-Cohen's most recent book, The Essential Difference: Men, Women and the Extreme Male Brain (2004), explains his theory of autism, that it can be "understood as a form of the extreme male brain"; today's article, The Male Condition, restated his theory in connection with the remarks by Lawrence Summers, president of Harvard, that women are "innately less suited than men to be top-level scientists" (to which Dr. Baron-Cohen states that Summers is "wrong to imply that these differences render any individual woman less capable than any individual man of becoming a top-level scientist").

Briefly, Dr. Baron-Cohen notes that there are "physiological differences between the average male and the average female brain." Psychological testing--on the visualization of an object after it has been rotated in three dimensions, on map-reading; on sensitivity to emotions and social cues, and language ability--reveals that males tend to have greater aptitude for the former, females for the latter. (Note the word, "tend to.") Dr. Baron-Cohen has "summarized these differences by saying that males on average have a stronger drive to systemize, and females to emphathize." (Note the term, "on average.") He has also conducted research on levels of prenatal testosterone, and notes that higher levels result in less eye contact and slower language development in a child. Dr. Baron-Cohen points out the "social disability in autism" which makes empathy difficult, as well as how "people with autism often develop obsessions, which may be nothing other than "very intense systemizing at work." His examples include train timetables and "the names of deep-sea fish." I've noted Charlie's daily litany of "beach house ocean boogie board fries shrimp"; his recitation of past and present therapists' names and their car colors; his "rage for order"; his careful placement of a soccer ball, a green rabbit, and the movable furniture in our house perpendicular to the floorboards (which I lightly kick around when Charlie is not looking). When a child insists that a trip to New Jersey must involve a meal at "M & M Steam Bar," this desire for order, for a system, is the way that a child's mind can hang on to the cluttered experience of the world.

When I first heard about Dr Baron-Cohen's "extreme male brain theory" I thought the notion, well, extreme. A Newsweek cover story on Boys, Girls and Autism: Is this mysterious and sometimes devastating condition just an extreme version of normal male intelligence? did not help, especially after a post was sent round my New Jersey autism email lists seeking twins, the boy having autism and the girl typical for the cover photo. But after reading Dr. Baron-Cohen's work and hearing him speak and respond to a lot of questioning at the Eden Institute/Princeton Lecture Series on Autism in June 2004, I've found his research offers some clues to understanding autism, or at least to understanding our experience of life with Charlie.

It is a fact that autism is more common in boys than in girls (in a ratio of 4:1); a glance around all of my son's autism classrooms easily confirms this number (and even suggests that the ratio is more 5-7:1). But how can autism simply be some kind of "maleness" expressed to the nth power? Social and communication impairments are some of the charateristics of autism, as I'm everyday aware when Charlie suddenly calls out "Grandma baby" and giggles hilariously: Not only is Grandma (as I tell him) too old to have babies, but standing in the check-out line is not the place to yell such private jokes (what would Grandma say!). An article in Wired magazine a few years ago, The Geek Syndrome, noted "something dark and unsettling is happening in Silicon Valley," namely, a significant increase in autism and Asperger's among children of computer programmers and engineers. Might it be possible that "the minds that have made this area the technological powerhouse of the world" contain the DNA, the "genetic predisposition," for autism? "In the geek warrens of engineering and R&D," the article noted, "social graces are beside the point."

The Geek Syndrome included an interview with Dr. Baron-Cohen, whose earlier book, Mindblindness: An Essay on Autism and Theory of Mind I had read when Charlie was four years old. In the Wired interview, Dr. Baron-Cohen spoke about how the autistic mind has a "proclivity for systematizing" while, due to the lack of a theory of mind, autistic persons are "mindblind" and lack empathy. (More on this in my next post, #49.)

Today's Times' op-ed, The Male Condition, led me to reflect how, like many parents, Jim and I bristle at the efforts of scientists to systematize our messy experience of life with autism and Charlie. I have never met a man (male) more empathetic than Jim, whose connection with Charlie is visceral and beyond loving; I'm the force of order in our household, and it was my own linking for orderly systems that led me to spend my high school years memorizing ancient Greek grammar and Bach fugues from The Well-Tempered Clavier. But Dr. Baron-Cohen is on to something with his theory about the "systematizing" male brain and the "empathizing" female one, by which he refers to a certain "male profile," to a cultural understanding of what it means to be male and of what it means to be female. His theory is, as he writes, "potentially controversial and perhaps unpopular among those who believe that the cause of autism is largely or totally environmental." It is a theory that coheres with many aspects of our experience of life with Charlie.

The "rage for order"--the constant systematizing tendency--of an autistic child is evident to me all the time and this is precisely why ABA is such an effective teaching methodology for Charlie. Charlie "learned how to learn" not just and not only because of the loving dedication and enthusiasm of the archetypal "Stella, Kristy, Tara." Charlie learns through ABA because it is a highly-structured, intensely orderly way of learning. The science of behavior analysis did more than "breaking down" (as is done in "discrete trial teaching") a task into small components, each of which is to be learned one by one and chained together. Behavior analysis breaks down a task into an order that Charlie and many children like him are neurologically wired to understand. Behavior analysis presents the world to Charlie in a system that his brain can readily grasp. 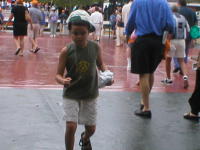 Tara once said to me that, once she figured out what motivates a child with autism, she could get right to work teaching that child. One day she happened to jangle her keys in front of Charlie and he thought that was the bees' knees; that became one of her best reinforcers, not because Charlie had some liking for keys, but because Tara knew how to make a bunch of keys worth all the gold in Fort Knox. She waved them in his face fast and slow, she crowed "I've got keeeeeysss!" and when he reached to grab them, she swiftly yanked them back and he howled with laughter.

Our best ABA therapists often displayed such a mix of empathy for Charlie and his needs, and an innate understanding of why a systematic, highly-structured approach was the best to teach him. Our home ABA program was rigidly structured and a lot of fun for Charlie, in no small part due to the therapists' neverending ability to pull out new bags of tricks by flying him around in a plastic chair or giving him a ride on their knees while singing "The Grand Old Duke of York." (Similar fun and laughs have been stoked by Ali G, aka Sacha Baron-Cohen, Dr. Baron-Cohen's cousin, and fiancé to an actress in cousin Bob's movie.)

After the Eden/Princeton conference, I happened to be on the same train as Dr. Baron-Cohen but--thinking the last thing he wanted was to be accosted by an autism mom with a bunch of questions regarding her kid--did not talk to him. I did (full disclosure!) respond to one of the Autism Research Centre's questionnaires, to test my levels of empathy and systematization (I don't know what the results were). Life with Charlie calls for a constant dance between accommodating his differences (walking with one sandal on, so he could feel the wet grass) and insisting on him following another order (ours--bedtime at 10pm--or society's--keeping both of those sandals on all the time). As the mother to my son with autism, I'm always, with kindly attention to his neurological wiring, calling him out of the desperate force that makes him push that rewind button and demand "Daddy fries shrimps" from 1pm until bedtime.

"Don't worry, sweetie," I find myself saying. "You don't need to keep doing that."

"Mommy, I want." This is Charlie's verbal call of desperation, a sign that he needs something to be some way right now or it's the end of the world and I know it.

"Charlie, we'll have plenty of fries and shrimp with Daddy at the shore," I say. And, rubbing Charlie's big head, "Everything will still be all right."

Stephen Shore would call this a "failure to display good social skills" ;-)