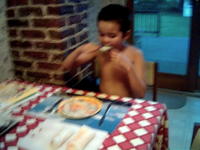 "Shopping cart, sushi." Charlie said this morning (after a trip to Pathmark for frozen gluten-free waffles), afternoon (in the car on the way home from his verbal behavior session), and night (after a 6 o'clock swim). And I said, "No."

Charlie (as you may have noted) likes sushi and, this summer, Charlie has been eating a lot of it. He had his first taste of "Japanese food" (as Jim practices with him) when my mom and dad bought a pack and figured he'd like the rice ("white rice" being a top-5 Charlie Favorite Food). He had a taste on and off for a few months and Jim and I snuck off with a California roll or the salmon and eel atop the little rice rectangulars. Then, one fine spring day, I thought I'd get Charlie a sushi lunch after a long bike ride. For months, Charlie's new mantra was "bike ride sushi" and then, on discovering where we got the sushi (ShopRite, in some cases--every grocery store around here, except for Pathmark, sells sushi), Charlie started to say "shopping cart sushi." It was impossible to enter a grocery store without buying sushi, to forestall Charlie at the melting point. Gradually, Charlie's requests for sushi started to occur earlier and earlier in the day--I'd pick him up from school and his first words would be "shopping cart sushi Mommy."

Had we created a sushi monster?

Not good, Jim and I agreed (while acknowledging that, from a cholesterol perspective, sushi was better than French fries). For a few months, I stopped taking Charlie to the grocery store (and endured months of frantic scooting into the store for paper products, oranges, chicken, cheese, shampoo, before hightailing it to pick Charlie up at school). After one night where Charlie's upset stomach erupted specractularly in mid-sushi eating, sushi went on the outlaw list, to my grudging relief. After stern pronouncements of "we are just looking at the sushi," I gradually reintroduced Charlie to the supermarket scene. Charlie understood and would press on the plastic covers before somberly trotting back to the cart.

One day, at the start of this summer, we were at the store and, throwing caution to the winds, I said to Charlie "Fine, one pack." And sushi was back, as a once or twice a week dinner option.

But over the past weeks, the sushi monster has been rearing its anxious head. Somehow Charlie and I have ended up nearly every day last week at a store and he's walked out with a pack of sushi (the most expensive; "it's the prettiest," a friend smiled at me). Charlie has a strong obsessive-compulsive streak (and is on medication for it). While he's so far shown no sign of tiring of a daily diet of his favorite, today I had to say "no." Like many children with autism, Charlie's brain is so wired that he has a strong inclination to keep every aspect of his life the same and shows a marked preference for routines and a resistance to change (as noted in Charlie the Flexible Flyer; or, Avoiding The Curse of the Rewind Button (#29)). And a big part of his education is to teach him to be flexible, to live with the change and variety of a world in flux. Tonight we have sushi, tomorrow chicken with noodles.

Charlie himself seems to sense when he's had enough of some favorite--a Barney or Teletubbie video--but in the past has had a hard, hard time giving up something evoking the feeling of "I'm-getting-kind-of-sick-of-it-but-I-think-I-still-like-it-and-can't-help-asking-for-it." At the age of six, he'd ask for his favorite Barney Shapes and Colors video, I'd put it in, he'd head-bang on the floor. But getting rid of the video was simply traumatic, however tired he was of them (and led to Charlie sleeping with the garbage). Charlie's verbal behavior therapist noted this same pattern today over some Barney videos he'd found at the therapy center and had been watching, at first with fervor and now with initial excitement that fades fast.

Left to his own devices, Charlie tends to choose fewer and fewer different videos, CDs, toys, foods; perhaps it seems an over-worry on our part, but we can't let Charlie whittle himself down to eating only wheat-free waffles (Van's brand, original and blueberry) and jumbo packs of sushi. It might be easier in the short run, but I believe it is my responsibility to teach him to accept the new and different, while still preserving a place for the old favorites (occasionally).

And whence came this particular food-obsession? Because, in his baby- and toddler- hood, Jim and I, Charlie in his "bucket" car seat in tow, frequented a restaurant in the suburbs of St. Louis (where Charlie was born) that sported the moniker, I Love Mr. Sushi? Because he's been on the gluten-free casein-free diet since June 1999 and needs his "something special from the store" since cookies with sprinkles, ice cream cakes, and rainbow cupcakes (and pizza) are off limits? (So here's Charlie celebrating his 8th birthday with, yes, the jumbo pack.) 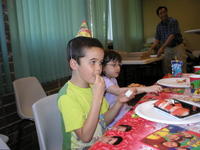 After digesting my "no" about sushi tonight, Charlie was quiet. "But you can have spring rolls," I threw in. "Sprinn rolls," said Charlie. "Yes, sprinn rolls." "Sounds good to me," I replied, and Charlie had five homemade versions of his "favorite Vietnamese food." As I tucked him into bed, he looked right at me and said "shopping cart," with a scampish grin and glint in his eyes. "Good night, best boy," I said. "Maybe tomorrow."