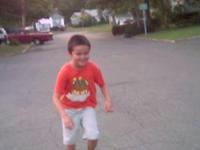 For the past few nights, Charlie has not fallen asleep until past midnight. It's just a few more days until our vacation at the Jersey Shore, when we actually will "stay at beach house." In past summers, Jim would watch him sleeping deep after days of sun, sand, and surf: "I wonder if he's dreaming of those waves." In "We'll be back!" (#27) I wrote about how Charlie's learning that we return every year for at least a week "in Au-gust" to the "beach house" has helped him to learn that he can leave something he loves, and yet return to it. Over the years, we've rented different beach houses, but the ocean is always the same, majestic and bigger than all of us, and ever changing.

Charlie is definitely a boy of summer and this has been a good one. To outward appearances, it may seem that we have been in a period of retrenchment. In the first weeks of 2005 Charlie learned how to read about a dozen sight words; in the next few (weeks, months), he went through a regression that led Jim and me to feel we were back to the frantic days of winter-spring-summer 1999, when "autism" was a new and not well-liked word in our household, as somewhat narrated in The stone wall, the spot of red paint, and a lot of bugs: From one hot season in Minnesota to the start of a New Jersey summer (#5). That hot summer ended with us setting up an intensive home ABA/Lovaas program and recruiting the therapists--Arielah, Beth, Stella, Kristy, Andrea, Lindsay, Tara--who Charlie has, as you know, never forgotten. Charlie was in a highly structured, highly intense home program for the next two years, after which, on our return, to New Jersey, he had the inimitable Miss Kathy as his teacher. More autism teachers and more special education classes have followed.

I don't know why "the regression" happened earlier this year. Like many families, we had left few therapies untouched--ABA, VB, biomedical, medication, sensory integration, craniosacral, music, speech, OT, and on and on--and here we were, with a boy on the verge of turning 8 years and old and nearly as tall and as, and looking into that dark place parents fall into at the first mention of the word "autism." My mother-in-law has uttered "God is good" many a time to us from a certain chair in her house, and, while there is plenty to do, Charlie is back to the "peaceful easy-feeling" little guy no one could fail to love. We got back into contact with our old friend Tara. We found our way to a fine center that does verbal behavior therapy. We are starting up another (modified) Lovaas program. I have my new job that has enabled me to pick up from the one I left to take of Charlie. Jim is back on the highways of his native New Jersey and rushing 'round Bronx and Manhattan streets. And today, I enrolled Charlie in an after-school program, after worrying about finding a babysitter for months.

Charlie, of course, has been worrying for an entire year about us actually getting to the beach house. His understanding that we are not kidding that he will "be back" is a sign of how far he has come. There has been a thread on The Me-List (an email list on ABA and autism I have been subscribing to for the past six years plus) on "recovery." When we started our ABA program in September 1999, the talk was all about "recovery," meaning that Charlie would become "indistinguishable" from his typical peers, with whom he would be mainstreamed.

In the fall, Charlie will be in a special-ed classroom and, as our starting up an ABA/Lovaas program indicates, we have a lot still to work on. But I will say, Charlie is "recovered" to the extent that he has been able to, given the neurological wiring he was born with. He can talk; he's got that alphabet down after so many years; he's a champ bike rider and a fish in the water; he loves people and being with them, from summertime guests (in The Magic Pill (#21)) to his grandparents on both sides and (especially) Uncle Rocco and Aunty Jen--to his very special "pal in Philly" to those long-remembered therapists whom Charlie and I frequently converse about. 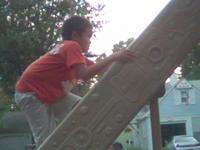 Aggravating Charlie's countdown to the return to "beach house" was the barometer falling and the increasingly humid air. As usual, he spent a lot of time at the pool at its bottom; I think the pressure of all that water on him is something he tries to replicate by wrapping himself in "Daddy's blue blanket" (a king-size fleece blanket). The grocery store was out of sushi and Charlie was okay about it. We took an alternate route to his favorite playground, where we saw many preschool age kids and their parents. Charlie got really excited, then slightly growly that he could not do "his thing" on the slide; then (as a dad mumbled to me), wet his pants and moan-cried on the half-hour walk home. 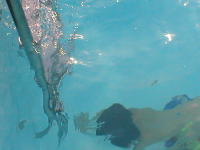 ABA and our therapists taught me to stay serene when Charlie is upset and I held onto his hand (or arm, or shirt) as we plodded through the streets. He demanded "water" soon as we were in the front door and even during his "hot shower": So he must have been hot, and thirsty, and it did not occur to Charlie that it takes a lot longer to walk home from that playground than to bike there. His demand for a certain systematic kind of play at the playground had been foiled, and upsetment had followed, and dissipated.

And the only water in our house tonight is not tears but those ocean dreams I posit Charlie is swimming in now.