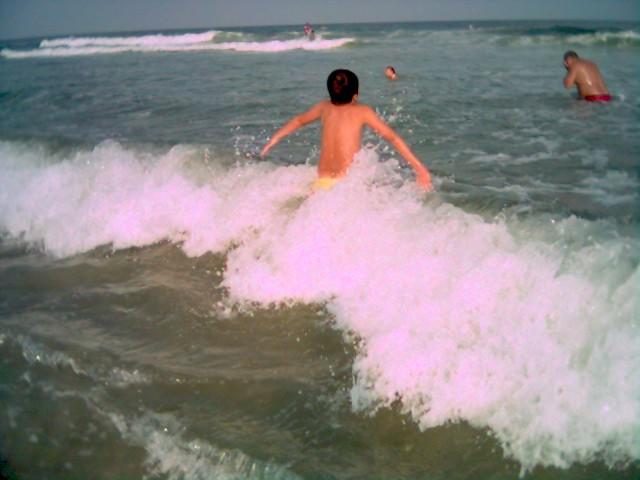 "I've never seen him smile so much," said Hal Saturday night as we watched Charlie ride the merry-go-round. A goofy Charlie had one sandal in his left hand and used it to tap a girl (with her dad right beside her). "He's trying to connect," Jim sort of sighed, recalling how, earlier, Charlie had stepped on another girl's sandcastle turret, provoking a verbal flurry from the annoyed builder. Up and down the endless-seeming span of the beach, Charlie ran in circles and poked in the sand beside another child, a parent digging in the sand with a toddler, a couple walking on the beach.

Charlie likes people. His own attempts at socializing are, all too often, "inappropriate," but it is hard to knock his evident desire for a social connection with others, fellow beach goers, Hal throwing him a football and taking Charlie's favored spot on the couch and being told "mooove." Charlie has been talking incessantly about his past and present therapists--"Annemarie. Kristy house. Looks like Stella, Miss Greene oo-ee. Danioh! I want Beth house, Claudette, Annemarie eata hot dog, Annemarie, twinkle star." Smiling big, Charlie hung around the driver's seat and passenger doors of Hal's car as he prepared to drive off Sunday morning.

"He's been talking more every hour," Jim noted on Sunday as Charlie played in the beach house, racing up and down the stairs. "Gong Gong Po Po Stella baby!"--because Stella's baby has a passing resemblance to my Chinese American parents? "Gong Gong boy, Daddy boy"--as Jim and our watched our dolphinesque child flattening out his body and propelling himself headfirst into a rising column of salt water. "Stop sign, cat!"--as we walked on the beach; we're still figuring these words out: Jim always points out the stop signs when they "squeeze brakes" on a bike ride at home, and we've been surmising that Charlie may be mispronouncing the name of a street.

Or maybe not: As we walked home from the beach on Sunday afternoon, a cream-colored, short-legged dog ran loose, towards Charlie, then around the corner, teenage guys in board shorts in hot pursuit. "Cat!" said Charlie, pointing. "It's a dog," I said. "Cat!" said Charlie, with great conviction. I thought back to the piles of flashcards and DK books (My First Word Book, My First Phonics Book) that his ABA and speech therapists and teachers and Jim and I had gone over with Charlie so many times. Something tells me that the first "cat" presented to Charlie was a side-view, with all four legs in view, the tail and torso stretched out and it's that silhouette that first occurs to him when he hears the sound cat. "Generalizing"--understanding that the sound cat refers to that picture, to the lavender Cheshire Cat in the Disney Alice in Wonderland movie, to a head-only view with whiskers and pointed ears fully in evidence, to the kittens in Goodnight Moon--is a way of thinking that Charlie, like many autistic children, had and has to be taught, and that has been built into the educational programs that he has had the most success with.

This difficulty in connecting the specific (the cat picture on one flashcard) to the general (the fact that the word "cat" refers to all the cats mentioned above, and many more) is another manifestation of Charlie's tendency to systemize. He has to be reminded again and again that "cat" means more than just that archetypal flashcard picture by us identifying, for instance, Tom Kitten in Beatrix Potter's book as "that's a cat, too!". If he's thinking about the concept of a cat, and saying "cat," he looks for something resembling that cat-in-profile flashcard, just as another mom writes of her son's "über-Teletubbies-systemizing". And that's why we spent the first day of our vacation explaining to Charlie that the "beach house" was not the grey one we rented last year, but the white one we've been staying in.

On Saturday night, Charlie only rode the ferris wheel, the Drop Zone, and the carousel at the amusement park--Jim and I prefer to limit him to a few rides. Too many rides, providing exactly the same mechanical thrill, over and over, make Charlie over-excited, hyper, "stimmy." But every wave in the ocean is different and you can't predict whether they'll come in big or small, foamy or thrashing or gentle. Charlie likes sticking his hands and feet in the sand and making little mounds and pools, and does not mind when they are washed away; he merely makes more. Then, sand on his cheeks and fingertips, he runs back into the water, Jim beside him.

"I wish I could bottle it up and take it back," I had said to Hal, about the peaceful easy feeling Charlie has at the ocean. Hal nodded, noting the beauty before us, and I thought about back home, where the swimming pool seems a chlorine bath surrounded by concrete and metal. 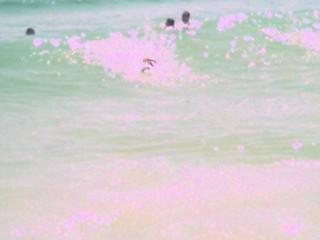 Here there is sand and water, and a feeling of something bigger than all of us. It was thanks to those endless hours Stella and all the rest spent teaching Charlie that he can know that "cat" does not only mean that one long-discarded flashcard, and plays beside other kids in the sand. Charlie is a natural swimming in the ocean but--thanks to being taught to learn how to learn--he has learned to hang onto the slippery boogie board as a wave rolls over him, to kick his legs, to paddle with his hands, to turn it around, to listen to Jim reminding him to do all of these things. The good teaching--the magic--of all of those therapists and teachers must have gotten stored up in Charlie and in us somewhere along the way. I saw it at work today in Charlie's smile as he swam his water ballet in the waves.