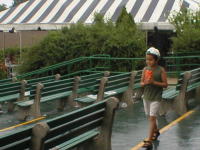 An ancient Roman poem describes Arethusa, nymph of a freshwater spring, looking "out from the crest of a wave." I always pictured her sticking her head (rather ungracefully, for an immortal mythological being) out of the top of a huge, foaming wave. Watching Charlie swim in the ocean has given me a clue to what Virgil means when he writes that Arethusa prospiciens summa flavum caput extulit unda, "looked out atop a cresting wave and held up her golden head." Charlie's been perfecting his somersault-flips in the swimming pool and he tried his new move out in the ocean this afternoon. Jim followed him out and, when a wave swelled up, Charlie just started swimming up the back of all that water and was carried on high and landed gently as the wave's crest subsided.

More than one autism mother has noted her child's more-than-affinity and sense of "coming home" in the ocean and this was Charlie, one with the cresting waves. On land, he dug ovals and lines with his hands and feet, buried his right palm, and needed some gentle nudges from Jim and me to get back into the water, where he swam far beyond any child his age. 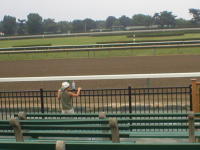 After the beach, we witnessed the 37th running of the Haskell Invitational (Charlie wore his dad's cap from the 27th when Holy Bull won, never challenged). Charlie was bubbly running up and down the wet grandstand aisles. I found him once with his sandals off poking his toes in a tiny puddle; I suspect Charlie's transferred his beach habit of walking barefoot to anywhere there's something interesting to walk on, a nice lawn, a patch of weeds, wet pavement. He followed us around in a drizzle that increased to a steady rain, munching a foil-wrapped burger in one hand and fries from a tall cup in the other.

A few blocks from our house, away from the ocean, Charlie pointed down a certain street and proclaimed, "School tomorrow, mini waffle, cereal." He became anxious--he's been on summer vacation and liking his lazy days, and looked at us with jittery eyes even as we said, "You'll be home with mom and dad. And have the mini waffles and cereal." Once home, Charlie said "slide" and led Jim to the playground and classroom window of the neighborhood school where he'd had his ESY program. For awhile, after showering and snacking, he kept repeating "school tomorrow, mini waffle, cereal," and looking at us until we said "Home with mom and dad, mini waffles, and cereal. And see Miss Cindy." 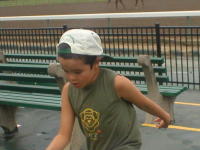 "You can observe a lot by just watching," Jim laughed to me, channeling Yogi Berra. Charlie definitely has a different way of interfacing with the world--language is a troubled medium for him and one word ('birthday") can set off paroxysms of anxiety--and it's only by watching his spectacular swimming in the ocean, his grimacing face as some worry enters his mind, that we have an inkling of what he's thinking. I love seeing him at the ocean, an elemental kind of place where he can just be; Charlie's the picture of a beach boy in his t-shirt, swim suit, loosely fastened Tevas, and tan. He was at home, too, amid the crowd of Jerseyites at the track, eyes fixed on the numbers on the board or their racing forms, anger publicly displayed when their horse didn't win or even place or show. Today was a Charlie-kind-of-day, on the go in the black car, up and down the Parkway, in and out of a few 7-11's to find the right kind of soda: We first got Charlie an Aruba Fruit Mix Sprite which he said "all done" to after a sip.

"He doesn't like the fruity ones," said Jim. "I've been watching him."