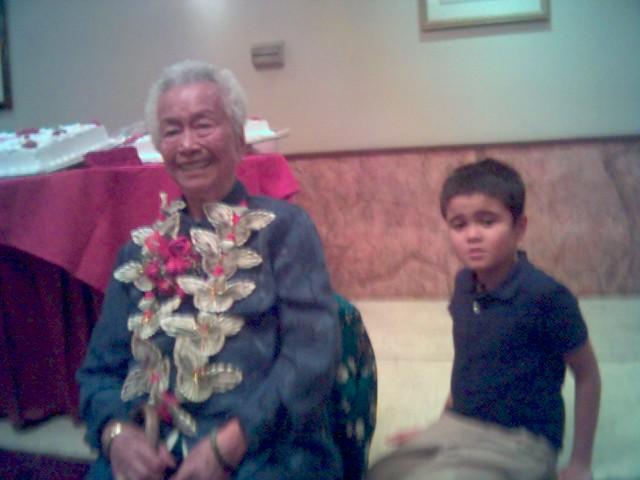 "What can I give your grandmother for her birthday--100!--?" my mother-in-law, Grace, asked me a few weeks ago. "Nothing," I said. "There must be something," she objected. "In Chinese culture, when you get older--70, 80, 90--you give presents on your birthday. A sign of your prosperity and good fortune," I said. "God bless her," said Grace and shook her head. 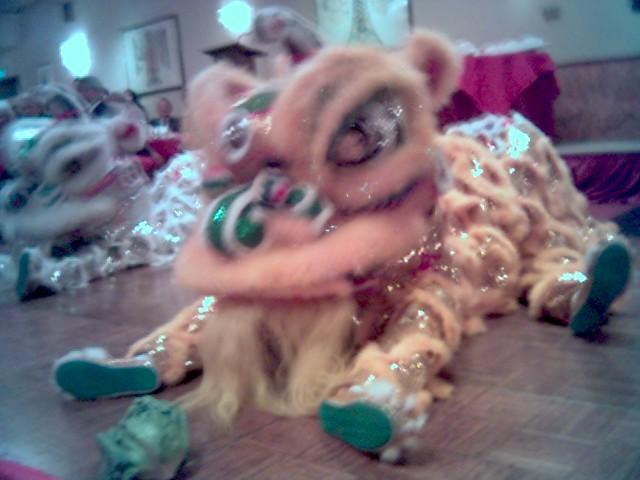 My mother-in-law did send a card, as one of my aunts told me this evening at the party. 250 invited, 251 attending. 26 tables; 3 great white slabs of sheet cake (which Charlie did not poke a finger into, after one reminder)- 2 lions--a white and a yellow--charging onto the dance floor while the drummer drummed mightily, and after 250 people popped 250 sheets of bubble-wrap.

"Sounded just like firecrackers," Jim noted approvingly. "Whose idea was that?" (Another aunt's.) Charlie--who has been given innumerable sheets of bubble-wrap as an activity "he can do" in OT and otherwise (in other words, it's no challenge for him)--needed no prompting to pop, or to clap at the wild prancing and pounding of the lions. He was astride Jim's back to get a good view and wore his crackerjack grin of delight. This lasted as he waited for the waiters to appear with appetizers of sliced meat, jellyfish (evoking memories of the Jersey shore) and pickled vegetables ("carrot"), shark's fin "soop," steaming bowls of "white rice I want white rice chicken," Peking duck, lovely green choy, chicken, beef in a potato basket ("it's like French fries" I said to a poke-fingering Charlie, who tasted the beef and gave it to his dad). By the time the last two courses--a whole fish and long-life noodles--were deposited on the lazy Susan, Charlie had had his fill of diluted "green drink" (7up) and was smashing the rice into designs on his plate. And not even asking for "cake fork."

I passed a significant chunk of my childhood sitting in the slightly sticky plastic chairs of some Chinese restaurant (in Oakland, usually, sometimes in San Francisco) and having parents, aunts, and (especially) Ngin-Ngin (Cantonese for "paternal grandmother") wheedle and/or insist that I eat something besides soy sauce-laced white rice and the pineapple and cherries from the sweet and sour. I was the youngest (and a girl) of six grandchildren who were a bit more like siblings, in that we saw each other regularly several times of month and, more than often, at Ngin-Ngin's and Yeh-Yeh's house on the edge of Oakland's Chinatown. I wore hand-me-downs from a cousin and my sister Jennifer. We ate fun si noodles and New Year's jai and Ngin-Ngin's herbal soup brews (or, we were supposed to eat these) on TV trays while watching Hogan's Heroes, Love--American Style, Star Trek. When Yeh-Yeh died in 1975, we missed a few days of school to attend the wake and funeral in black clothes specially bought and made, and I stood in a front pew with my five cousins amid a keening and howling I think of as equivalent to the ululation--the mournful wailing--of women in Greek tragedy and at the death of Hector. 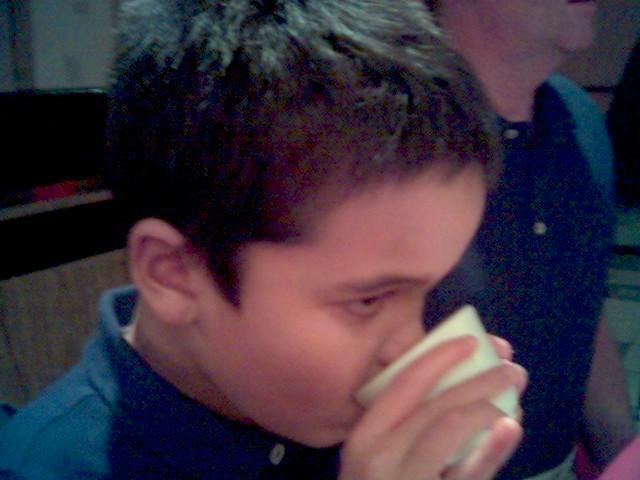 Thirty years later, here we all were a block or two from Yeh-Yeh's pride and joy, Tai Wah, his grocery store (bought for $500 from its Japanese owner, who was being sent to an internment camp...) and the spot of some other "business" doings. Here we all were, along with a cavalcade of "relations"--from the Lee Family Association, from her village, Hong Mi--and friends, and the crowd from West Oakland who cheered, and more, including one Clara Hanson who had been Ngin-Ngin's forewoman when she sewed parachutes in a factory during World War II. "I didn't know Chinese and she didn't know English," Ms. Hanson smiled,"and that's why we've been friends for all these years."

My cousins had prepared a PowerPoint of photos but the technology was down and they had simply to give their speech. Ngin-Ngin was interned on Angel Island on her way to Old Gold Mountain (the Cantonese for San Francisco, a reference both to the Gold Rush and to the notion of going to America to get rich); 25 or so years ago, I went with her, my sister, my dad, and some of my relatives on a tour of Angel Island to see the barracks where Ngin-Ngin had been detained. I was especially struck when the guide shone his flashlight on a hand-carved poem, in Chinese characters (and, as I would learn in college, in the style of poetry in the T'ang Dynasty), on the wallboards of one of the rooms in which the immigrants were detained. They wrote of wishing to fly free like an eagle, of looking out at the thick fog of the bay and the pain of the country, home, family, left behind.

Ngin-Ngin was able to walk from where the ferry left us to the barracks, but stayed behind with her friend, Jenny, not wanting to leave her alone. And tonight, with 250 guests (all younger than her), she was far from alone; shewill never be alone. At eight, Charlie is her youngest great-grandchild. Living in New Jersey, he does not see his cousins with the regularity I did, and so I pulled him in front of twenty-plus cameras aimed at Ngin-Ngin and her five other grandchildren, calling out "Charlie too." Being autistic, being disabled, Charlie will need the support of others when he is an adult and Jim and I are memories, are gone. He certainly enjoys the elaborate Chinese family meals and the ritual of gathering together, eating, sitting, planning the next meeting (meal). Charlie will need help for the duration of his life: I will not be with him to celebrate his 100th, however much I'd dearly love too. Charlie clearly enjoys the California lifestyle and I thought of him, again and again, as Jim drove up the coast on Highway 1 and we beheld the beaches of the cold Pacific that are surfable but not swimmable as Charlie needs to do on the Jersey shore.

Charlie has given Jim and me more than we can even try to give him. I hope that someday many more others will be the surprised recipients of the gifts of a boy who is tall, can't talk too well but can talk, and can do as much and more as he is asked to do. And we will all be richer for asking him to, and just for trying.