On a Pastoral Note 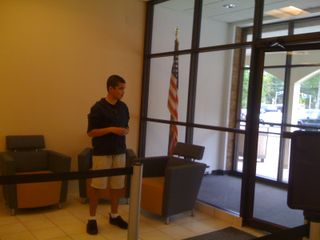 If you just went by what I've been posting here I guess I come across in part as a mother who writes a whole lot of emails and other correspondence to the school district, goes all emotional at meetings with said school district, dashes around to drop her son off at school and then to pick him (school district says he has to wear the helmet on the bus but it is not for us to put it on him), schemes to buy an extra everything bagel to have on hand for Charlie's lunchbox. Schemes further to set up "community outings" with Charlie, to the pool, the bank (that's Charlie in the photo yesterday afternoon while I dealt with a longer-than-usual transaction), the grocery store (which is easy, as a fair amount of what ends up in the shopping basket is for Charlie himself; happily, he carries the basket and his share of the bags).

But I actually do work, teaching Latin and ancient Greek and classical culture (this semester, archaeology) and some other things at my small college. I had to cancel a class last week to make sure that Jim and I could be present at that meeting and then wasn't able to make it to work Monday due to Yom Kippur which Charlie had off. Yyesterday, Tuesday, it was nice to be back to "business as usual" and so I plunged right into a discussion of relative vs. absolute in archaeology and then onto hoplite warfare, the age of the tyrants in the Peloponnese, how the Spartans took children from their families and trained them to serve the good of the state and didn't stint on "beatings and rough games," as our coursebook notes.

Though talk of warfare and of hoplites standing shield to shield in a phalanx and marching against their enemy, short swords at the ready, may not be without its relevance in regard to recent, ah, skirmishes we've gotten ourselves into with our "opponents." And then, the first word of the Iliad, Homer's epic poem of the Trojan War, is "rage," mênin.

In the spirit of being, as we ask Charlie to be, peaceful easy-feeling, the ancient poem that I had my mind on this evening as I drove home with Charlie sitting quiet and attentive in the middle of the back seat was the Roman poet Virgil's 10th Eclogue. The Eclogues are pastoral or bucolic poems; poems sung by and about shepherds and cowherds and neatherds watching their flocks on hot Mediterranean summer days. I've been playing around with the idea of translating all ten of Virgil's  Eclogues, and maybe some of the Hellenistic Greek poems that are their models, theIdylls of Theocritus, and I started the 10th Eclogue yesterday, and started muttering about how to do the second line as I drove.

But instead of mulling over lines and vowels and alliteration in my head, I realized I was saying the words out loud, working out the translation of

Out loud I said and oh so slowly:

Allow me this last labor, Arethusa,

my Gallus has got a few songs that must be sung

(Rough rough and partial first attempt, many more to follow.)

And, because I was voicing my translation attempts, and because I was in the car and Charlie was (not that he had a choice) listening, every consonant that I tried stood out as a distinct and unique sound. Because behind every /l/ and every /g/, the image of 4-year-old, 6-year-old, 8-year-old Charlie trying to pull his lips and stretch his tongue like ours and the speech therapist's so he could the same sounds as us: These images flashed through my thoughts.

I felt more attentive to the small words and sounds of English I was trying to render the Latin in than ever, thanks to the past 12 years of piecing together the epic poem about a certain hero, still so very young, whom I know.

I'm glad you're blogging more personally again. I missed Autismland, and while I was loyal to autism vox and autism dot change dot org... I only hung in with them because sometimes flashes like this would come up.

Such a beautiful boy you have there.

This is lovely. And, yes, his journey (and yours) certainly is the stuff of epic poems. Perhaps you should write one? You know, in all that free time...instead of sleeping! ;-)

I knew hoplology was the study of warfare, but hadn't gone thru the trouble of looking up the origin. Interesting.

The Spartans. The same people that had no qualms about putting their disabled children out on the roadside to die. They even had a committee to decide (the original "death panels").

I'll think of you while Sweet Pea and I practice her "blends" tonight. She's actually getting much better with speech therapy.

I have actually herded both sheep and cattle. No goats, though. I can arrange it that you, too can experience herding...

And about that meeting -- "goes all emotional"? I think not!

Trying to get these administrators to do something is more like herding cats! (with all apologies to the cats)