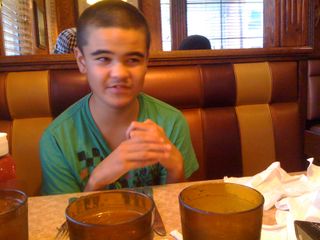 So I got home from a morning run to find that both of my boys and their bikes were gone on a biking/bagels expedition. A high-spirited phone call from Jim confirmed this (though the call ended abruptly as a dog was sighted, and Charlie got off his bike). Jim called once more to check about what kind of bagel I wanted (garlic) and I went about the morning weekend rounds of laundry, scrubbing the kitchen floor, making coffee, finally sorting through the unruly pile of socks in Charlie's room.

I was sitting down to read the news when the phone rang: Jim.

Charlie had stopped suddenly on his bike to look at something, think something through, something. Jim had no time to stop and---as we noted on and off to Charlie for the rest of Saturday---they had an accident. Jim went flying, but his main concern was Charlie. When Charlie was much younger, if he stubbed a toe or tripped, he'd sometimes hit his head  (as if to confirm that he'd injured some part of his body? to make something else hurt besides the body part that was)? He's much more coordinated now so falls and the like are rare and we've learned how to ease him through his anxiety bouts. But injured dad and upset Charlie with bikes on the ground added up to one challenging situation.

I had asked Jim if I should drive over to meet them but Jim told me to wait so I hovered on the sidewalk, nervously. It took too long for two black bicycles and their riders to appear,  but finally, there they were. Charlie rode up fast, got off his bike, handed me his helmet, and hurried inside.

Charlie often has a lag: He'll seem calm and unaffected by some (jarring) event (a bike accident and certainly a "three-man protective hold"). He might seem "fine" but it takes him an extended period of time to process an event and (from Jim's and my experience and observations) especially one that involves anything physical. Sometimes Jim and I have been able to trace a tough "tantrum/meltdown" to some earlier event, as if it takes some time for Charlie (a boy of many feelings) to work through all the fear, puzzlement, embarrassment, shame, hurt that he felt and does not speak about.

So we sat by Charlie the rest of the day and gave him the space he requested (by telling us "bye"). He curled up on our bed for a nap surrounded by a collection of blankets. Later, he started talking about "Barney, dog, book" and looking tense: Those are things he used to have when he was younger, and does no more, and he misses them?---that's my guess. Seeking to assuage his worried face, I repeated each word, said those were things he used to have, said it was good to remember them. After a few rounds of this sort of "conversation," Charlie smiled.

Jim and I were still watchful for the rest of the day. Charlie was glad of course to go to a Jersey City diner and couldn't make up his mind about a walk in nearby Hoboken. So we compromised and drove there and Jim talked to the staff at a book store where his book is on sale, and the day came to a quiet end with Charlie betaking himself to bed early.

The "lag" can carry over to the next day for Charlie and it's raining (no kayaking today, alas) so we'll need still to keep watch. Each day comes with its demands.

(One of which will be sorting out the socks, t-shirts, and miscellanea in Jim's and my dresser drawers)

Maybe it had something to do with seeing the dog. I don't know...Ben used to attempt to communicate things but his words were seemingly so indirect...language being a second language and all.

You are carefully listening. You'll give his words power that way!

TH has a huge lag in these things, and I've always imagined that in his mind, he's just rolling things over, processing, examining, distilling. Then, usually after the boys have gone to bed, he'll come to me and we'll talk about it. I'm guessing Charlie's way of letting it out is different, but we definitely have an enormous lag time.

What would it mean, do you think, if this isn't a lag, but if this is just IT?

You and Jim know Charlie so well -- all behavior is communication. I hope he's peaceful easy feeling today. xo

Yes, glad that both the boys are ok.

Glad your guys are both ok; hoping today's peaceful and easy feeling for you all.

I've noticed lately that when Nik is feeling *physically* unwell he tends to revert to what I would call "comfort" toys and items which he has long outgrown. Perhaps Charlie was feeling rattled and physically shaken from the accident and was simply seeking comfort in the only way he knew to communicate it?

Omigosh. Glad that both of the fellas aren't hurt!

I have fingers crossed that today will also proceed (relatively) smoothly.

Nice, Kristina. I'm guessing, and certainly not a professional opinion here, you just helped him take an incremental step forward in his stress handling skills. Drawing on happy recollections of comfort toys without the actual toys present. A solid emotional self control strategy.

Have been reading all the posts, but haven't had time to respond.

Sounds like Charlie did a pretty good job of dealing with the crash. Glad they're both OK.

Thank you, they're both ok, some scrapes and bruises---went out on the bikes again today once the rain cleared up.

@Rose, "language as a second language"---thanks for this, it's giving me a good way to think about Charlie and his communication.

@Emily, I am thinking it is just IT indeed. Jim experiences the same as regard to processing events and emotions. Those nighttime conversations with Th you've written about point me to a lot.....

@Niksmom & Dwight F, Charlie has long said "Gong Gong Po Po" and "Barney" when he's rattled, also to comfort himself. (Got the missing incident reports in the mail today---sigh, they wrote that he'd said some of things after those "protective" (yeah, for whom) "holds." I think one (stricter) (often ABA) mindset is to "ignore" such "non-contextual" utterances. But we know Charlie is just doing what the teachers keep telling him to do, "using his words": he's trying to express what he feels.

My new strategy has been to go right ahead and talk about those things, especially when he's not yet really upset but getting anxious. He's trying to communicate and needs validation that his efforts count.

We no longer have Barney (the stuffed toy) or another toy, Farm Families, that Charlie often mentions. Somehow, talking about these does seem to help him---if I keep it going in a certain way, he often starts smiling and I can almost see a cloud pass away from his face.

Yikes! Stopping suddenly can bring disastrous results when you're riding with someone else.
My husband is in several bicycle clubs, including one that sponsors long, long rides of hundreds of miles lasting several days and one of the basic rules of the road is never to ride too close behind another rider and if you need to stop, you first yell "Stopping!"
Can Charlie be taught to holler "Stopping!" if he needs to contemplate something of stop again for any reason?
Bike crashes are no joke; they can result in very serious injuries.
Another thing that the bike clubs suggest is taking some small dog biscuits along in case a dog runs up and starts barking at/chasing a rider. Scattering the biscuits distracts the dog so the cyclist can make a quick getaway.