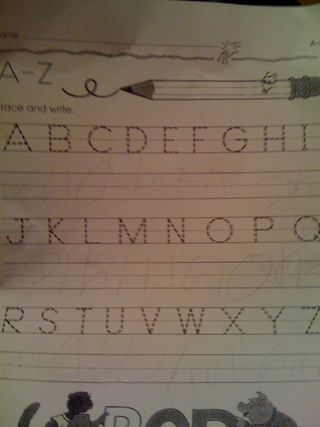 Charlie can write the alphabet. Ok, if you look really closely (he doesn't press down so hard with the pencil) at the worksheet in the photo, you can see that a lot of the letters have vaguely lowercase a or s on its side shapes. Being a proud mother, I not only made a couple of xeroxes (as below) of Charlie's worksheet; I am going to send the original to my parents. (They read my blog so I am spoiling the surprise.) 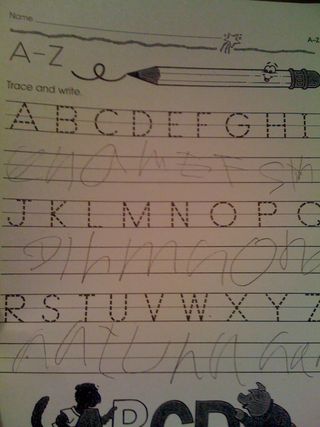 The first three letters on the sheet do look to be c, h, a, r. These would be the first four letters of Charlie's name. As this is the one word he has been writing over, over and over again since he was around five years old, it's no surprise that he starts auto-writing those letters when a pencil ends up in his hand. Everything changed with the E, and I could see Charlie's eyes dart up as he noted the E written in dashes on the line above, though the I seems not have made it onto the page.

Progress not perfection: That is the mantra with Charlie's learning. I could see how far Charlie's come with his writing not only by his formation of the letters but by his sustained attention to the movements of the pencil in his hand. By the time he reached M he was reciting the letters out loud while writing and I stepped back, and he wrote his way to the end of the worksheet. The letters that aren't quite right---like J rendered as D and an l for K

Yes, I've already hung up a copy of the worksheet on the bulletin board in my office. Frankly, I'm very fond of the overall loopy-curviness that runs throughout the letters, and especially as conveyed in the curl on the t.  (Eat your heart out, Helvetica?)

Over-reading a little, am I? It's that proud mother thing again, and, too, having waited more than a couple of years to see Charlie write his ABC's.

*the study of penmanship or handwriting

Nice work Charlie!
I love these types of discoveries... finding out a kid can do something I didn't know he (or she, the girl I work with does it quite a bit, and did it again yesterday) knew how to do.

I don't think you're over-reading. It sounds like Charlie can do far more than the school believed he could. And you knew that, but here's just more proof. Bravo, Charlie!

Does he have a weight on his pencil. It hasn't helped with the "pressure" on the paper but it has helped with control of the pencil.

Also, give him a pen, doesn't require as much pressure.

Also, we have "writing with symbols" (at school too) here at home, although we usually just use Wordperfect....

Who says you actually have to print. Little boy won't do those sheets anymore... needs to... but I think he's decided he's beyond them or they are just boring.

Keep up the good work.

"Progress not perfection" I love, love, love this phrase and plan to steal it and use it in every IEP from this point forward. He has beautiful hand-writing and you have every right to be proud!! Love these lightbulb moments!

Happy day! :) Yes, that sheet is definitely a keeper. Give him a hug/highfive for me.

P.S. I think you had mentioned before that you've floated the idea of typing for him. But I'm fuzzy on those details, now. Does he do much of that or show much interest in it? I know the reduced requirement for motor planning is helpful for some ASC folks to get into writing.

Matthew has been writing his name over and over for many yrs now, at one point he had his last name down.

This reminds me of the way Jeremy first started talking. When he was little he loved being pushed on the swings in the park next to our old house. Geek that I am, as I pushed him, I would recite the alphabet. This went on for months... and then, in the car one day, from Jeremy's car seat in the back seat, came a little voice "A...". I said "B...". He said "C...". We went on! And reciting the alphabet in time with the rhythm of the swing set became an interactive thing. And eventually, in play and preschool home-program, the visual representations of the letters got linked into the sequence, and then eventually the *sounds* the letters make...

Jeremy still prints, rather than write cursive, at 18, and writing has always been time-consuming and laborious for him. Computers help in some areas. In others we have to be creative about accommodations we ask for. He's cross-registered for a mainstream geometry class at the public high school where his high school program for autism-spectrum teens is housed, and we need to engineer an accommodation for him to keep up with the teacher's lecture pace, without running out of bandwidth spent on trying to copy everything the teacher writes (quickly, and not always that neatly) on the board. If he can always begin a topic by writing in big clear numbers the page numbers in the textbook where the topic is discussed, Jeremy can stop trying to copy everything down (after he's written down the page references) and just *listen*, and then go look up the textbook discussion to study the topic later. Jeremy's the only special-needs student in this teacher's class, and I don't think he's been asked to make accommodations like that before, so we have some work to do -- Jeremy as well as us, because we want him to get experience out of this in negotiating accommodations for himself.

Buddy Boy's printing is still pretty atrocious, but his cursive is actually not bad.

Good for Charlie for doing this. Who knows what else is out there just waiting to be discovered?

I have a theory about that cursive thing -- it requires less motor planning, because your pencil leaves the paper less, so you have to spend less time and mental effort getting it reoriented to write the next letter.

Thanks for all these suggestions---I do think cursive might appeal to Charlie as he wouldn't have to raise the pencil/marker so often from the paper.

Charlie hasn't been as interested in typing since the summer. I continue to search for ways to keep him motivated about writing---have been thinking of just having him write out some words a day and keeping this a "low pressure" activity.

OMG! This is awesome. Woo-hoo! Go Charlie! I am so excited for all of you! xm.