Back to the Old Gold Mountain 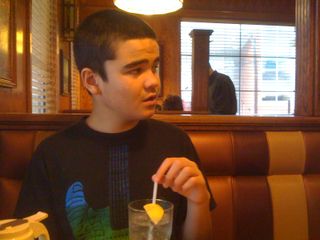 Charlie has been accepted into the big autism center. We will be meeting with the director and Charlie's case manager next week. I learned about this when I checked the voice mail on my office phone as Jim was driving Charlie and me for a quick diner dinner. I was due at the Newark Airport for a 7.05pm flight to San Francisco: Ngin Ngin's funeral is 9am this Saturday morning. Afterwards she will be laid to rest beside Yeh Yeh, my grandfather, on a mountain that looks west towards the San Francisco Bay, the Golden Gate Bridge and (as my dad has so often said to me) all the way back to China. We didn't dawdle at the diner. It's become wintry in New Jersey, with a cold rain. Not sure if Jim and Charlie will be able to make it out on their bikes this weekend while I'm gone, let alone kayak (though Jim noted that, should Charlie call out "kayak, yes," they will likely " be the twosome in the only vessel bobbling through choppy Barnegat Bay"). San Francisco, where I flew into around 10.30pm, was known as Old Gold Mountain to the Chinese who emigrated from Toisan in Guangdong Province. That's where Ngin Ngin and Yeh Yeh were from; that's where, in a kind of ultimate way, I'm from. San Francisco got that moniker because the Chinese who came over were, like so many others, in search of gold and riches (California was also called "Gold Mountain"). They didn't exactly find gold: Many found more hardship, and loneliness, and sorrow, and suffering, than they might ever have imagined---and many struggled through it all, and (like Ngin Ngin and Yeh Yeh) made it, though the road was often rough and rocky. I guess you could say we've been on a similar road so often in our life with Charlie. When times get tough (as they have been), it goes without saying, it helps me a lot to think of what Ngin Ngin and Yeh Yeh endured. There are times when I know that Jim and I just need to put our heads down, set our shoulders straight, and keep pushing, keep plodding, onward. As I got out of the car at the airport, Charlie looked at Jim and me and said "No. No." I opened the back door and gave him a fast kiss and one to Jim, and grabbed my bags. I'll be back with them tomorrow, Sunday morning; back on the long road together.

I can hardly wait: Life with my best friends of us is just too good to miss.

I'm glad that Charlie was accepted- now I'll keep my fingers crossed that they will be good.

I hope that your time with your extended family this weekend will be extra-nourishing as you remember your grandmother.

Have a safe trip.

I'm glad Charlie was accepted, too. I hope the helmet is a thing of the past. And that your grandmother's service is beautiful. xo

Strange they did not call you at home. Charlie is not involved with your college work Charlie lives at home with his parents as do most kids his age. Your baby has a right to be in school.
Glad you got word of his acceptance early in the weekend so you can look ahead .
It is normal to miss one's husband and child. It is generous of you and an honor to your family that you are with them.
Hang in there.

>> Charlie is not involved with your college work Charlie lives at home with his parents as do most kids his age.

I bet Kristina was anixous enough to see Charlie placed that she gave her work number so she wouldn't keep checking for messages at home during the day. :) I know I would.

Kristina, good to hear you are past that step. I'm a little puzzled that they didn't offer to do a home visit for an evaluation. But perhaps that's reading too much into it.

Were you able to let Charlie know right away, were you going to wait till you returned, or was Jim going to let him know when he got home?

good news on the autism center. Have a safe return flight.

we let Charlie know-----I think the visit on Tuesday was a sign that this was something of a done deal. i think the helmet will be faded out but if it can't be....ok, another thing to deal with---- I've asked the school to call me on my cell/home phone but I was always get the calls at work though I'm not in my office much; as it will.

thanks to all---just got back to my parents' house after the day's events and couple more hours before heading to the San Francisco airport.

>> I think the visit on Tuesday was a sign that this was something of a done deal.

Yes, it would make a lot more sense if Tuesday was a "getting to know you" meeting, and just a final confirmation that Charlie was at least roughly as you portrayed him.

I don't know what the rules are for accepting students with disabilities in NJ. I know in Alberta if you do, even as a private school [recieving public funding], you made a very firm commitment to follow through with that student for the entire school year. There was no backing out, not even attempting to back out, without severe repercusions.

Oops, didn't finish pulling that train of thought into the station. :)

So that last meeting could simply represent their due diligence on their intention to accept Charlie.

The district proposed this placement early this summer---we knew they had to place Charlie somewhere! We went to look at all the private autism schools this summer to see if Charlie could get into one, chiefly as many of those schools have no more than 30 students---this school is a big space, with a 200-something student population. (On the other hand, it is still a larger space than Charlie's current school, with far fewer students---1400 approximately at the middle school).

How could they not accept him? He is a wonderful child, a model student, and your family a positive addition to the school's community.

@Monica, you are too nice! He is a sweet sweet boy---when tough things happen, it's very apparent that he just has no control over what's going on, and feels really bad afterward. (sigh)

I hope things are better at the new school. Will they make him wear a helmet? How about a PCA, does he qualify for one? It would be nice for him to have a "friend."