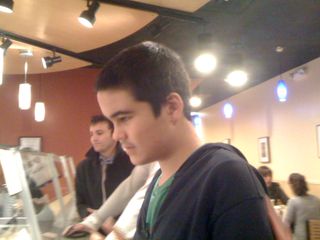 Friday morning Jim and I were to meet at 8am with the director of the big autism center. As we were running late, Jim dropped me off first at the center and took Charlie to school. While I waited with the director, the principal, and Charlie's case manager, I was able to take photographs of his new classroom, of the cafeteria and art and music rooms, of main corridors, of the entranceway. I also met Charlie's new teacher. Jim came after about 15 minutes. We'll be able to bring Charlie to visit once or twice before he starts at the center on the 16th of November. While we had (until the past week) received daily emails from Charlie's teacher (no emails for a couple of days....), teachers at the big autism center only write home once a week; a daily checklist sort of sheet is sent home. We asked if the teacher might write three times a week about Charlie for a couple of months; got a no; asked if she might write home twice a week for the first month: Ok. The conversation returned (as it tends to in discussing Charlie in educational settings) again and again to "behaviors" and Jim and I emphasized, emphasized, emphasized: Jim and I also talked about the effects---including the potentially psychological ones--- of restraints on Charlie. When the director asked how we handle "behaviors," we noted how, especially since this summer, we've learned to be much more attuned to Charlie's communication of his emotional states so that we pre-empty many "behaviors" before they turn into "really big ones." I said that I'd write up a (semi-)detailed sheet (I do, um, have a lot of records and writing about Charlie.......) about Charlie's communication, about how he communicates (verbally and non-verbally) that a neurological storm is on a-coming, about his extreme sensitivity to others' emotional states. We talked about Charlie's preference to use words to communicate, but his tendency to use words to mean more than one thing, and to mean things other than might be obvious. For instance. Friday night Jim and Charlie picked me up around 6pm at my job in Jersey City. We thought we'd go to a certain diner, but Charlie said an adamant "no" in the parking lot. We drove towards home, with him saying over and over "I want eat, I want to eat." We proffered various choices, all of which Charlie turned down. Jim and I told Charlie that we were getting a pizza (it's been a long week). "No pizza pie," said Charlie. We suggested an old, old favorite, guacamole and Mexican food. "Yes, guacamole," said Charlie. And then, "no guacamole. No." We stopped at home and I put away my computer and two bags of books, and went to get the pizza. It wasn't ready yet, as I informed Jim and Charlie, who had walked down the street to use the ATM at a nearby bank. "Let's go to Qdoba and just show Charlie the green stuff and see if he wants it maybe," I suggested. There was a time that we used to be regulars there; Charlie, still gluten-free, liked his "naked" burrito and a side of guacamole. Tonight the place was crawling, outside and in, with younger teenagers and families with little kids. We directed Charlie to stand in line and he watched intently as a vegetarian burrito (hold the cheese and sour cream, lots of guacamole) was made for him. "I want," said Charlie, eyeing a basket of brownies: One of the workers smiled and held up the basket for him, and he took one, and carried it tightly in his left hand all the way back to the car. Jim got the pizza, and we headed home, where I think Charlie polished off his burrito before I'd even gotten my first piece of pizza. A little indirection; a little silence; a little letting be and seeing what results Not all communication (certainly not all of Charlie's) comes in words.

A little indirection; a little silence; a little letting be and seeing what results

Not all communication (certainly not all of Charlie's) comes in words.

But of course that takes a bit more time (in the beginning), and individualizing your response to each person, and not just using a stock response.

My fingers are crossed for the new school...I'm glad that you were able to take pictures!

I know I'm not all that bright, but I do think a lot...give me that!!! (I try to make up in quantity what I lack in quality, for sure!)

Has Charlie ever had seizures? I used to swear Ben had "mini-seizures", a sort of disconnect in nerve impulses...a constant "what am I doing in the kitchen?" type impulse.

I know you are checked in to Charlies neurologists, but when you talked about "neurological storms" I couldn't help but think of seizures today. It's just my curiosity getting the best of me.

Writing a kind of Charlie dictionary to give to the teachers is a great idea, I hope they make good use of it.

Good on the worker who held up the brownies!

This is slightly irrelevent but I can't seem to stop myself from talking about Dimitri:-)Yesterday and today I've had Dimitri going back and forth to the fridge to ask for some cream cake thats in there (he likes mostly foods that are white) but when I put some on a plate he only eats a small amount. He knows it's there, he knows he likes it and he knows it's not a regular item - which is I guess why he asks but then finds he is not that hungry after all.

@Emma, You know, Charlie does something similar, asking for food repeatedly and then just having a small amount. He used to have a hard time leaving any food on his plate and would force himself to finish things and then (we suspect) feel sick, and it's been a good thing that he can see he's not hungry (even when there is good).

@Rose, Charlie is not having seizures according to his EEG. But his neurologist seems to feel that something is going on---any more you might note about Ben's "mini seizures"/disconnect moments, spells? would be very helpful! I've also read about "pseudo-seizures." We made sure to tell the director that the neurologist has also noted encephelopathy and sleep disturbance disorder as among Charlie's diagnoses.

I wish Charlie much happiness in his new school. FYI, my Mooser wants to have food, but not necessarily eat it. It took me a long time to realize my once failure to thrive kiddo thinks about food in more than a "satiate his hunger" sort of way (some times it has to do with pleasing other senses, or security, or routine and order, etc)...lots of uneaten food some days, but it brings happiness to him somehow.

@ange, am so glad you mentioned that about food. i do think it has those sorts of meanings, purposes for Charlie, that it's not just for eating. he keeps wanting to make brownies (added the water and got out the oil and added that after I measure it today). he loves to lick the bowl but that's not even the only reason----something about making them seems very gratifying to Charlie.

(And brownies mix was on sale for 88 cents at the store today.)

Thanks for not thinking me nuts. I know nothing about them, medically...Ben has had EKG at 3 years and 8 years, and nothing shows up. It's just that I observed his brain "short-circuiting" once years ago...and it made me think he had an epilepsy, that was either sub-clinical, or perhaps chemical or of another type that wouldn't show up in an ekg. I'll try to write a blog about it within the next week, to see if anyone else has noticed something silimar in themselves or their children.

Epileptic seizures can often be brought on by stress, from what I was told when I worked with some old women in an institution long ago.

Thanks for your interest. God bless y'all this week!

I mean EEG---old age and brain f*rts...I tend to get the two confused anyhow and have to think it through to get them right. Too much work these days...