Don't Let It Get You Down 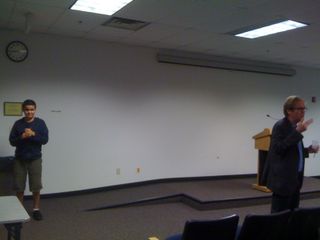 I was going to write a post about the helmet. We're now dropping Charlie off to school in the morning and picking him up; if he rode the schoolbus, the school district insists that he wear the helmet. The helmet now resides strictly at the public middle school in our town. In the morning, Charlie's teacher and an aide walk down the hall with it and meet Charlie at the four metal doors. In the afternoon, Charlie is usually sitting in the office (leaning over, head down) and his teacher or aide remove it. The whole thing makes me feel [UNDERSTATEMENT OF THE YEAR] incredibly aggravated. Because when you get down to it, the helmet is being strapped on my kid's head not because some psychology professor/behaviorist/ABA consultant says so but, ultimately (not that anyone would ever say it) because the district's lawyers say so. So much for education in this school district.

But enough of bile, black or yellow.

Yes, it's what I'm supposed to feel, moral outrage, maternal anger, a full dose of spleen at the heinousness of it all. When I feel such strong emotions, Charlie always, always picks up on them. And that's not the sort of peaceful easy-feeling parenthoodness, of acceptance and hopefulness, that I'd like to teach Charlie.

Charlie's been clamoring to hear a CD of Louis Jordan and His Tympany Five in the car (he indeed seems to have relinquished his iPod, stocked with Coldplay, U2, Jimi Hendrix, the Ramones). It's been boogie-woogie to that 8-beat rhythm in the black car and I'd snap my fingers if I could (I can't snap my fingers) (really, I can't! I keep trying). Louis Jordan is highly danceable stuff and (as Charlie wants to hear the CD on the way to school), I've found myself doing a little two-step and sway as I walk with him to the door. I nod hi to the Assistant Vice-Principal and the policeman and wave my boy good-bye. 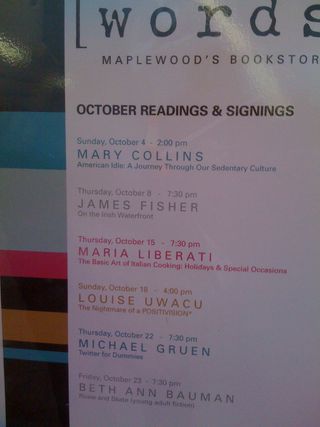 If this all sounds ludicrous and, I don't know, goofy---what is with this woman, she's the one with the huge kid with the plastic helmet with the face mask and straps---I suppose one could see it that way and could see our life with Charlie as having become some sorry mess. But really, and I can't say it enough, the messy part of life with Charlie has been pretty much confined to these days to the beige and brown one-story structure that is the public middle school in our town.

The rest of the time:

I have been pausing to feel sad about Ngin Ngin passing for sure, grinning at so many good memories and finding myself lucky to be able to call her my grandmother.

We have been celebrating Jim's book On the Irish Waterfront: The Crusader, the Movie, and the Soul of the Port of New York. Last night he spoke at a local library. (And tonight he's speaking at Words bookstore in Maplewood.) Charlie and I dropped him and some twenty books off. We sat in the car in the parking lot for awhile (yeah, what a glamorous life we lead) and then Charlie said "yes" to going in. I found a door to the room (actually in the community center) where we could hear Jim (Charlie was all grins) only it wasn't the main door, but one that opened directly to the front of the room, so that Charlie and I walked in right behind Jim speaking about containerization. We were introduced and then Charlie wanted to go out, so we walked around the community center, watched a boy Charlie's age playing what was maybe an Xbox (I wouldn't know) and then wound up back in the room where Jim was now signing books.

I chatted with some friends and was happy to be introduced as the so-to-speak missus. A man heading out the door told me his son was "like Charlie" and talked about how the town's schools had provided him with what he needed. A woman said she was an occupational therapist for children in Early Intervention; she commented on how well Charlie was handling all the voices, noise, new people.

Yes, things are all right and we drove home ebullient, and listening to guess who.

I'll be dancing. I will.

The glamorous life is over-rated - I'd go for dancing down the street any day:-)

First off, after you had posted about Louis Jordan the other day, I asked my audiophile hubby if he had any of his work and he of course did. We played it to see if Casey would like it, but the computer was dominating his time at that point. I can say Bill and I boogied around the house to the whole cd, great taste on Charlies's part, and we are definitely going to revisiting when Casey has his listening ears on.
I just love how you keep emphasizing the peaceful easy feeling theme throughout your posts. It really does make all the difference, I've been really trying to use it myself at home.
I'm so sorry to hear about the loss of your dear grandmother, you were lucky to have her here so long!
Love the picture, looks like Dad just carried on with his lecture! That's life, just gotta carry on!

They really are turkeys, too. If I could go in there and smack them for you, I would.

Ya know, there's got to be some association with that iPod and school that you're not aware of yet. That still intrigues me. I'm obsessed with it. ;)

BTW I want to get one of your husband's books for my husband for Xmas... any chance of getting it signed?

By and large, being happy is a choice. I applaud you for choosing to see all your blessings despite the ridiculous hurdles the district keeps placing before you. I believe that we only live once, so we might as well enjoy it as best we can! Blessings, Kristina! xoxo

Charlie started listening to Coldplay because his classroom had a CD and there was a LOT of Coldplay on his iPod. And he used to iPod a lot in class last year----I do think there's an association.....

Charlie is coming into his own, and dang those school folks just don't seem to get it. So neat to watch him and his family grow right before our eyes. :)

Turkeys all over and it's not even Thanksgiving yet!

Charlie is growing up with these latest changes, and not only in the height department.....

Charlie pays attention to mood, and that makes sense. Mood is, after all, what really determines whether an experience will be good, bad or indifferent. As the Buddhists say, pain is mandatory, suffering is optional. I applaud your choice in paying attention to the things that lift your mood, rather than the things that would lower it. There was a book about that recently called "Rapt." After reading it, I didn't think it really warranted a whole book, but the key idea, that we have choice about what we pay attention to, is a keeper.

S refused to wear her watch the last few days. I found out that her gym teacher threatened to take it away. Now she won't wear her watch.

@J, now I'm wondering what else was said about the iPod...I think if/when Charlie gets a new one, it will stay at home. (Unless of course he wants to bring it to school or elsewhere.)

@VAB, I have been thinking, why lower myself to their level----why be glum when really, life _is_ good.

And thanks to Charlie I pulled out some more blues CDs and listened to them as I drove to work.

How to retain one's sense of peace in the face of real battles over our children's lives, present and future, that is the question.

You are so right that they tune-in completely to our affect, breathe it in without even knowing what hit them, so it's so critical to stay calm and upbeat. But how to do that -- that is the work, to be sure.

So Charlie is back at the same school? Did they move him to a more restrictive setting? I have been reading your blog since early this year and waiting to see where you would place your son. I'm sorry that you have been having such a difficult time with your school system.

thank you---Charlie has been at the same school all along. it's gotten much more restrictive with the helmet; in general, the program is very "tight" and I think this has become a problem for Charlie. I anticipate his transition to a new school being rough. He often seems ok with something new at first, and then things become more difficult. At this time, he really needs something different........I don't have the highest expectations for the new placement, but hopefully we can be as involved as possible and make it work.