Icing Off the Cake 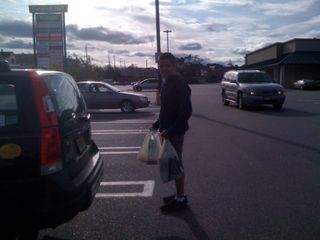 Monday I had (not too serious) modem trouble; we also had (kind of extra serious) car trouble. Jim and I both had the day off from teaching as it was Indigenous Peoples Day/Columbus Day (I really did grow up right in the vicinity of Berkeley, CA, and was far more likely to hear about the former). Our New Jersey school district seems to be one of the few for whom the day (whatever it is called) is not a holiday. So while Charlie was at school and Jim was hearing the bad news about the black car, I gave our apartment a very thorough cleaning and sorted through piles of puzzles and bins of flashcards and plastic stimuli in Charlie's room.

I hadn't really gone through much of these since we moved into the apartment back in September of 2007. I shuffled through a dusty bin of alphabet flashcards and old Ziplocs filled with plastic colored cubes and stubby crayons from the days when we tried to get Charlie to color. I made a huge tower of Ravensburger puzzles: Up until he was about 9, Charlie was always drawn to puzzles and relatives and friends generously sent us lots. (Anyone need some puzzles, 60 pieces, 100 pieces, very gently--if that---used? I'm planning a giveaway.) "Receptive by feature function and class," "skip counting,"  the "reading/writing board," "block design": The names of one program after another came into my mind. I stacked up several binders crammed with datasheets. I found a folder with a song that Charlie's old piano teacher had given us at his last lesson a couple of years ago, and that Charlie has yet to play.

Books appeared under the puzzle boxes or wedged behind a shelf. Tar Beach, Harold and His Purple Crayon, Richard Scarry's Best Word Book Ever, My Very First Mother Goose, The Giant Ball of String, each read to Charlie countless times as he bounced in his chair and tried to identify the letters we pointed to. I stacked these up and placed them altogether in one spot. I've given a few board and picture books to my cousin whose daughter will be a year old this winter. Though Charlie has yet to read any book---has yet to read a phrase, much less a sentence---each book comes with lots of memories of our efforts trying to teach him; comes with the traces still of the magic allure books have always held for me. (When I was a child, my parents told my sister and me, we could always get books; toys, though, were limited to special occasions.)

Charlie has not "mastered" many of the things we and his many teachers and therapists over the past ten years set out to teach him. He's tried very hard and we all have, too. But some things just take him really really long to learn (I remain a person who has a really really hard time giving up.)

While yesterday I really wondered (and still am) about how much "progress" has occurred in understanding autism and autistic individuals, I regularly chart the small sparks of learning and growth in Charlie. Yesterday this was measured in.........frosting.

After spending the better part of the day dealing with the car issue, Jim went to his office to grade student essays. Charlie and I stopped at the grocery store. In the past, going grocery shopping meant we had to get certain items, meant getting two jars of relish even if we already had three at home. Over the past year, we've more and more been able to explain to Charlie that (as was the case yesterday) we don't need to get more watermelon as we have some at home in the fridge; that we don't always have to get exactly the same items at the store. Charlie wanted to get brownie mix and paused when I reminded him about the pan of brownies sitting on the counter at home. "White," he said and looked wistfully at the containers of premade frosting.

I said "no we don't need that" a couple of times. Then I said "we can get it if you have just a little and we save most of it."

Some frosting was indeed all that Charlie licked up with a spoon as I portioned out the rest into several little plastic containers. In fact, he left a good dollop untouched and I was reminded of forbidden fruit syndrome: The secret to making something less desirable is by saying "ok fine, just eat it."

Sure Charlie never "mastered" all those programs in the stack of binders. But there's many an unwritten program that he has indeed gotten. Success (especially when you didn't realize it'd been attained) can be so very, very sweet.

My wife is "really really hard time giving up" in another way. Today, I went through some old toys and decided to throw them in the garbage. My wife found out and had me taking them out to clean them. She told me the history behind each toys and the times she spent teaching our sons how to play with them. I did not understand at the time the important of these worn out toys but now understood more of her feeling for them (I guess?). I am glad to hear of positive changes and new growths in Charlie. Life is full of "unwritten programs" that can only be learned with loves and patience. Charlie had to deal with many obstacles in school, but he is loved and learning so much in an easy feeling home environment. We cannot force kids to learn, but we can always inspire them.

Learning through living:-) the unwritten programs often turn out to be the best (and most useful). I also think with the binders and the games that progress is made, but it may not show straight away.

I like what Hai Dang says - "we cannot force kids to learn, but we can always inspire them" - so true.

Mine mastered hotdogs and hamburgers on a bun this summer.

And... this weekend had a little bit of ketchup on the hotdog.

With Emma, seconding what Hai Dang wrote! I am starting to think I have a harder time letting go of some of Charlie's things than he does.

Charlie eats hot dogs in buns, burgers though he takes apart---a long time holdover from the years he was gluten free and ate no buns. No ketchup on the hotdogs though---

1) Oh we heart puzzles and will pay for shipping.

2) Good on you for recognizing the dangers of Forbidden Fruit syndrome (writes she who still wrestles with urges to purchase sugary cereals for that reason).

3) I love reading about Charlie being happy when his desires & communication skills + your being in tune with him = success for you both.

Every year the Autism Society of CT hosts a Puzzlethon fundraiser. Rather than doing a walk a thon, we do puzzles. We are always seeking donations of puzzles. Contact us at asconn@sbcglobal.net if you are interested in sending us any.

Fabulous regarding the puzzles---will be in touch----

I was thinking of Charlie on Saturday, when my darling daughter Jumper Girl was fully suited up, including a helmet with faceguard, for her black-belt test. It is somewhat similar in appearance to the image you posted of Charlie's helmet. I put on the helmet for a little while. It made me wonder if perhaps the helmet itself induces mal-adaptive behavior. JG's helmet was hot and somewhat claustrophobic -- it reduced my peripheral vision. JG's helmet has perforations around the ears, but it made it difficult to hear where sounds were coming from. Now I'm pretty used to helmets -- I wear one when I ride horses and when I ski -- but this was different.

I am quite sure it does.

And whenever i bring this up to teachers, therapists, the director at the autism center today---I get a blank look. (I'm not kidding.)

Tar Beach and Richard Scarry are both around the house here, somewhere. Sweet Pea has a Cassie Doll that she still likes.

Good luck with the intake.