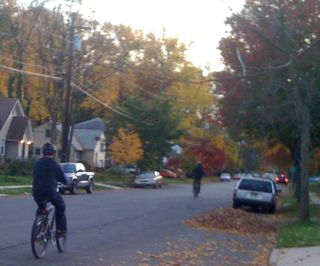 "It's a mystery" was what Jim said Sunday morning in answer to the EMT who had just taken Charlie's blood pressure, after Charlie had gotten very, very upset at the bagel store. Jim said this as he and I were trying to explain why we thought a major neurological storm had befallen Charlie. We talked of seizure activity, of the imminent change in Charlie's school placement (Charlie's been talking about the kids in previous classrooms and teachers from long ago all weekend). And we owned up to saying, yeah, we often just don't know what happens with Charlie.

Monday Charlie woke at 2.30am and went back to sleep with Jim soothing him. I roused Charlie gently around 7.30am. Jim had run to catch a train to teach a morning class. I set out Charlie's clothes and told him I'd load my things in the car. Then I heard knocks, thumps, cries. Stomps. It wasn't good. What helped to end it was when Charlie came out of our apartment, still crying and so, so, agitated, and I directed him to the field across our parking lot. Once he got to the edge, he ran down the little slope and kept going, full steam ahead, till he came up the slope on the other side and the trees. He turned around then and looked at me and ran back more slowly. When Charlie gets so very upset as he did in the bagel store---and we were in the cramped part in the back between the bathroom and the "to go" counter---all we can think to do is to get him out as fast as we might. And now that my boy is as big as the doctor who delivered him once predicted he'd be (due to his big baby feet)----Charlie's gaze is eye to eye with the top row of the grocery store shelves; I've spent a lifetime clambering onto the bottom shelf to try and grab some desired item on that top shelf, can't believe my own boy is that tall---now an upset Charlie means, we need to get Charlie to a big wide open space (preferable grassy or sandy; parking lots with concrete will not do) as fast as possible, and let him run, let him flail and stretch out his body as much as whatever's going haywire in his head requires until he's peaceable again.Monday morning after his run Charlie got quietly into our car after changing his socks, wet from the grass. He smiled hesitantly as I drove and looked at the trees gone yellow, orange, and red. A detour due to roadwork only led to him looking around more. His eyes got big as I pulled up to the circular driveway in front of his middle school. Yes, Charlie still thinks he needs to be there, regardless of everything. It's the school he's known for over a year, in the town that Charlie has lived in for three years. In the school district that is in effect expelling him, and (we quite suspect) forever. Jim and I can't say for sure, but we're quite certain Charlie knows this. And I think, too, how all this came about, is at least a little baffling, a little mysterious to him, and therefore the source of consternation and confusion that makes you just want to run. "It's a mystery" in the sense of something that can't quite fully be grasped, no matter how much you put your mind around it. (And I don't mean to draw on the notion of "autism as a puzzle (piece)" that one regularly hears about. Certainly there is much about Charlie and why he does what he does that we don't grasp; certainly there is much about Jim and me that I sure he finds at least a bit perplexing.) (Ah, the perils of parenting.)

The rest of Monday was stopping at the post office, grocery shopping along with half the population of our town (guess everyone wanted to start the week with a full pantry), a bike ride with Jim that ended just as the sun was setting. Charlie helped himself to some (lactose-free) ice cream and then told me "give, Mom," when he'd had enough (the ice cream was still quite frozen and hard). He slumped over with his head on his hand and I brought over his old yellow blanket, which Charlie wrapped around himself. I was cleaning up the kitchen and, on glancing Charlie's way at one point, found him looking up towards me (full eye contact; I didn't do anything to ask for it) for a good two minutes, and peaceful and relieved he was. He asked to go to bed before too long and was sound asleep, without any melatonin.

I think we'll be visiting the field, and some other ones, very soon.

"we often just don't know what happens with Charlie"

Well, you can't say 100% it's this or that, but, a bit like Sherlock Holmes you put the clues together and make very good deductions!

(lovely photo with the colours of the trees and Charlie out on the big, open road)

Our new asd teacher and behaviorist recently put forward the idea of panic attacks as the source of the intense and sudden "problem behaviors" that we see, that often disappear as quickly as they come. It's an interesting way to look at the situation, though of course it's just another mystery without a clear-cut pharmacological or therapeutic solution. But to me, it offers a different perspective on what's happening, and how it must feel. And exercise, the chance to give our bodies the ability to run out the adrenaline, to flee instead of fight, is perhaps a solution of sorts. Bless the big grassy field.

ahh Kristina- looking right into your eyes. He loves you so much- what a boy!!

i can't love him enough!

Panic attacks seem a viable explanation for Charlie, thanks for noting that--hope the new staff can think about such things for Charlie too.

My Sherlock Holmes sleuthing is giving me a headache today! So it goes.....it's raining too so am I glad I took some photos of yesterday's sun!