It's Not His Fault 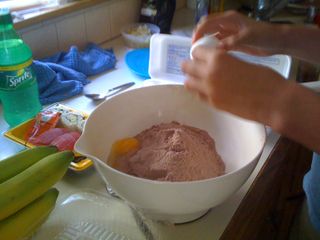 Yesterday I started talking to Charlie about how he will be going to a new school. He looked at me, blinking a bit. "It's not your fault," I said. My mind ran over the numerous procedural and other errors---some noted in my letter to the Superintendent---that got things to this point. So much, too much.

A few minutes later, I heard the sounds that mean, Charlie's telling us he's upset, confused, sad, puzzled that the pieces of the world as he knows it aren't fitting together so much that it would make anyone's head hurt. I ran to him and stood across from him. Keeping my words minimal and my voice low and loving, I talked about how feeling, well, upset, confused, sad, puzzled is just as he should be feeling. About how we know Charlie did his best in school, tried his hardest. About how much we love him and we're always with him. About how we'll try everything we can to make the new school ok.

Charlie stood straight and tall where he was and cried.

Behind Jim and me doing all that we could to make Charlie's current placement work is our memories of how traumatized Charlie was four years ago when things were falling apart in his public school classroom in another town in New Jersey. We took him out of school then and homeschooled him and, after a few days, he knew this isn't right, I should be in school!, and was very, very upset. Fortunately we were able to find a (private) placement for him in just a few weeks and Charlie became vigilant about being in school, to the point of seeming distressed about vacations and weekends.

Jim and I wondered, did he think he was being punished in November of 2005, that he couldn't go back to school? And is Charlie thinking this now in October of 2009---that his having to leave his current school and go somewhere else is all his fault?

Sunday, once Charlie's crying had become suppressed sniffles, we got into the car and got some groceries (with an eye to what to put in his lunchbox: in the midst of troubles, one must still eat). Charlie dug through some boxes to find one particular brand of brownie mix and asked me to make them soon as we got home. He microwaved himself a plate of fries while the brownies were baking. 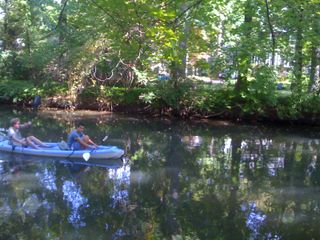 Jim had been talking about kayaking and, soon as Charlie had put his plate in the sink and washed his hands, he asked to put on his swimsuit. Jim loaded up the kayak, I got the paddles and seats, and Charlie moved the bikes out of the way. We drove to a local (not too deep) river and Jim launched the kayak while Charlie took off his black shoes and squished his socks inside them. He got himself into the kayak by sitting down on his derrière and shimmying to the edge of a stone wall until both his feet were in the kayak. Jim waved and Charlie kept his eyes on the water.

I skipped down the bank behind some trees to watch them from a point up the river and all the way I could hear Jim singing a phrase from "We Love You Charlie" and the theme song of The Courtship of Eddie's Father.

They kayaked up and down the river, which was only a few inches deep at one point. They came eye to eye with a deer. Jim talked to some other kayakers who told him that they could paddle all the way up to a certain state road (one of those New Jersey highways with only a divider inbetween four lanes of fast-moving traffic and every possible chain store represented at some point or other). The sun shone warm and bright and for the rest of the day we assured Charlie that he's doing good, and that things in the near future will be different, but still all right.

And, that it's all not his fault.

It's heart wrenching to think that Charlie blames himself and punishes himself for these changes in school. Would it be possible to explain things as moving on to something better? A new start as he is growing older?

Sounds like the rest of Sunday was a good day, cooking and kayaking:-) Hope you get more days like that (I would like to try the kayaking myself, it sounds relaxing). Charlie is getting good at breaking the eggs!

Looking back the toughest part of our family's recent move, for the wife and I, was dealing with the uncertainty. Not knowing exactly when we were moving, had to sell the old house, where we were moving to, couldn't buy the new house till firm sale offer was in place for the old house, or what the school arrangements were, we knew where we wanted to move to but dared not commit to G till we had a house since we didn't even know how much cash we'd have. The younger kids were OK, it wasn't real until it was in action. But for G we'd been preparing him for months because we knew it was going to take months of work to get him on the plane. When we started he couldn't bare to be in a hanger with a plane for an extended period of time, or watch one take off/land, without being overwhelmed with anxiety.

Not having details and a firm plan to give comfort to G, and to some extent his older brother B, was gut wretching. Completely gut wretching.

In the end though it all sorted itself out. These things tend to. People that keep focus on what's really important always find some way to address what's really at the top of the priority list.

Like brownies and an afternoon floating on the water. :)

Ditto, ditto, ditto, ... it is certainly not your fault and we know that you worked your best and your hardest, Charlie!! We love you, and are here for you too! And we'll try everything we can, together, to build a future where things will be better ... much, much better!!!

"Charlie stood straight and tall where he was and cried." This completely undid me.

I'm glad the routine activities of shopping, baking, kayaking wee a bit of a balm. For all of you. I know how gut-wrenching this whole situation must feel. I hope, like Dwight wrote, things will work out in the end.

And I hope that this new school will give Charlie a place where he can not only be safe but where he can blossom.

Beautiful post, and nope, it never is their fault... never.

Oh, Kristina, I have soooo been there. I used to worry about how programs or ignorant teachers may have traumatized Nat by their incompetence -- in the end I have to let it go and believe that he is okay, just like you or I would be okay after a while. What I'm trying to say is, you love him so much, that is so clear, and you are so careful, and respectful with everyone else -- it will be okay.

To this day my youngest is suspicious of new teachers/therapists, all b/c of the ABA one's. The SLP we'd hired after about a month did ABA and all he did was get up and leave and I let him. She never did it again, they worked or they played, they never mixed them.

All we can do is move forward, and fix things the best we can.

I'll tell you when the parental guilt over that ends too....

that is so beautiful, kristina! i love this family outing, the love, the spontaneity, the song that jim sang as they paddled (!). and yes. it's not his fault.

Poor boy. What an awful feeling. Thank goodness he's got you and Jim to understand him and these feelings and help him through them. Lord no, it's not his fault.

This kayaking stuff sounds like fun. If it weren't a zillion degrees here in the summer, we'd get into that, I think.

Another tear inducing post - this too shall pass. Somehow. I remember how bad my son's tears at school changes felt.

I'm not sure if it helps, but I think it might be as much anxiety as guilt. Transitions are really, really, really hard in our house. Leaving schools, even when it was clear that he was frustrated every day caused a lot of anxiety. This past summer my son attended a camp that was close to the last school he attended. As we drove up the familiar roads you could see the anxiety. Was he being sent back to the old school? Was he being pulled out of his current school? We talked about it and he did a fair amount of processing. For us processing is signaled by echolalic speech - in this case repeating what had been said when he was pulled out of the school about 9 mo previously, what had been said when he was put into that school ~ 3 yr previously, what had been said about summer break...you get the picture.

Just a thought. I'm not sure that anxiety is any more pleasant than guilt (for Charlie or vicariously for you).To me, it seems less sad to look at it that way.

I felt so sad for Charlie! He's a good kid.

I hope he does well on his new placement.

I share Carlie's sadness. It is sad when something does not work out after trying very hard. It is so wonderful that you were able to turn around the mood with a lovely outing. Endings are also beginnings and bring with them great opportunity. Let's hope the transition is smooth so that Charlie can soon be enjoying the benefits of the new opportunities.

I've been thinking a lot about this ending as just that, a beginning.

And trying to do a better job at keeping my mouth shut when I pick him up after school----today, after hearing that "he didn't want to work at all this afternoon," I had to say "he knows he's on the way out, it's not easy."

@a parent, you wrote that "processing is signalled by echolalic speech"---same happens with Charlie, sort of as if he is repeating mantras to soothe himself.

@Emma, I was impressed with him breaking the eggs---he must be watching me as he cracked them on the side of the bowl. He did put the shells in too until I told him to put them in the garbage......... Charlie's still an occasional paddler in the kayak and it's mostly Jim doing the work (and enjoying it!). I've tried very hard to speak in positive terms about the new placement. Charlie knows a few children who are there and who may well be in his class and I found out that the OT who left his school district this spring is now working at this center.

I'm really hoping that this placement works out well- that he gets a good teacher, classroom, team, etc. It's a lot to expect a child under this type of stress to do any work!

I just want him to get through his days in one piece----talk about a learning environment non-conducive to learning, sigh.

That could be really helpful having an OT he is familiar with in the new placement, it may help provide some idea of continuity, as will familiar children.

I am hoping she will be able to work with him. I think she had a very large (overly large) caseload in our school district)---hope this has been a good move for her.

I was surprised Charlie seems to be getting egg cracking pretty quickly. I only showed him once---I think he saw me doing it and followed suit!