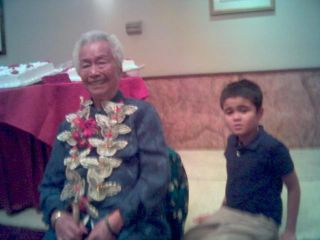 Ngin Ngin, my grandmother, died early yesterday morning, October 6. She was 103 years old and would have celebrated another birthday towards the end of this month. She was a master cook; my childhood is steeped in memories--tastes and smells--- of the several-course meals she cooked up in her kitchen in the house on Madison Street, and also of the many bowls of (bitter, herbal) "strengthening soup" that we had to down. She sewed clothes (for us, for the department stores) and aprons and everything (including parachutes in a factory in the Korean War). She knitted itchy, bulky, lumpy sweaters that definitely kept you warm, if a little uncomfortable.

Ngin Ngin herself was born in Hong Mi, a village in southern China, and (via a matchmaker) married my grandfather before he left for America in the early 1920s. She was detained on Angel Island on her way into the US and (from reading the documents in her immigration file) "a little something" was slipped under the table to get her off the island. She and Yeh Yeh had five children, my dad being the fourth (and the first son). She was a working mother before anyone thought of that term.

Ngin Ngin did not read or write, either in Cantonese or English. As a girl in pre-Communist China, she wasn't taught to. In the US, she lived most of her life in Oakland's Chinatown and did very fine without English. She spoke only Cantonese and I have never had an actual conversation with her. (Jim though, now a long-time member at many a family dinner around a Lazy Susan weighed down with plates and bowls of Chinese food, is of the opinion that Ngin Ngin knew full well what was being said around her, and that, however much we said we don't know Cantonese (I don't), my cousins and I seemed to do perfectly fine communicating with Ngin Ngin.)

And though I never was able to tell Ngin Ngin what it was like living "back East" or what I thought about visiting Hong Mi and Hong Kong and southern China with her in December of 1993, I did feel we were able to communicate the essentials. I "said" what I had to say by sitting and watching Chinese soap operas with her on my visits home; when I was in graduate school in Connecticut, she gave my parents a Merritt's ice cream container filled with soup made with a really really special fungus and insisted that they bring it to me. My dad carried the soup onto the airplane in his carry-on luggage and, when he and my mom missed their connecting flight, he made sure to stick the soup in a hotel room refrigerator. "Not bad," I said when they finally got to my apartment in Connecticut and I had drunk some soup, freshly reheated in my microwave. Watching me try to pick up one of the fungus things with my chopsticks, my dad said "Ngin Ngin loves you."

I studied "the wrong kind of Chinese"---Mandarin---in college and, whenever Ngin Ngin and I attempted to speak the Chinese we knew to each other, we couldn't understand each other's words. When Charlie was born, high on my list of What I Want My Child To Do Fantasies was "learn Cantonese together." That plan fell by the wayside as we realized the extent of Charlie's speech and communication disabilities. My Mandarin is really, really rusty now but knowing that much in Chinese is communicated via tones and the pitch of one's voice has, on more than one occasion, helped me to understand Charlie's vocalizations: Charlie (more when he was younger) often leaves off the initial and final consonants of a word, so all that one hears is (not exactly precise) vowel sounds and, often, a certain pitch and tone rising or falling or looping around. Years of listening to Ngin Ngin and my dad and mom and aunts and uncles talk, and of non-verbal exchanges with Ngin Ngin, have been an unexpected background in being able to understand Charlie

Ngin Ngin turned 100 in October of 2005 and Jim, Charlie and I were able to attend her big bash bonanza of a 100th birthday party (and Charlie in the photo above has an appropriate look for someone finding himself sitting next to a great-grandmother, Tai Po, who is almost a century older than him). I'm suspecting that Charlie also sensed many things I've long known about Ngin Ngin. She was tough, she could be stubborn and demanding. She had a fierce and thorough love for her children and grandchildren and great-grandchildren (Charlie is one of seven) and those connected to her. She cooked and sewed until she just couldn't any longer. (She lost her sense of taste when she was in her 90s and, while everything she cooked looked good, it all had the same blandness.) She loved to stay up all night playing mah jong and to take the bus to Reno where unsuspecting dealers figured she was a little old Chinese lady who didn't know any English; she walked away with winnings in her battered self-made purse and gave them away to all of us in hong baos. She refused to leave the house on Madison Street and so, as the foundation had to be rebuilt to make it earthquake proof, my dad and his siblings arranged to have the house secured on I-beams while a new foundation was put in.

Ngin Ning's house was declared a historic landmark as it had survived the 1906 earthquake. Ngin Ngin herself lived through more than few earthquakes and hard hard times, and---like the time she poured hot water on the (pardon the expression) bum who kept ringing their doorbell in West Oakland when my father was a baby---she was tough and took care of her own. When she passed, she was most certainly not alone. She was in her own home and her family---my parents, her children, grandchildren---were with her.

And to thank her for making all that soup, for all that strength.

much love, healing, and remembering on your trip to say goodbye to Tai Po

What a wonderful tribute to your grandmother, she must have seen and lived through so much. I can hear the noise from the mah jong (there were weekly mah yong nights were I used to work).

I will be thinking of you all today.

Thank you for writing this, Dr. Chew - for sharing Ngin Ngin's life and witness with all who read this touching reflection. May God rest her strong and loving soul.

God bless her dear old soul.
What a wonderful life Ngin Ngin had, surrounded by her family. What joy she obviously brought to all those around her.

I am sure she is up there watching over you all... probably cooking up a storm too :)

I climb the western tower in silence, the moon like a sickle.
Clear autumn is locked in the deep courtyard, where a wutong tree stands lonely.
Sorrowful parting has cut, but not severed our ties; my mind is still wild.
Separation is just like a taste in head and heart."

What a wonderful tribute to your Grandmother! My condolances to your family.

That was a very interesting post she sounds quite an individual.

No-one amongst my immediate forebears or cousinage, has so far lived beyond 99 years and ten days of age, which was my great Aunt who died last year, since when I have lost two more Aunts and an Uncle, so the connection with the past is pretty much severed in my line.

Our condolences to you and your family on your great loss.

My condolences to you and your family.

My condolences. Thank you for sharing Ngin Ngin's life story (which is your story, too). What a powerful force leaving this earth. And Charlie understands so much ...

One can only imagine what Ngin Ngin has been through in over a century... Thanks for sharing her story. And I know how the language barrier doesn't mean a grandparent can't love and relate to grandchildren. They'll find ways to express and send their love, such as the soup...

I'm sorry for you loss, Kristina. She sounds like a wonderful woman.

The "strengthening soup" explains a lot about you Kristina! Rest in peace Ngin Ngin. 104 years...

Very moving post! Our thoughts are with you and your family during this difficult time.

thank you to everyone---I can still hear her voice and my dad responding while reading her mail and me asking him, "what'd she say?"

@Kathy, yes, I think, wherever she is, she is already whacking her cleaver into some squid and bok choy and boiling some chicken bones and herbs for soup........

She had no health care growing up in rural China. And no formal education.

One of my aunts did her best to write down her recipes and her memories: I've been thinking about her life spanned most of the 20th century.

Cheers to a strong woman and a life well-lived. It always amazes me the responisibility the "elders" have for so many lives in the world, and the meaning their lives give to their progeny.

Have a safe trip to California.

Love this!!! So beautifully written -- I can practically sense her fierce love and toughness, and smell that strong herbal soup a-brewin'.

How sorry I am to hear this, Kristina. But thank you for your wonderful post - it is always so heartwarming to hear about those who have remarkable lives. Hopefully hers will give you comfort in the future. {{{K}}}

Kristina, your Ngin Ngin sounds like a remarkable woman. And an amazing life: from the years of the last emperor, into the 21st century. I think she will be making strengthening-soup in many people's minds -- and the ongoing memory of those who knew her and those who learn about her is the manifestation of heaven that is most tangible to us, the living. (Sartre saw the half-full glass half-empty, alas: heaven manifests itself in other people as surely as hell does.)
May her memory be a blessing.

Thinking of you and yours at this time of loss and celebration of such a long and well-lived life. My condolences and wishes for safe travels and speedy return.

I think I am going to have to learn to make some strengthening soup myself.......thank you, friends.

and a whole lot more.

I just got home late last night from China. I couldn't read any blogs while I was there, so am just getting caught up. Sorry to read of the loss of your grandmother. She sounds like a great lady.

Kristina dear, I missed this post. My condolences to you and your family.

My own grandmother was born in 1886 (in California) and died in 1978. Her life encompassed indoor toilets, the telephone, paved roads, the automobile, air travel..and two world wars. In the first she lost a brother in the second two sons-in-law. And the end of many high-mortality diseases. I never understood until I was a parent why she cried when she went with us to the mass polio-vaccine handout.

In honor of Ngin Ngin, shall we all learn to make strengthening soup?