Once Upon A Very Unwild, Rainy, & Happy Saturday 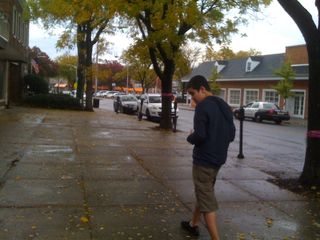 Jim and I thought taking Charlie to see Where the Wild Things Are would be a good thing to do on a very, very rainy Saturday. We all slept in after a somewhat sleepless Thursday night. Charlie took awhile to wake up (and to transition out of sleeping mode), then got out the bikes while Jim made a post office run. The rain started falling again while Charlie and I were on the lookout for Jim but the clouds parted, the sun glimmered, and Charlie and Jim biked off. It did start to rain again on their ride home, but the bagel they brought me was still nice and dry. I've been thinking of taking Charlie to see Where the Wild Things Are since hearing about the movie earlier this year. The last movie he and I saw was Kung Fu Panda in June of 2008. Charlie generally seems to follow movies and videos with live action and actors better than animated cartoons, and I felt hopeful that Where the Wild Things Are might appeal to him. But as I parked the car this afternoon, Charlie told me "no movie." As it's been a while since we've seen one, I suggested a compromise: We walk by the movie theater and then he could make a choice. He was amenable to this and so we got out and dodged raindrops until we came to the theater. Even from the outside, I realized that we were approaching Sensory Overload Territory. Lights flashed from the video games in the lobby and the concessions stand and even from the street we could smell the popcorn and something cotton candy sweet. I pointed to the movie poster; Charlie glanced at it and said "no" yet again and I could only agree with him, and that our $30 (factoring in the price of two tickets, a soda, and popcorn---maybe it would have cost more?) could be better spent. We went back to the car and I mentioned a couple other places that we might visit. Charlie chose Target and we spent a happy half-hour wandering aimlessly and checking out all the DVDs and CDs (and one quick pass through the shoe section). Charlie chose a Disney Classics CD that he used to have; it got so scratched and smudged that it became unplayable a long time ago. He said "no" when I asked if he'd like a soda and, once home, he helped himself to what he found in the refrigerator (leftover Vietnamese noodles and some lactose-free ice cream), listened to part of the first song of the CD, and was content to spend the rest of the day at home while it thundered and poured outside. Over the years, I've read Where the Wild Things Are to Charlie numerous times. I'm not quite sure what he made of the monsters or of Max in his wolf suit; the part of the book that usually made his eyes brighten up was when Max is in the sailboat that takes him to where the wild things are. The detailed lines and somewhat muted colors of the drawings never appealed to Charlie as much as the brighter colors and simpler forms in a book like Goodnight Moon. Also, the text of Goodnight Moon is written in something more like verse with rhymes, and is very much a listing of what's in the great green room, and not so much, like that of Where the Wild Things Are, a story. 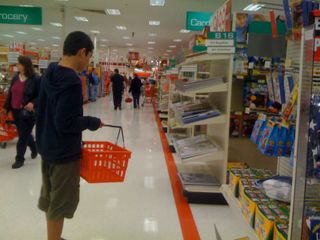 We indeed read Goodnight Moon many more times to Charlie and at his request than we ever did Where the Wild Things Are. To this day, Goodnight Moon is the only book that Charlie has himself taken up and turned the pages of, often while "reciting" the text. (He sometimes asks me to write out a few phrases from the book for him, like "cow jumping over the moon.") And so it was that, after many readings, I finally acknowledged that my interest in Where the Wild Things Are was greater than Charlie's; that it was I who loved the book's last page which notes that, even though Max has been gone for a good long time, his supper is in his room "and it was still hot." Charlie, you could say, was being a good sport to tolerate his mother reading a book that she liked and wanted him to, I've so liked Where the Wild Things Are because, what can I say, I've often felt I'm (like Max's mother) the mother of my own "wild thing," if one can be allowed to use the term and understood to mean nothing disparaging by it, but rather much affection and indulgence. Charlie, my boy, has a great deal of Max in him. When he's in the midst of a "neurological storm," there is something more than a "wild rumpus" in our house or car. I'm quite sure that various neighbors and passers-by have harumphed under their breath that Charlie, overcome by anxiety and whatever is going on in his brain, is some misbehaving' wild (monster?) child, with indulgent, clueless, pitiable parents who need to do a better job controlling him. All I know is that, however "wild" the moments and the ride with our boy, Jim and I always make sure that he not only has his supper, but that it's still hot. We're fine with  some wildness and even "wild rumpus" sort of activity here and there knowing as we do what a very great, special, lovely, etc. etc. etc. boy we've got.

I have a similar affection for that book, and my son doesn't like it much either. Frankly, I think it's too close to home.

My dear friend (and fellow traveler on a similar rode) Rachel wrote this in the motherlode blog: http://parenting.blogs.nytimes.com/tag/where-the-wild-things-are/

Sometimes I think that, instead of one of those Autism Society screenings, they should have a screening for ASD parents(with trained, able child care provided--I can dream!). We're the ones who need to see this movie.

I can so relate to finally realizing that you want to see a movie more for yourself than your kid! We just went through that with Toy Story and Toy Story 2 being on for a limited engagement. I asked him numerous times if he wanted to go, based on his former obsession 3 or 4 years ago. But he would never relent, saying they weren't Paramount films, which he has restricted his viewing to currently. I just couldn't argue, they aren't, and that is that! SOunds like the day turned out well anyway, and we too always make a trip to the audio visual section at Target, it's a must!!

Has Charlie ever seen the video version of Goodnight Moon? Leo loves it, but then his taste is the opposite of Charlie's -- animation yes, live action HUH?

mamacate, I think you're onto something....

Bonnie, yes exactly the same response in Charlie, though he didn't expresss it in so many words. I guess i'll be watching the trailer a couple of times.

Shannon, the GM dvd was one of Charlie's all time favorites. I can still recite portions of it! But he stopped wanting to watch it about 2 years ago and discarded a new disc quickly.....guess it's a sign of growing up and changing. (?)

When our son Jake was 13 and 14, he used to mock "teenagers," saying he would never behave as "stupidly" as they did, hating their parents, staying up all night and sleeping all day, etc.

Then somewhere in there, time passed and growth happened. What a trial for all of us! And Jake is a careful, thoughtful and fairly cautious lad.

The best resource I found was a book called "WHY Do They Act That Way?" http://www.amazon.com/WHY-They-Act-That-Way/dp/0743260716 , which gives informed laymen a well-footnoted explanation of the biological and hormonal changes in the developing adolescent brain. Jake's sleep cycles, like Charlie's, are the first thing to be affected, as you know. And you are using melatonin, which is one of Walsh's suggestions.

Of course, Walsh doesn't give "cures" for being a teenager - that's not really what a parent wants (we hope). But an explanation of why it's all happening helps.

Just as a small consolation: Jake, who just turned 18 yesterday, is still in bed, sound asleep, at 12:30 pm. "A Diller, A Dollar" was probably written about teenage boys.

And the fact that their pre-frontal cortices won't physically fully develop until they are about 25 means that consequences don't really exist for these boys-to-men. As you face the heart of your son's adolescence, te salutamus.

Thank you for the book suggestion---people talk about "hormones" constantly with Charlie but there's always a tendency to attribute everything to his being autistic, rather than looking at other factors. He entered puberty early and thoroughly last year and it's been quite a wild? _interesting_ ride....hoping things can settle for him sooner rather than later. Thank you again!

I think everything being attributed to diagnosis is a pretty common problem - which can get pretty annoying.

Sleep, been having some trouble there ourselves (falling asleep in the beginning), not sure if it's the change in season, getting used to being back at school, or maybe the melatonin is too low? Dimitri has woken up (between the hours of 2 and 4 usually), all of his life, but has been going back to sleep OK in recent years. Charlie at the moment also has extra stress with school, which may play a big role.

As for the movie, we are still hoping to see it (opposite problem, we now can no longer pass a cinema unless we intend to go in, even if Dimitri decides he wants to leave before the movie ends, it's a routine). Although after reading a review at Fighting Mosters with Rubber Swords, it may actually be too emotional a movie. We have enjoyed other live action movies such as 5 Children and It, or Nanny McPhee and even E.T. (all on the TV) The slower pace has been good for talking about whats happening and the emotions of the people.