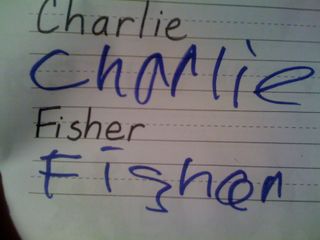 Monday morning the school nurse called me to pick up Charlie. His neurologist has prescribed an anti-anxiety medication for him to take temporarily while he transitions to a new school placement and one of the side effects seems to be drowsiness. After Charlie was in our car (parked in front of the school), I went back into the middle school to speak once more to the nurse (or rather, nurses---there are two at the school). As I was standing in the entranceway, I saw the Supervisor of Special Education entering the building. I walked up to her and requested an Emergency Meeting to discuss Charlie. I noted that we have requested such a meeting at least six times since we last met with the school district in September.

I am meeting with the special education administrator and Charlie's case manager at 10am today. This is the statement that I have prepared to include in his IEP. (I have only changed private names and some other details.)

Good luck- I'll be thinking of you.

Have you ever considered asking his previous cello teacher if she could provide private instruction now that he has left that school? It's so sad that as kids get older inclusion seems to decrease more and more- in preschool they are in inclusion classrooms, but by middle school they are practically removed from any contact with typical peers. Sad for the typical students, also.

30 minutes in and out. Kept calm and carried on.

I have been thinking of you all morning. xo

As it has been decided that Charlie needs to be in a more restrictive setting, we do not allow a decrease in services for Charlie.

thanks friends! am not sure if our requests will be met but it was good to sit down and just present everything in a thoughtful way.

@Nicole, I asked the music teacher and she said no but mostly because she is a violinist. she had high hopes that the middle school teacher would continue with Charlie. I kept practicing with him for a couple of months but eventually had to return the cello, sadly. Am going to respond to the rest of your comment in a bit, Charlie wants to go for a walk and then the sun just came out after 2 straight days of rain!

@Nicole -
"kids get older inclusion seems to decrease more and more". Is this really true? We'll be hitting middle school next year and I'm going to be fighting to keep our current restriction level. One of the things that worries me is that our current school can only provide a level A setting, so they did the hard work required for my son. I'm worried that if a school has a level C setting, even if my son starts off at level A, any problems will lead to that more restrictive setting, with the thought process being why work to keep him in a regular classroom when we've got a separate class up and running. That's why I'm looking to see what middle schools are available to us that have no segregated special ed classes.

Glad the meeting went well and you kept your cool. Now the ball's in their court.

Now that he's slated to go someplace else, I expect escalation of the usual DDI (Delay, Deny, Ignore).

One quick question. Do they refer to you and Jim as "doctor"? My experience in our district is that while they expect us to call the principal and others there with a PhD doctor, somehow they conveniently forget that I have a doctorate, too. I never insist on people calling me doctor when I'm at work (in fact, I introduce myself as "Joe xxxxxx". But it's kind of funny when people purposely lord their degrees over you.

Thinking of you guys. What a time. E-hugs to all three of you.