Home Archives Profile Subscribe
Once Upon A Very Unwild, Rainy, & Happy Saturday
It's a Mystery 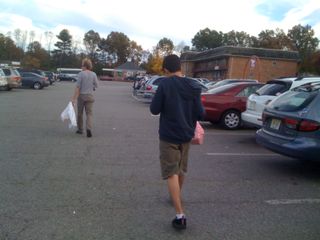 I'm not gonna hide anything. Sunday was difficult in a way that things haven't been for us at home with Charlie since early this summer; since all the way back to June. Charlie woke up smiling, smiled in the car en route to the bagel store, and completely fell apart when, not realizing how close he was standing to me, I accidentally, and very lightly, stepped on his foot. We all struggled through the rest of the day. A later morning bike ride brought smiles but Charlie was edgy around the house and called insistently for a favorite food, "spring rolls" (that's what he calls Vietnamese summer rolls). Charlie was about 6 years old when we noted that he often mentioned the names of his most preferred foods ("burgers and fries, fries burgers"; "sushi") when having tantrums/meltdowns/"behaviors"---I continue to search for the word that best describes these sorts of occurrences in Charlie; it's not exactly that he's having "temper tantrums" like a toddler, however things might appear to an observer. "Neurological storm" seems the best way to describe many, but not all, of them. Years ago, the mention of a favored food while Charlie was in the midst of crying and struggling and more puzzled Jim and me. Gradually we came to infer that Charlie said those words in moments of extreme distress in a furious attempt to comfort himself; in the strategy of "think pleasant thoughts and the bad things go away." Over time, though, sometimes the words themselves have, by association, taken on less than pleasant dimensions. And sometimes, as on Sunday afternoon, we've suspected that Charlie asking for "spring rolls" is not so much hungry as wanting some familiar thing, in the hope of restoring the world to some level of order. We've tried explaining (with photos, pictures, schedules, social stories) to Charlie that XYZ first have to be done. We've made calendars with photos showing Charlie that on N specific day, we'l get that item but we just can't every day. We've offered him other things that he usually likes to eat; he rejects them.  Some may ask, if a child is asking for food, surely he must be hungry---why not just get him something to eat? Numerous experiences offering Charlie "something to eat" and seeing him push or throw away the food have led us to think (counter-logically), just because Charlie's asking for food doesn't always mean he is hungry. Charlie's repertoire of words at any given time is limited and he quite often uses one word to mean several things, perhaps because he's only able to call up a couple of words at a time (and especially when he's not feeling good.) Often the best thing to do is to acknowledge Charlie's request and let some time pass, during which Charlie seems to realize that he doesn't need to get that one thing in order for the world not to fall apart.
Suffice it to say, yesterday afternoon, there was a heavy stress mood in our household. Jim and I often find it helpful to go and engage ourselves (or seem to engage ourselves, we're always attuned to Charlie) in other activities, to take some of the focus off him. Jim sat down to work at his laptop and, with Charlie sitting frowning across from me, I started boiling water for rice noodles, mixing up peanut sauce, chopping green onions. I was thinking of Charlie's own preference for making brownies over eating the finished project; for the process. Yesterday afternoon, he wasn't at all interested in what I was making, but I've found that absorbing myself in a non-verbal activity like cooking or cleaning with Charlie watching helps to keep all of us more peaceful easy-feeling. 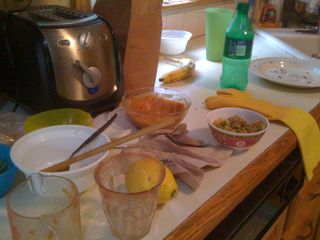 And when Jim said he needed to make a trip to Target, Charlie got into the car and so did I. Charlie and I managed to lose sight of Jim amid the shelves of Halloween decor and kitchenware (yes, we had our cell phones and duly regathered). Charlie got a box of brownie mix which we immediately set about making when we came home. After testing a bit too much of the batter (with a chaser of a hot dog and some shrimp in peanut sauce I'd made), Charlie was back on the couch when Jim said "let's have another bike ride!" and handed Charlie his bike helmet. They were halfway down the street when I ran out to wave them off. I'm not saying the rest of the Sunday was all sunshine-smiles and the like. Charlie and I aren't going to be making any trips to the bagel store on crowded Sunday mornings, not for awhile. And it's happened more than once these past few weeks that Jim and I have begun to feel that options for Charlie are growing less and less. Charlie's done so well at home since this past summer that seeing things start to crumble is, what can I say, dispiriting. So pardon us if we keep focusing, rather doggedly, on the little things along the way. I suspect the road will get steeper, and rockier, before it becomes smooth and level. And we'll still be walking.

I feel much will improve when he is away from the helmet and restraints.

Just trying to keep him together until then----

I've found too, that by, "getting on with things as normal", helps take the focus off whatever difficulty may be occuring(and yes also all without much talking)which helps Dimitri to move on and engage himself in something else.

I can totally understand the use of one word to mean many things, I think it's a very good adaptation using what means of communication are available.

Once the uncertainties of changing to a new center our over, things should settle down again nicely. In the meantime I think Charlie and yourselves are doing a great job of keeping the peaceful-easy feelings going which is undoubtably helping, although I imagine, some off days are to be expected.

Keep focusing on the little things for now and take heart in all those good moments.

Kristina, I can relate and I was thinking only the other day how it seems that the older our boy gets, the more sensory stuff is rearing it's ugly head, as well as his need for familiarity and calmness. One day can be awesome, and one day can just be, well, bad. I swear it's their hormones. Like you keep saying, things are so up in the air right now with all the changes that once he gets back into a routine, that "peaceful easy feeling" will return. I don't things for you are crumbling, so much as, shifting... Or so, that's just what I would like to think here.

You and Jim are an inspiration....thanks for sharing!! Here's to a great week for all of us!

Kristina--so much of what you describe sounds like the confusion of adolescence. This is not an easy time for any child, when confusion and lack of articulation make all the mixed emotions and perceptions feel even worse. For Charlie, the struggles must be even more intense as he searches for an outlet.

I'm sorry that the *one event* of stepping on his foot seems to have triggered the release...but I guess that release would have come at some point. Obviously, he's chewing on something. I'm hoping that when he starts the new school and the rhythm returns, things will ease for you all.

Thank you so much for sharing your stories, triumphs, and struggles. Much love to you and Charlie and your continued journey. BTW, I love the "process" too...something calming in the ritual. You can't always control the outcome, but the process, the rhythm, oh how I love thee. My respite is at least 2 hours a week doing some sort of process, my most therapeutic being cleaning and straightening the kitchen counters. *shrug*

to clarify, my respite is 2 hours of an UNINTERRUPTED process or collection of processes. Big difference. :)

It's so revealing when you say that you engage in peaceful activities that "take some of the focus off of him". Sounds like Charlie definitely needs space, to not be restrained constantly; he needs "head clearance", as do we all! And you are so incredibly sensitive to his needs ...

When what our guy wanted to say was complex, and he didn't have the words available for it, the words that came out would often be seen an mismatched to the casual observer. We knew different. You know different. You guys all have a lot on your plates right now.

@VAB, and if I hear one more mention of Charlie's "non-contextual utterances" as something to be given no heed to...........drives me crazy as he is trying to communicate with what he can, and getting discouraged from doing so.

@Monica, I've been thinking that Charlie needs plenty more actual/physical space and also just "space" away from others and certain kinds of demands. I was in the grocery store with him today and he is unbelievably tall (certainly from my perspective), with his head clearing the top shelf that I've never been able to reach. He really does need to stretch out, and to be.

@Ange, made lasagne tonight and left the dishes and cleaning to do after Charlie came back from a bike ride. It's much better to do those things when he's watching (and going in and out of the kitchen to check what's in the refrigerator) than things like typing, even reading...... yes I love thee process too!

I agree that it is part of adolescence and I imagine the growth spurt takes some getting used to. Nick is 5'8. Matt did okay at a feeding seminar we went to on Sat from 8:30 - 1 - we left before it ended at 2ish. Turns out the Dietitian and OT we had few yrs back for feeding therapy were part of the presentation. I think it was confusing to see them after few yrs and at a different location. We came home and after an hr or so went grocery shopping and then Rite Aid on Sunday. I am trying to get Matt out more on weekends and with weather soon to be fall like (today was almost 90) tomorrow is 70. We can soon start doing laps at the lake down the street. Matt loves to watch me cook and do things around the house - he helps get things for me.

But perhaps that's because, after rough days, I'll turn the radio off in the car and recite my favorite sonnet ("When, in disgrace with fortune and men's eyes...") or Wordsworth poem ("Earth has not anything to show more fair").

But that's a non-contextual utterance. Whoops.

As part of things changing, Charlie may be blaming himself for being the cause of the change. While at the same time not having difficulty processing it all, and wondering what all is in store.

As others have said, I feel confident that things will settle down over time. It's getting to that next place that gets a little rough at times.

Yeah, this definitely sounds hormonal - I agree with the others who posted this before me! Any teenager who throws food instead of eating is having hormonal issues. ;) The thing with kids like Charlie is that they just don't know how to get the message across any other way. He wanted comfort, and the first thing he thought of was food.

He was pretty clear - moreso than most teens. Consider yourself Lucky! ;)