Home Archives Profile Subscribe
It's Not His Fault
Ngin Ngin 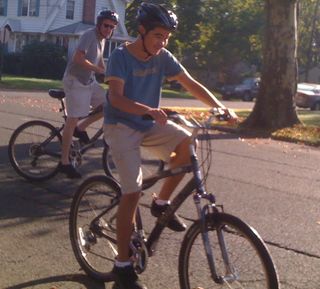 The New Dispensation: That's what Jim calls the new bicycle route that he and Charlie have been taking on their almost-daily bike rides. (It's not so much rain that stops them from riding but Jim's teaching schedule and the ever-earlier setting of the sun.) All summer long Charlie insisted that they do a particular ride that led them by a house where resides Nemesis Dog.

With all apologies to the dog lovers out there, this dog---big, white, and long-haired---always seems to be standing at attention on its owner's lawn just at the time that Jim and Charlie ride by. The owner has an electric fence up so the dog can't run out and chase bicycles and their (dog-fearing) riders. But explaining about an invisible e-fence to Charlie (especially Charlie on his bike with a clear look of get me outta here across his whole face) is not so easy, and especially when Nemesis Dog, prohibited by the e-fence, stands at the edge and barks barks barks barks barks. Loudly.

Not what the guardians of super-sensitive (to sound and otherwise) boys called for.

Charlie's fear is often mixed with fascination. When he was two years old and we lived in St. Paul, he had an all-consuming need to go and see a certain spot of red paint that had been casually splashed on the wooden step of a play structure on Selby Avenue. At the playground, he couldn't take his eyes off the red spot, though he didn't seem particularly happy, relaxed, or relieved to see the object of his fascination. (And getting him to leave the spot of paint made him, and us, decided not happy, relaxed, or relieved, you can be sure.)

Now it's been the same with Nemesis Dog, which appellation I've personally given said canine after Jim, having guided Charlie near and around and away from the e-fenced yard, noted that (from Charlie's perspective) the sole purpose in life of the dog seems to be to wait for 12-year-old boys on their bikes to ride by, upon which the dog comes running and raises an all-time bark-filled ruckus such that one 12-year-old boy in particular has started getting off his bike way before encountering said dog and pacing. And not wanting to get back on the bike.

Since the past week, Charlie has been taking a different route, one that takes him and Jim through the little downtown of our town and back and around the streets. Jim has termed this urban route (a huge overstatement if you saw what this town looks like) "The New Dispensation"---a quite fitting title and slogan for a new direction, like the one we're hoping Charlie is headed in, at least as far as his school situation.

One thing definitely to keep in mind: This new bike route was made by Charlie. Jim followed, and Charlie led the way. Street smarts? Those this kid has.

I can relate to the love/hate thing. We had that with a number of things, including elevators, which had to be visited and observed, but under no circumstances were they to be ridden in. Of course, with a big white dog, it is much easier to understand. Street smarts, as you say.

Pretty much every dog is Nemesis Dog for my kids (although we have managed over the years to make good friends with 2 dogs). It was interesting when they were preschool age and we'd be at a park and see a dog- it's amazing how quickly 3 kids can climb one mother when they feel motivated. For years we had to have specific walking routes that avoided any possibility of seeing a dog in a yard, which made getting places rather interesting. Last night we were walking home from the mall, and I saw one of our neighbours out walking her dog- not really a very nice dog, and she keeps him well under control. I warned Rachel that I could see him further down the road, and she promptly yelled "He is a VERY nice dog and will not eat me!" I think that we startled the people walking behind us :-)

Even though I am very much a dog person myself, I have to say that now I prefer them in yards behind fences, where we can't see them.

An electric fence in residential neighbourhood? I seem to remember a debate about their use a long time ago but I'm totally out of the loop these days.

(From Charlie's perspective) the sole purpose of the dog....
This made me laugh but it's so spot on, why would he think anything else? Glad to hear he is forging a new path.

Kristina, from your posts, it sounds like Charlie is on a developmental roll lately, coming apace. Does it seem that way? Many things seem like new growth.

Sometimes I wonder if the problem is that Charlie has outgrown his school.......he has outgrown the very tight, deliberately rigid and structured, ABA teaching methodology.

Dogs are territorial. To my dog, anyone walking, running or riding past our yard is a potential friend/intruder and she has to notify us right away that the perimeter is in danger of being breached.
My dog is the nicest dog in the world but she has a loud voice. She alerts us to the presence of friends and strangers by barking loudly and no power on earth can make her modulate her voice when she's excited.
Dogs like routine. Dogs like sameness. Dogs need to have a "job" to do or they start getting edgy. They're very much like people, particularly autistic people.
I think the white dog is thrilled to see Charlie because he (Charlie) is part of White Dog's routine. On the other hand, there's some trepidation going on because even though Charlie has never gotten off his bike and attempted to enter the yard, thereby breaching the sacred perimeter, he just might and that makes White Dog apprehensive and so he/she barks. I think Charlie and White Dog have a lot in common.

Thanks, Jill.......much that I need to learn about dogs! I'll work on telling Charlie that the dog(s) whom we encounter are greeting him, being friendly.....when he's seen other dogs (esp. when we are in the car), he'll say "dog, dog" and he's clearly very fascinated.

From reading your recent posts, I agree with you that Charlie "has outgrown the very tight, deliberately rigid and structured, ABA teaching methodology." I hope his new school will work with you to learn of Charlie's strengths and develop an individualized educational plan that works for Charlie. Sound to me Charlie is paying attention and fascinated with dogs. Could he have a dog as a pet?

um....confession....I'm not ready for a dog....enough taking care of my two guys and working but a part of me suspects that Charlie might like the idea......

When I was growing up, we had a big golden retriever, Tammy, and when my autistic brother, Stephen, would sit at the dinner table, Tammy would put her head in his lap, so that she could catch all morsels that fell her way (Stephen was a rapid and sloppy eater, so she would end up well-rewarded). Then Stephen would bolt up from the table, and Tammy would be literally right on his tail, nose pressed against his bottom, barking and snorting. Stephen didn't like this much, and Tammy was a nervous wreck most of the time around Stephen (his "eruptive moments" and constant motion and vocalizations really agitated the poor dog). Yet she was attracted to him, and never left his side (and I don't think it was just the surplus food morsels) -- they developed a special relationship. Stephen had been TERRIFIED of dogs before Tammy came into the house -- he used to scream and run the other way every time he saw one. But his relationship with Tammy helped him overcome this fear. I'm not advising that you get a dog at this time -- what chaos would ensue! -- and you should only consider a docile, older dog -- maybe even a special-needs therapeutically trained companion animal.