Home Archives Profile Subscribe
Day 2: In Search of an Oikia
What's the Goal of it All?

A Sense of Direction 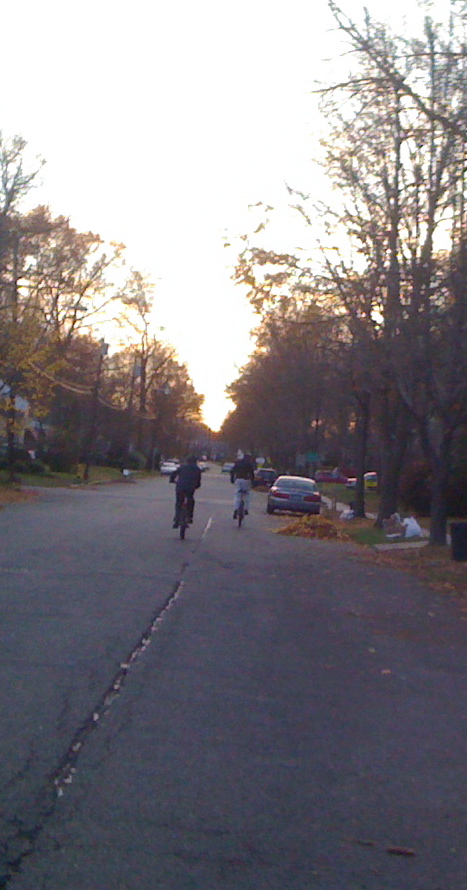 After I talked to the behaviorist (Charlie had art class; got upset for 10 minutes when asked to play Bingo around 11.30am, same time as yesterday; the behaviorist noted that one "behavior" a day is great and I told her we see it the same way at home: who doesn't get frustrated, mad, fed up with it all, ready to say the equivalent of "I've had it" at least one time a day?)----Charlie and I got in the white car and headed home. As we neared a certain busy intersection, Charlie started saying "this way" and then "that way."

"Right?" I asked him. "Right, yes," said Charlie. So right we went. A quick glance in the rear view mirror revealed him checking out the shops and other landmarks. "Straight?" I asked as we came to a traffic light. "Straight," responded Charlie, with careful pronunciation of his "r."

I had a feeling that Charlie was taking me on one of his bike routes with Jim, the one that goes over a certain bridge, and I was right, as the road we were on goes "straight" to it. We went up and over the bridge and then into a really busy area. "This way, this way," said Charlie, pointing. I knew home was "left" wards and that was the direction Charlie wanted to go in.

He really does know his way around.

That's been the case since Charlie was very young. When he was not yet two years old (and not yet diagnosed with autism), he could always find our then-car (a forest green Saturn, the original one) in the mega-parking lots of Minnesota chain stores (Cub Foods in particular). He knew that going left not right out the door of our St. Paul duplex meant that he would not get to see two of his fascinations, a stone wall at the end of the block and, a couple of blocks away in a playground, a red spot of paint. Then Charlie was fixed on getting to some goal. Now he seems equally, if not more so, aware of how to get there; of the process.

After a late afternoon bike ride with Jim on the new urban route, Jim noted that, when he points or when he even simply looks towards oncoming traffic, Charlie looks that way too, and stops. Jim doesn't have to say a word.

And, based on Charlie assuming the role of navigator in the car, it seems he's transferred what he's learned about cars and traffic from riding his bike to riding in the car.

I can't resist saying it: He really is going places, and thanks to his own smarts.

Yes yes, Charlie needs to be accompanied by someone else (at this point, us) when going anywhere. Yes we do know, hope, that someday he'll be able to manage with someone (completely trustworthy) else. But when we say, we go with him, we really mean it.

As for why "behaviors" at approximately the same time every day: a link to Charlie's medications (he takes these when he wakes up, around 7am)? because 11.30am is one of those "witching hour" times (another for Charlie has long been 2-5pm) when his energy is at a lull? because (the behaviorist speculated) that was when he ate lunch at his old school, but not now?

At his old school, "behaviors" happened at 11.30am, but also at other times of the school day. Needless to say, we'll be keeping an extra eye on Charlie around that time this weekend.

I do feel that, in a slow and as usual stumbling kind of way, we're all striking out in some new directions on this journey with Charlie.

Could be, he's expecting something else to happen at that time and it isn't, like lunch.

Maybe at that time they should be careful to ask him whether or not he wishes to do something. Make it clear he doesn't have to right then. And then give him that 10min or so to settle in again over that time. Even if he just sits and watches, or goes for a walk around the building.... something that's his choice for a few minutes.

I think the behaviours at the old school occurred for a variety of reasons... most of which was their rigidness and poor fit for Charlie.

Love it, so like my son who is Charlies age/grade, who learned landmarks really early on. I swear I could drop him 5 miles away @ age 2 and he could find his way home. Of course, I never did that... he was always attuned to his whereabouts and the best way to get home. Now he uses Google Maps & Earth to also navigate his favorite places.

It's great that the behaviorist is looking for patterns in the behavior. This will help them predict his behavior and, hopefully, find some way to tweak things to prevent or bypass his 11:30 "behavior".
I think it's also great that they aren't freaking out about it. It takes a calm head to help come up with solutions.
It sounds like "so far, so good."

If he used to eat lunch at 11:30 at his old school, perhaps he's acting out b/c he's hungry? Nik does that, especially if I lose track of time doing something. It gets ugly but is resolved immediately when he realizes lunch is on the way.

We also see some of those "witching hour" kinds of things when his neurontin hits "trough" time.

BTW, I love Regina's suggestion in your last post about asking school to observe & collect data on Charlie WITHOUT the helmet. Brilliant.

I'm doing the happy dance for y'all!!!

Quietly following Charlie (and team) and wishing you all the best on this new adventure...

This new school has the potential to be such a great place for Charlie. For one thing, he's just another kid there, as opposed to a "special" kid in a helmet and a private, closed off space.

But it's also *big*. It sounds like it has classrooms for different subjects, like music. It even has a cafeteria for him to travel too, where he gets food and companionship.

Charlie's acute positioning sense can be stimulated on an almost-hourly basis, as he learns his directions around the building on a room-by-room, hall-by-hall basis. For a boy who feels the Moment so acutely, that means many times a day to have that gratification and pleasure of attaining his goal, of getting somewhere. It's privately-felt victories, repeated over and over.

What is Charlie doing every day at 11:30, aside from perhaps feeling hungry? Is he in the middle of an activity he likes or is concentrating on? The pre-adolescent brain is developing new poers of concetrationa nd focus around his age, and "tweeners" *hate* to be interrupted while they are concentrating on something. Being asked to switch off their mental engagement, because someone else is interrupting them, really annoys them - as it does all of us!

Thanks for documenting all of his adventures in a way that really brings his environment vividly to life.

Maybe he's hungry if he was used to eating at 11:30 at his old school? I know I get out of sorts when my blood sugar drops.
I'm not sure what you mean by "behavior." Did he cry or complain or did he bang his head?

Needless to say, I just spent the past hour wondering if 'something' happened....... Charlie doesn't tend to get upset at home about being hungry. He does tend to get upset when there's some food he wants and we can't get it for him on the spot, and he starts obsessing over it!

GoogleEarth, haven't shown him that yet!

In both instances, he was doing something and had an additional demand placed on him. I've also wondered (following up on your comment, Louise) if he could indeed just be thinking of something else and the "switching" to follow some request causes said behavior (which tends to involve all the things Jill mentions).

I think that with all of those pairs of eyes on the behavior, you will soon get a feeling for what it's about (or even who; Nat, like all of us, has preferences for some people over others, even though they may be trained in the same approach). We finally discovered that it was about day of the week: Friday, when Nat was to go home. On Fridays he would be excited (not angry or anxious) and that would destabilize him some. I think you're well on your way.

Kristina, I'm most curious to know if the behaviorist has discussed plans to fade the helmet!! I can't wait for the day when I read that Charlie is done with it for good!!

@Louise, also wanted to say, thank you for reading; I get so wrapped up in thinking about Charlie regarding disability and autism that I feel I often don't think about things enough in the broader context of adolescense/teenagers.

@Susan, interesting about Nat and the days of the week---I've suspected Wednesday and Friday aren't always the "best" days for Charlie. Friday is (as it sounds like it is for Nat?) a transitional day.

@Christine, The behaviorist has discussed that in passing with me. On the first day she even said something like she could "definitely" see how much he wears it decreased. Everytime I hear about Charlie having a tough moment I worry, but we'll have to see and keep up the positiveness. I think!

Is the behaviorist in the classroom all day and act as an aide?

The other AM Matt did fine when he did not take his meds and drink before getting on bus - I noticed after bus left and teacher report noted he was fine, but was very sleepy at homd after taking that AM dose in afternoon and then the PM dose few hrs later - he slept 12 hrs from 5:30 PM to AM

Yet another overlap between Charlie and me--I've always had that inbuilt map system, too. It horrified and amazed my friends when I was able to take them all over NYC without having been there before, with only a map of the subway system to guide me. (I guess they thought the overstimulation would defeat me? Ha!)