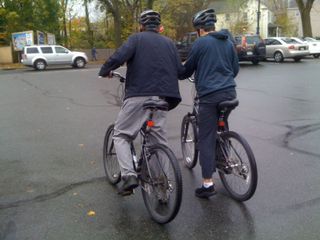 Let's face it: Halloween, in its current incarnation here in the US, is pretty much about (1) candy and (2) costumes. Charlie having been on the gluten-free casein-free diet for the better part of his life (from the time he was 2 till he was 10), most types of candy have been pretty much verboten. Even though he can eat whatever he wants these days, he's expressed minimal, as in near-zero, interest in M & M's, Tootsie Rolls, and even the boxes of See's Candy my mom sends our way. Further, Charlie is extremely hesitant to go walking up to strange, new houses, let alone to knock on doors or ring doorbells (and it didn't help that, when he first went trick or treating at the age of 3 in St. Paul, a dog ran out when the door opened; Charlie was, fortunately, definitely small enough to be swooped up safely in Jim's arms). 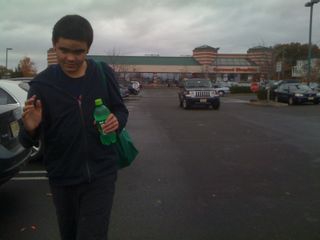 As for costumes, let's just say that it's been up to Jim and me to choose these for Charlie who has never seeming too interested one way or the other. He's been a snowpea (ok, that was when he wasn't even a year and a half old and I made the entire costume---those were the days); a fireman; a beatnik (with beret, striped jersey, and a goatee---Jim's idea); a wizard; a king; a hobo; a captain/Thurston Howell III (the costume consisted of a captain's hat, red polo shirt, khaki pants, and a blue blazer with brass buttons; this combo led Jim to declare Charlie to be that Gilligan's Island castaway, leading to Jim and me getting into a discussion about which character we might be) (I'll give you a hint: I am definitely not a Ginger type). For the past couple of years, we decided that lowkeying Halloween was the best policy. Charlie's middle school also lays down the law about costumes: Last year students were allowed to wear their pajamas but no costumes. This year, the principal sent home a bullet-point list of what was "allowed." (No full-face masks, for one thing.)  So we let Halloween 2009 be whatever it would. Charlie got up at 7.15am and he and Jim went on a morning bike ride. I met them at the bagel store (yes, the same one where a "neurological storm" ensued last Sunday) and we sat at an outside table while a man running for mayor canvassed every ingoing and outgoing customer. Charlie and I went grocery shopping and the sushi man offered to make him his favorite, eel sushi. This was quickly eaten at home, after which Charlie said "helmet" and he and Jim went for Halloween Bike Ride #2. 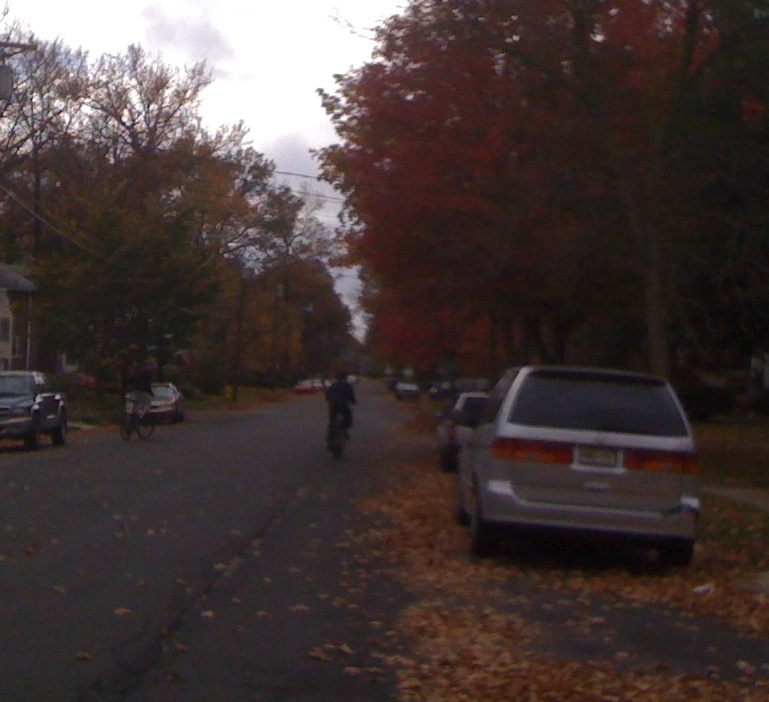 A number of children (one who was about 1/3 Charlie's size in a mask with long white hair and ghoulish eyes, a full-face one) appeared to trick or treat around 3pm and Charlie enjoyed just standing by and watching the action.  (Best costumes: Some girls his age who had metallic-looking chef hat shapes on their heads and tunics reading "pepper" and "cinnamon" and "basil" on the back----the Spice Girls.)

We went to visit Jim's mother. The last time we went to the nursing home Charlie saw a white dog (a therapy dog, I surmised) in the main room and ran out across the parking lot saying "all done." He refused to go in and after coaxing and bargaining with him for 15 minutes, I concluded that it was a great thing enough that Charlie was holding it together under pressure. Jim came out and I went in to see my mother-in-law: She was just falling into an anxious sleep when I went into her room. I stood reading the sign that said that she MUST have assistance to eat several times over and then quietly exited. In the parking lot, Jim told us that the nurses had told him that his mother asks for "Jimmy"---him---most of all. 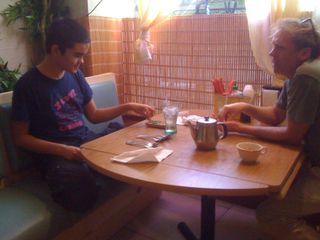 It was only 4.30pm by then. We've got into a bit of a habit of going to a Vietnamese restaurant near the nursing home and to there we went. Charlie was definitely ready for dinner (he's generally always ready for summer rolls, I guess you could say) and I got a Vietnamese coffee, which is a sweet treat thanks to a layer of sweetened condensed milk. It gets caramelized and offsets the bitterness of the coffee. Hoping your yesterday was something of a treat, too, and (like ours) pretty much trick-free.

Rufus is a no chocolate type dude, but he loves smarties, starburst and the like. Every year we go trick-or-treating, but this year without his sisters (they're old enough to want to do parties which Rufus & I aren't into) his differences stood out more, but he's totally excited to go. We had one near melt-down and some frustrations, but he returned home happy. It tires me out physically (I can't let him go to the doors by himself, so there are a lot of stairs) and emotionally (it seems sad that so much of the rituals are lost to him). In the end I'm happy to do it since it makes him smile.

First Halloween at the new house. Stepson #2, daughter-in-law, grandson, & stepson's mom came over for dinner. Yes, I am a fortunate woman: this complicated relationship, my stepsons' mother and I, have forged a friendship over the years. I am grateful for her generosity.

I did the suburban candy-passing out. #1 grandson at 15 months (MOL) too young to go around ringing doorbells.

After they left and the candy cauldron emptied, I walked down to the cross-street north: There the neighbors put on a Big Halloween Extravaganza. I walked about, introduced myself, and thanked each household for the Special Smalltown Flava.

C has the swine flu this halloween, so no ToT. He was devastated.

Mine last year (7) finally wore a costume willingly. Before that he was an infant.

This year (8) for a week I've heard "It's Hallowe'en", "Happy Hallowe'en", "R, spongebob square pants" (elder's last years costume)... And he'd show you which day on the calendar too.

Last night in bed he said "December?", Me "no not yet, November first". "No November, birthday".... WOW!!! Last year was the firsts (he enjoyed b-day's too)... this year he knows exactly when they are and like most children of his developmental level (4 to 5) wants it now. The Mom's very excited.

Bug has had an ear infection for the last four days, no Halloween for us, either... Of course, that could be a good thing. He wanted to dress up as the Monty Python Gumbies with a friend, and I think they would have been abused at school...

As you know, Nik's oblivious to the holiday at this point. We spent a quiet day doing chores, shopping and the like. He went out with his daddy for a good long walk around the local mall. Came home so tired he could barely walk! He was sound asleep before the first trick or treaters even showed up at our door. :-)

Pete actually enjoys trick or treating now, as long as his brother comes to the door with him. :-) He's not crazy about candy, except Kit Kats.

Sounds like a nice, relaxed day.
What is it with autistic kids and dogs? It seems like most of them are terrified of even the laziest, most placid dog. They don't seem to be afraid of cats but dogs, whoa! Is it the fast movement and barking that frightens them? I'm sure the therapy dog at the nursing home was very mellow but it freaked Charlie out.

@Jill -- my brother has Down syndrome, not autism, but is petrified of dogs nonetheless, mostly because he is scared of loud noises (so barking is bad). I can trace his fear back to one time when we were walking to a Carl's Jr. (west coast Hardees) and a little dog ran up to his wagon and yapped really loudly right into his face.

Fortunately, as he's gotten older, I've been able to teach him that any time he sees a dog with a vest (therapy dog, guide dog, etc.), that means it's been really well-trained and is not a threat. He's still wary but not panicky, and he's actually grown fond of a fellow teacher's therapy-trained dog, though every time he sees her, she has to approach him several times, very slowly, before he'll open up. (She's a wonderful therapy dog...she needs no coaching to do this.)

I agree with Charlie, much better to watch the action, let the other people dress up in sweaty costumes!