"Broken" has been a none too easy notion for Charlie to deal with. When one of his toys broke, when a CD got so scratched and scuffed that it skipped constantly, when the iPod mini he had a few years ago no longer played because it'd gotten thrown: Jim and I were hard pressed to explain why those items no longer worked. Emphasizing that Charlie himself was responsible for the breakage resulted in him getting terribly upset. Accuse us of being "soft," but Charlie's own distress and shame were consequence enough. For a time, we avoided over-using, and even using, the word "broken."

In the past year, though, Charlie has talked about things being "broken" himself and smiled, as if it's all a joke. Often him saying "broken" is followed with a short series of phrase like "all done tape, tape broken" or "bye bye Wiggles" (in reference to a CD of that group). He's often smiling while saying all this, as if he's reflecting on how things being "broken" used to bother him and now he's learned he can handle that;  his sensing the difference in himself is something to smile about. We can talk about "broken" now and not worry about the peace of a day being "broken" by a bout of deep unhappiness.

That is, over and above what has happened to various of Charlie's possessions over the years, "broken" has been a word with multiple resonances in our household. There's the wrongful notion that a child with a disability like Charlie is "broken" and somehow less than whole and perfect. There's the reality that, in our efforts to take care of Charlie, things have gotten broken, in both a metaphorical and a literal sense. Relationships and professional commitments: Jim and I certainly try our best, but these have sometimes gone unattended, in order to meet the day to day reality of parenting Charlie (especially in times when his needs have been very high, as in the past year).

Plenty of things have gotten broken along the way, from the cassette tape on which, years ago when he taught American Studies at Yale, Jim recorded bits of speeches and music for his lectures; to a couple of windows; to piles of photos of a much younger Charlie (these were not exactly broken but shredded to bits or soaked in water so that they stuck together---"broken" takes on different forms). Sad as one can feel on seeing things in fragments, we've certainly learned to take that deep breath, say "how important is it," and remind ourselves, Charlie is still with us, Charlie is with us, our small family remains intact amid so many gales and showers of flying objects.

When we had all the trouble with our school district over the past year, we certainly felt that everything was breaking down, that our long efforts to get Charlie the right education were crumbling before our eyes and all around him. Since this past June when Jim and I realized how great the gulf between us and the school district (and its teachers and therapists and consultant) was, we've felt, what can we do, and set about again and again picking up the proverbial pieces and carrying on.

It doesn't seem that whatever trust or faith we had in the school district is going to be as it was in Charlie's first two years, when he was happy and learning and included as much as he could be. Some things aren't going to be fixed and, especially after this past weekend which had "Transitional Period" stamped all over, we have quite moved on.

It turned out to be a quite uneventful weekend. Which is to say, it was a weekend of momentous events in a small way. Saturday saw the return to the diner and Sunday, Charlie went on a morning bike ride with Jim and a friend of Jim's. This meant extra waiting around, a totally different bike ride, and a long delay before getting Charlie's usual weekend bagel breakfast/brunch. Charlie managed fine through all that. He wanted to go grocery shopping soon as he and Jim were home and that was fine with me, as we needed to stock up on things for the week (for Charlie's lunchbox). Charlie got a pack with extra eel sushi; that was quickly eaten. He asked to hear his Disney CD and seemed pretty content to stretch out on our battered blue couch.

And with him seeming quite at ease, I decided to attempt a task I'd been putting off for months, fixing a ceramic cup. It's not just some coffee mug, but had become my own favorite cup. I used it several times a day and even brought it on the road a few times as it fit perfectly into the black car's cup holder. Then one gloomy night I was up too late and dropped the cup on its side in the sink. Fortunately the piece that cracked off was mostly a large leaf-like jagged section, with two smaller bits. All three pieces fit back together neat as a finished jigsaw.

And then the pieces sat in a corner until yesterday when I found some "Gorilla Glue" Jim had bought a while ago. I got the cup and the pieces, got the glue open, and (with gloved hands) got to work. I squeezed out too much glue; briefly let the cup rest on a magazine before I realized that it was getting stuck to said magazine; heard the just-glued on big piece of the cup fall out and break again on the linoleum; accidentally glued together a few strands of my hair (I know, pathetic); found myself sitting at the table holding the ceramic pieces in place and gladly listening to Mrs. Potts sing "Beauty and the Beast," while glancing at Charlie leaning contentedly back on the cushions. 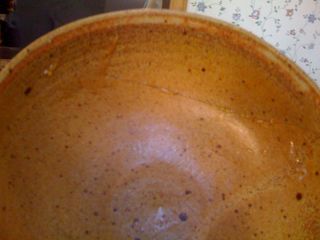 I'm not going to be volunteering to piece together any ancient potsherds from an archaeological excavation any time soon. But I was sufficiently inspired by my imperfect but passable repair job on the cup to attempt to fix something else, a bowl. This was a Japanese piece a friend had given Jim and me when we got married and two fragments (one quite large, the other a small triangle) needed to be glued on, and I did this just as Charlie's CD was ending. Charlie took the CD out and put it away, sat for a few more minutes, put on his socks and shoes and called for a bike ride. He and Jim rode off and, despite some loud honking from cars (Charlie tends to ride out a bit too far towards the middle of the street but drivers can really be pushy), came back smiling. There was a little nervous flurry around 9pm (I confess, I was starting to worry about Charlie needing to get to bed) but it passed (a quick walk around the block helped) and with Jim and me talking about how good Charlie's been doing, Charlie went to sleep.

I'd left the cup and bowl on the kitchen counter. By Sunday night glue was all dried and I rinsed and wiped them out. Not quite as good as new and not for drinking or eating (I used a bit too much glue, for one thing) any more, but ready again for good use. I'm just glad I was able to put them back together again, imperfections and all.

I <3 Gorilla Glue and use it frequently...
You may be able to reuse the cup, as the glue is not water soluble!
I had to laugh at you gluing your hair. Sorry. ;-)

Charlie now knows that "broken" does not mean "irrevocable", thanks to the healing power of your love and devotion.

My thoughts and prayers are with you on this special day.

You wrote this so eloquently, Kristina. He's going to be fine-you all have made sure of it.

This was encouraging for me as well.

Well, I'm glad I'm not the only one who has gotten Gorilla glue on myself! ;0)

I hope the new school goes well today. I will be looking forward to updates!

I'm glad it was a good weekend for all of you -- maybe a good omen of things to come? I'll be thinking of you and your boy today.

this is off-topic, so i apologize.

i was curious about how charlie handles haircuts. seems like his hair is always trimmed in the pictures.

years ago i started cutting my own hair to avoid barbershops. it's still kind of awful, so for a long time i've been in the habit of trimming it slowly, over a period of months. a tiny snip here, a tiny snip there. takes forever, but it tends to keep to keep it generally (sort of) managed. and with charlie's hyper-awareness of everything, i was wondering what that must be like for him.

maybe that's been posted before, i'll search. hope you guys are well this week.

I've met a parent that cut her young child's hair in his sleep, because he was so adverse to hair cuts. He slept soundly so she had a good chance to tiptoe in and get one side at a time. The drawback being that in the day(s) between catching him with his head laying the other way one side would be uneven to the other. :)

smart. i should just pay a barber to show up after i've taken an ambien.

You mention Mrs. Potts; ever notice how cute "Chip" is with his little broken edge...?

@Amy, I'm still getting all the glue out of my hair, ahem!

@M, Charlie handles haircuts pretty well. My husband taught him to go to a local barber and sit in the chair (an added attraction was that they had a cassette play with tapes---Jim had to save the tapes from being unwound several times). The barber doesn't make a big fuss over Charlie or baby him; they're very matter of fact. Charlie doesn't like rinsing shampoo out of his hair (that is, he doesn't like it when I help him rinse it out), so it's as well that his hair is quite short!

"My husband taught him to go to a local barber"

Jim is a man of many talents. and it's nice you guys found a barber who strikes just the right tone.