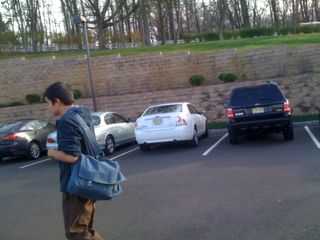 I think we all survived Charlie's first day at big autism center. I know it'd be more accurate to write that he survived as he was the one there. But with the tight team o' three concept (I meant reality) very much in play, Jim and I both felt this change.

Charlie got briefly, fiercely upset on waking up this morning. The feelings passed and Charlie cried, the heaving, heartbreaking cry. But then he stopped, lay on his bed for a few more minutes, got up and got himself dressed. He and Jim drove me to the train station and then headed for the center where a few snafus awaited them: Jim had been told on Friday that we could drop off Charlie at 8.30am. Monday morning, he was told, no. Our school district delivered the program books, some Legos, and the helmet while Jim and Charlie were waiting. We'd been trying and trying to get our school district to talk about fading out that blue plastic thing and they've been dodgy (that's putting it nicely) about addressing the situation. (While I don't want to waste any more energy criticizing the lack of, oh, humanity among the Powers That Be in our school district than I already have, I can only say that, once they got us all to assent to "Charlie being out," they pretty much stopped trying to do anything for Charlie, other than maintaining the already unacceptable status quo.) (Ok, 'nuff said on that.)  Jim and Charlie had to wait a bit before the new teacher came (she and the aides had to get the other kids---5 others in Charlie's classroom---off the bus). I found it rather to the new teacher's and aides' and the center's behaviorist's credit that they didn't really know about putting the helmet on and off (may it be said, the behaviorist consulting with the public school autism program that Charlie was in was not inexperienced in helmets). The behaviorist called me around lunchtime to say that Charlie was having a "great" day. Charlie followed the routine with the rest of the class, did some Legos, "loved" going to music. (Apparently he played the piano with a book the music teacher had? It's been months and months since he practiced at home and he always needed only his specially formatted piano book.) Charlie didn't eat much (we had suspected he wouldn't). He had one instance of head-banging around 11.45am, when he went to the nurse, to have his weight and height and blood pressure checked. The nurse asked him to take off his fleece jacket and Charlie did not want to and started banging. But it all passed quickly and it was agreed, blood pressure can wait, and he could keep his jacket on. Over the phone I noted to the behaviorist that we don't insist that Charlie take his jacket off at home if he does not want to; it's nice blue fleece (bought my mom, of course) and I'm suspecting that is provides security and protection. (And, fleece is fleece.) Charlie's teacher and the behaviorist walked out with him; they were smiling and easy-going. Charlie looked a little wide-eyed (hardly without reason) and was pretty somber in the car till we got closer to home and saw some kids bearing backpacks on their way home after school, too. Jim came home early while Charlie was heating up fries for himself in the microwave and directing me to pour on the ketchup. He and Jim were out on their bikes by 4pm. A couple times each block, Charlie kept getting up the bike and pausing and then getting back on. He was peaceful throughout and they got back as the sun was setting. Later the three of us went for a 6.30pm grocery store run during which Charlie, not finding the type of sushi he likes best, was ok to leave sushiless, but with a box of powdery Popettes; Jim and I wandered the whole store to find lightbulbs (which were of course right across from the CapriSuns that we had first put in the basket); I finally had a successful experience using the self-checkout scanner. (It helped especially that Jim was there and I didn't have to get frustrated over my ineptitude at scanning barcodes while keeping an eye on Charlie.) Pecaeful and lowkey: It was, minus about 10 minutes in the morning and at 11.45am, that kind of day at home and at school. We can live with that. Preferably with piano music. And if played by Charlie----ok, one day at a time.

Oh! What a good start!! I'm bearing in mind that Charlie has something of a lag with change, but this really is positive. I think it should be a great help being with people who don't have a preconcieved idea of Charlie. And it's great they have music (lessons? therapy?)

I think it's like his youtube typing. That boy knows a lot more than anyone has seen him do. Ha! We've experienced it enough times around here that when I called my mom to tell her Bede had memorized the periodic table and was drawing/writing it from memory that she said "Oh, that's nice honey. Say, what size shoe is he in now?" We've become so used to the jagged peaks and valleys of classically autistic development that it's old hat, so to speak.

You have spoken before about the lag in processing for Charlie. If there's another shoe to drop, here, I hope it goes as easy as it can.

So glad the day went well!

Wow! I am so glad Charlie had a great first day at his new school. I hope his new teachers will work with both of you to make his new learning environment less stressful then the previous one.

(and I hear you on the self-checkouts...any day that I get through one successfully is a good day!)

Yay! I was thinking of Charlie yesterday and hoping it would go well. I'm glad it did. :)

Glad it all went well.

I am impressed that they tell you the entire situation now when something goes wrong. All I got was "he (little one) pushed 2 children today".

Huh? Why? When? What were they doing? Did he push them or were they in his way and he simply ignored them.

Since he's not prone to excessive behaviour.. what exactly happened.

I got a note home re: eldest swearing - shut-up is a swear word?? - again, blame the kid, no context.

So, I'm envious of this new place, they seem to want to keep you informed and look for suggestions to help. Hopefully it continues.

Great report. What is the story with the dreaded helmet? So last century. Is liability driving the helmet issue? Worries that Charlie's family may sue if he becomes injured banging his head? Are there thoughts to teach him coping strategies other than banging his head? Linda

So glad it went mostly well! Hope this is the beginning of a good trend, Kristina!

Hurrah for a good first day. I love that Charlie cried and was able to calm himself to then get up and start the day, too!

Oy, the helmet. It's like the song that never ends, isn't it? I think it needs to meet with an "untimely" demise. Like off an overpass? ;-)

I didn't realze I was holding my breath until I got to the end. I'm so happy for the good day for Charlie!

I'm glad his first day went well. Maybe the new school will let Charlie go helmetless, especially since it was the public school district's insistence that he wear it. It seems like the whole helmet thing backfired since it only seemed to reinforce head-banging.

So happy for you three that day one was good!

I hope it gets better and better - and that the helmet will soon be a thing of the past.

I'm so happy to read this. And I hate to beat a dead horse, but I HATE that helmet. Hope to see it GONE very soon. xo

congratulations on a first day conquered. charlie is amazing, going through so many changes, absorbing all of that newness. i hope he falls into some good patterns there, begins to like his new teachers (i'm not worried about him, i'm worried about the staff...i'm hoping they're good ones). fingers crossed for you guys. he really blows me away with his strength.

"finally had a successful experience using the self-checkout scanner. (It helped especially that Jim was there and I didn't have to get frustrated over my ineptitude at scanning barcodes while keeping an eye on Charlie.)"

My favorite 'catch 22' on self checkout is having several bulky items needing 2 hands to scan, figuring the logistics on how to effeciently scan them while at the same time positioning myself to ensure Livie won't bolt, then have the conveyor belt on the receiving end stop abruptly because it's full! Kinda like playing supermarket Twister...right hand push, left foot block, left hand balance...

So happy to hear all this, Kristina!

Great day, glad for you all!

About fleece: it may also just keep him toasty.

Charlie is of course unique unto himself. For what it's worth, it is very common for "tweeners" to get almost obsessively attached to one of two garments that they love to wear day in, day out. (Our son even slept in his favorite jeans.)

I don't know if it is because it spares them the work of making decisions and getting dressed, or if it is a physical talisman that their bodies aren't changing and growing as rapidly as they obviously are. In that regard, Charlie is living up to being a true 12 year old!

Maybe I will advance to the point of playing supermarket Twister while measuring out fresh produce.....or maybe not!

Neurotypical me, sitting here in my fleece pants & my fleece jacket....

Thinking about as Louise said, "tweeners" & their garments.

I have a mental picture of my (neurotypical) oldest, aged 12, in his 49ers jacket, always worn completely fastened. I think it was a self-regulating, self-soothing thing, to always have the jacket on. I don't remember either of the two younger (also neurotypical) having favorite garments...oh, wait, except for the all-black attire for #2, and the flannel pants of various patterns but always flannel of #3... never mind.

Here's hoping the new school continues to "get" Charlie, and provide an environment where he can grow and learn.

so does Charlie have an aide at this class? Is there a new IEP scheduled for this school to work on a plan for the removal of the helmet? Great news on the piano.

I got Matt some fleece navy blue pants, I am really liking the uniform - makes it easy to find clothes the night before.

The teachers were smiling because after reading all of the (false) bad things about Charlie that were written by the previous school, they were pleasantly surprised to interact with such a great kid.

Things will soon get better.