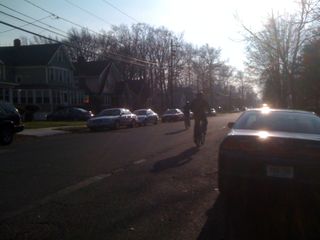 Friends joined my parents and the three of us for Thankgiving. There was way too much food, which is okay by me, it's back to work next week for us and a full-loaded fridge is more than appreciated.

There were nine of us total and a very very good time was had by all, especially as our friends' kids and Charlie were all getting over various colds. After waiting since the morning for our friends to arrive, Charlie said "thank you" when they gave him 2 CDs (one in particular he couldn't get me to open fast enough). He sat as we all talked and requested a bike ride with Jim. After returning, he asked to shower and go to bed at 6pm; he woke about two hours later, having slept through the meal. Charlie's not really one for turkey, stuffing, or pumpkin pie, so that was as well. It's been a long time since we've had any guests over for dinner, and we assured him that he'd done just great.

Holidays, with their disruptions in the usual order of things, are never relaxing around here. Charlie had slept from 9.30pm Wednesday night till 7.30am on Thursday morning. At 8am, he was dressed and ready to go out the door at 8am. I hadn't placed his lunchbox on the middle shelf of the refrigerator, "the sign" that he's going to school. But he did want to go out. So, on Thursday, there were two mini-bike-rides, each only some 10 minutes, in the morning; one mini-car ride to the gas station in the car my dad rented; one longer car ride during which we went to look at his school and its empty parking lot; one longer bike ride in the soft afternoon sun over a certain bridge; one bike ride on the "urban route" with the sun setting prior to the Thanksgiving dinner that Charlie didn't eat. To my deducing that Charlie wants, or perhaps rather needs, to get out about once every hour, Jim said, "Sure, he likes being in motion."

It is a long-time truth for Charlie, that moving calms and soothes, eases his thinking, increases his alertness, suits him. It's probably always why water in general and the ocean in particular (swimming and, too, kayaking last summer) appeal to him. I wouldn't exactly say that he's fidgety. Charlie can be hyper, but only at selected moments. For some physiological-psycho-sensory reason, he prefers not to stay in one place for too long. And perhaps one way he deals with new situations is not only by asking for a "break" from them, but also getting himself into motion, to work things through in his head.

At school Charlie has been requesting "breaks" in the form of walks regularly. While it was some years ago that a teacher and speech therapist first thought of having him ask for a "break" when his classroom became noisy and his agitation was growing. Including a walk or some other motion-involving-activity (I know there's a more eloquent way to put that, but you get the picture) needs, I suspect, to be part of the "break." 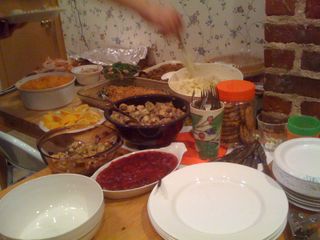 And riding bikes at the time that most people were loading their plates with a last helping of Thanksgiving eats and working the remote control worked out very well, as Jim told me. Honking cars and suburban Jersey traffic in general often makes his and Charlie's bike rides rather "exciting," but Thursday evening there was none of this. Jim and Charlie had the roads to themselves.

I think we'll have to make a holiday tradition of that. And sharing another Thanksgiving in such good company would be a good thing to repeat again, too.

Sounds like a great Thanksgiving! Patrick also needs many 'body breaks' throughout the day. Same as Charlie, he's not fidgity per-se, he just seems to need that motion and it seems to allow him to refocus.

It's too bad that Jim and Charlie can't ride in a more rural setting. My husband belongs to several bicycle clubs, including one based near our home in Princeton that rides through the Sourland mountains. It's peaceful there, with little car traffic. I think Charlie would like it.
On another note, has Charlie tried roller blading? It might satisfy his taste for motion.

We'll have to try a rural route one day---need to work on getting a bike rack again first. Charlie did try roller blading, had trouble with the balance part. He has been to roller skating and ice skating rinks and enjoyed it; the hardest part is learning to stop.

Hardest part is learning to stop; true about life.

Matt tried rollerskating in preschool and each time we would try going to the rink these past few yrs on days off they were closed.

I asked teacher to have Matt do a lap around PE track after lunch before computer class and he said Matt lacked effort (IEP progress goal) in writing his name - he thought would do much better from last yr, I explained regression every yr from long summer break is typical. I suggested Matt needed an incentive to do this any further so take pic of the track and tell him he can do a lap after he writes name. Will find out next month at IEP mtg if tried my idea.