Home Archives Profile Subscribe
That Way
The End and Some Beginnings 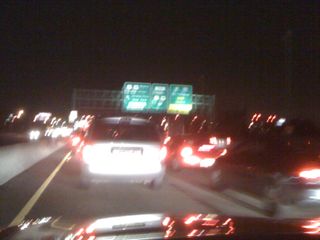 Thursday I picked Charlie up at the public middle school for the last time. Jim picks him up on Fridays (I teach all morning and into the afternoon).

But first first things first. Jim came home early to get ready for his speech and (but of course) for a bike ride with Charlie. (They took the new urban route.) The plan was for Jim to drive into Jersey City first in the black car. Charlie and I would follow in the (still new) white car. I'd get Charlie some dinner and he and I would show up at the halfway mark of Jim's speech. Rather than having to tell you that "the best laid plans are laid to waste," this plan---of us making an appearance halfway---was indeed carried out. This was quite remarkable due to a two-truck accident creating major traffic snafus in and around Jersey City Thursday evening that resulted in Jim in the black car and then Charlie and me in the white c-r-a-w-l-i-n-g at a centimeter now and then on the Pulaski Skyway and all the way up to Kennedy Boulevard, where Saint Peter's College is located. We had already been hesitant about bringing Charlie into Jersey City in the evening and then having to have him sit in a basically non-moving car on a high-speed-four-lanes-divided-by-a-mere-concrete-divider with every other commuter on Thursday evening was asking a lot, of anyone. Charlie sat quietly, occasionally putting his head down on his knees (plenty of drivers around us were putting theirs down on their steering wheels). Jim finally got in, Charlie and I got in, and I, having done some Googling on my phone, ordered some Vietnamese takeout for Charlie.

"No takeout," Charlie told me after we had parked and were walking to the restaurant in a freezing cold wind. We waited, he took off his coat. I suggested having one summer roll and then we'd go find Jim. "No dad, yes dad," said Charlie. He ate the roll and back into the wind we went. 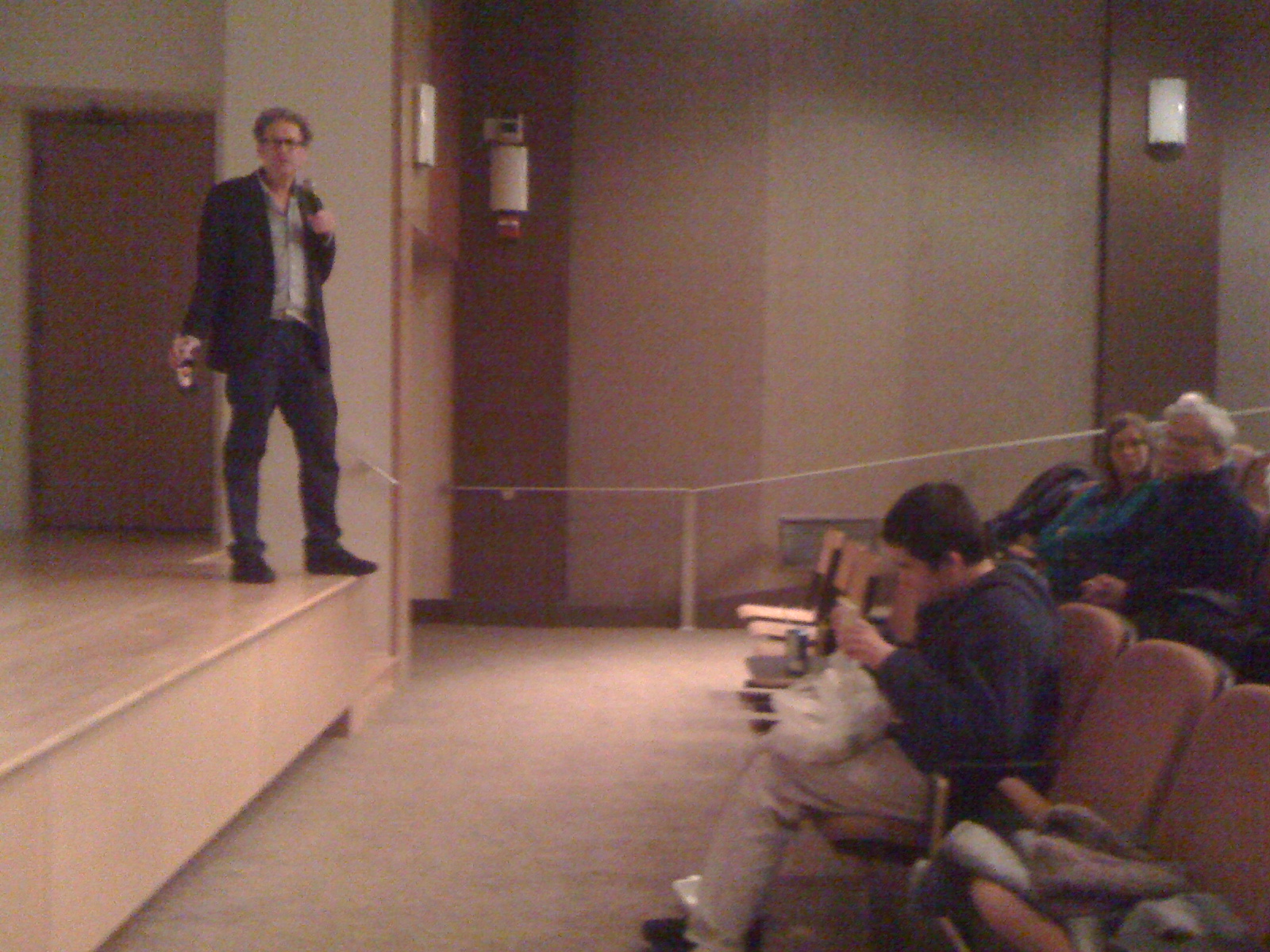 We caught most of the middle part of Jim's talk, Charlie finishing his dinner in the front row and then standing to the side, the better to watch Jim in action. Around 8.15pm I whispered to Charlie, "White car?" His answer was affirmative and he and I quietly left (after a friend took our photo in the entranceway.) Our ride home took about a fifth of the time the ride to Jersey CIty had. Charlie told me "no bed" and then went into his room. I folded some laundry and heard a little cry, a few light knocks. I kept folding: We'd asked a lot of Charlie this evening, and of course he needs to express that aggravation of sitting so long in traffic and then still having to wait to eat, and being at a lecture and the lights and buzzings in a strange building, and the two ambulances that came roaring up Montgomery Street as he and I drove home. And, of course, today---this 13th of Friday---is a big day, Charlie's last at his old school.
Jim said it in his speech: It's because of Charlie that we came back to New Jersey from the midwest after Jim got a one-semester position at Saint Peter's in the fall of 2001. We knew that Charlie had to be at the lecture last night when Jim was talking not only about his book, but his book that is very much about Jersey City and its history and a few characters involved in many noteworthy events. (In which number we of course include our very special boy.) 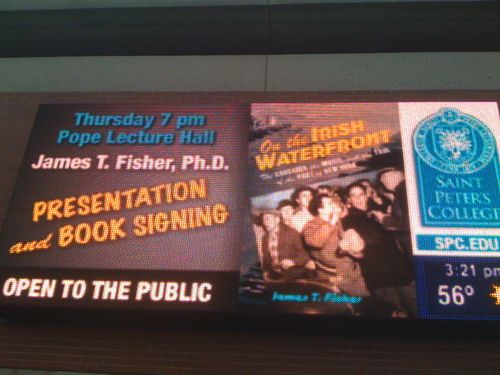 I'd be thinking hard about stepping out of the car to "stretch my legs" halfway through such a drive.

That's definitely an accomplishment on his part. Especially holding it together till he got home, it seems he was self-aware of the stress he was under.

... and of course on your part, too. Trusting him handle things himself.

The tight team of three always seems to be so busy!! The traffic looks appalling, and it's funny how Charlie and other drivers seemed to be reacting in the same way, head on the steering wheel, head on the knees.

"Charlie sat quietly, occasionally putting his head down on his knees"

extremely impressive that he managed the night so well. that's a lot to take in and he was able to wait it all out. yet another anecdote that i wish his school could know about, absorb. he's growing and changing so much, it's always a joy to read about.

I love that photot, and I love that Charlie made it through the evening pretty well despite the obstacles and today's situation.

Last day was peaceable too, any antics only by the adults I would say---getting there is half the fun, let me tell you.