Listening on the Wild Side 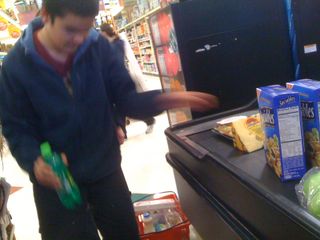 My longtime blog-friend Gretchen wrote this yesterday in regard to my account of our Sunday morning visit to Barnes & Noble and the purchase of a familiar DVD:

How do you and Jim handle it when Charlie asks for things that you just don't want him to have anymore/don't think are "good" for him anymore? Henry will hound us for certain activities, dvds, books, etc. and it is so hard to tell him "no", even though we think he needs a break from that perseveration.

Charlie definitely gets "stuck" about wanting certain favored items (CDs, food). But the fixation is just one part of it. Like Gretchen's Henry, Charlie often asks repeatedly for those certain things over and over. Sometimes I think his repeated, persistent, insistent requests make things even more difficult for Charlie (and in general) than his obsession about (for instance) the Louis Jordan CD or Vietnamese summer rolls. Often one request will turn into regular, repeated requestings and no answer----certainly not "no"---seems to be able to divert Charlie. Even if and when the preferred item is presented, Charlie seems only fleetingly at ease, if that. It's almost as if finally getting the preferred item just fuels more anxiety in him, as he worries about having to get it the next time. Following the advice of various ABA therapists and teachers and books, we've tried to "redirect" Charlie to some other activity or topic of speech, and to reinforce him heavily when he was engaged in these. In the short run, this sort of technique did seem to help Charlie pull himself away from whatever he was so fixedly into, and to prevent a big old tantrum/neurological storm sort of thing from occurring. (We had noted that heavy-duty obsessing can lead to Charlie having one of said "storms," as he gets, it seems, overwhelmed by his own (racing, pulsing) thoughts.) In the long run, we've noted that, even when one obsessed-over item (Barney videos) is no longer obsessed over, something else is. So the issue for us is to help Charlie manage and modulate his tendency to fixate. We used to think it best to make sure the over-obsessed items were no longer available and "ignored" Charlie's repetitious mention of them. In the past year, we've instead said "fine" to Charlie getting some of those really really wanted items and, when he's talked about them over and over, acknowledged this, usually with minimal, quiet and sometimes not exactly verbal ("uhhmmmm") sorts of language. That is, we've been acknowledging the object(s) of Charlie's obsessings, rather than not acknowledging them at all.

A few years ago we learned that providing Charlie with the foods he tends to obsess on (ketchup, bageks) had the result of him ceasing (slowly) to desire them. That is, by making the "forbidden fruits" readily available, the magic allure wore off and he ceased to be crazed to have to have those items. DVDs and CDs and certain books are a bit of a different matter, it's true. They can be available all the time and Charlie definitely gets way too drawn into the DVD and CD album covers. Lately we've tried the admittedly tricky approach of letting him have those (seemingly) much wanted DVDs and CDs, and readying ourselves for the sort of things that happened Tuesday afternoon when, listening yet again to the Disney CD, Charlie cried out, got up, and went out the door running. That went on for a good ten minutes. For me, trying to stop him (aside from being not so easy, since he's at least seven inches taller than me) is not exactly possible. So I stand by and make it clear, yes I am here and let him run it out, back and forth. Charlie did and was calmer, and then on and off frenetic for the rest of the evening, now asking for "bedtime" and then as quickly saying "no bed."

He did take himself to his room by 7.30pm. He didn't sleep and asked for the CD player, "musics." Jim and I had agreed to let the CD listening go on hiatus and I knelt by the CD player and first found Charlie some jazz piano and then (after the German announcer came on for a seemingly endless amount of time), classic rock. Charlie told me to go and I did; when I stopped in to check on him ten minutes later, he was sitting solemnly on the side of his bed while "Eleanor Rigby" came on and then Lou Reed doing "A Walk on the Wild Side." Charlie does seem to need some control in his life right now, with the change in schools ahead of him. While it seems counter-logical, maybe it's precisely some randomness, some walking on that wild side, that can help to balance things out, to cast some light and breathe some air into the situation; into fixations that can't just be let go of.

My son is 36 now Always loved music-used to take toy
record player on visits when he was smaller to calm him.Always have obsession and echolalai. Now insists on carrying four full shoppoing bags everywhere Favourite words Poofter[doesnt know meaning] hairy gorilla Pleased he can do CDs and tapes himself. Always loved Ketchup Prefers savoury things I think taste is sharper

Lot in my book about him and photos

These things are judgement calls. The balance of comfort vs. growing through challenges. The need to find a way to fit into society vs. individuality. The needs of the individual vs. the needs of the family vs. the needs of school/society. It never stops. We try to have times and places where comforting perseverations that are activities are allowed. Echolalia is so much a part of him that we only try to extinguish it is situations where there needs to be quiet, and that is only partially successful. When a phrase gets to the point that it makes someone in the family crazy we work towards re-direction. Some activities and phrases fade over time, others seem permanent. Ketchup is both finger paint and something to be licked off of fingers and hands, but it comes after all the real eating has been done. Compromises abound and it's a patchwork approach that's hit and miss. But generally Ru's a happy guy and that seems like the best measurement of success that we can come up with.

And acknowledging what is said is important, I think if you didn't, the path would be to give up that type of communication altogether, and frustration and anger at not being able to get a point across.

Both "no" and "broken" are still extremely tricky words for us, but I'd rather acknowledge what is being communicated and then redirect than ignore. And each year we see how Dimitri is learning and maturing, however slow the process may seem at the time.

I am hopeful that the new school will leave Charlie with more space to be as he is, rather than otherwise. One source of "behaviors" (we think) has been his current school's insistence on "giving him language." At many moments throughout the day, they have him say various phrases; I've rather fond that this particular strategy has the potential for a great deal of frustration, as it involves not heeding that Charlie is already communicating, albeit not in ways that everyone might figure out, at first.

>> These things are judgement calls. The balance of comfort vs. growing through challenges.

Indeed. The times to let them work through their fustration and the times to avoid it. Avoid it for safety, convience (yeah, other people live in the house, too), or creating a pattern of failure.

You don't want to set him up for failure over and over because then he'll learn the pattern of failure. Yet without the occasional failure it is hard to gauge "far enough".

For G one tough area are computers, both video games and "productivity" applications. He's got very good hand-eye, problem solving skills, and persistance as well as he has learned a lot of language skills through typing and drawing on a computer. But there are challenges that are TOUGH, that can take hours or days to crack, and he will get swept up in his fustration as the irresisable force meets the immovable object. We try to watch he doesn't spiral his fustration into a meltdown, to jump in to help him learn to cope with mounting fustration and work through. Or if he reaches meltdown try help him out quicker (getting into G's face with calm intervention is actually helpful for him).

In some ways it's been a good teaching opportunity, we've seen very percievable progress. But I don't doubt there are instances where it's been determental, too, when we could have handled it better. Let it go too far before intervening. *shrug*

I guess getting over and past the inevitable making "non-optimal" decisions, living with imperfection, accepting that good enough is good enough, isn't just for our kids. :)

Thanks for opening this up for more discussion Kristina. I have relied on your thoughts for many years now:-)

Our current "obsession" is watching videos on youtube (Power Rangers, Disney). And we do feel that the more he watches them the more drawn into them he becomes until he is unable to tear himself away.

Ironically, our home computer has contracted a virus (from all the video watching, I'm sure) and we have all been banned from it this week. Henry seems calmer, is turning to other preferred activities (like puzzles), where he can at least be interacting with the rest of us, take a break to eat, etc.