Home Archives Profile Subscribe
The Limits of ABA 2: Keeping it Fun and Flexible
(Another) White Car 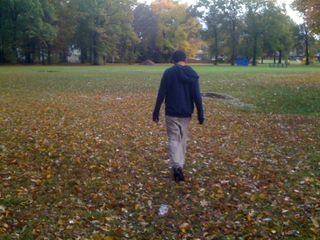 What's the best school, the right school, for Charlie?

Once upon a time, I think we thought we knew, or at least had a strong inkling. It had to be ABA-based, had to have lots of structure, 1:1 staff-to-student ratio. Had to have staff with a certain type and level of training.

Since Charlie was diagnosed with autism in July of 1999, we've heard about, and done our best to learn as much as we might, about the varieties of ABA (verbal behavior, pivotal response training, and more) and about the varieties of teaching methodologies for children on the spectrum (Floortime, RDI, and so forth). We've returned again and again to ABA due to, as noted, the severity of behavior issues that Charlie has had.

While his current school program has, on paper, what he "needs," there are clearly some missing ingredients. One that Jim and I have been discussing is that, at least in the middle school where Charlie has been a student since June of 2008, there does not seem to have been much (any) effort(s) to think about how to make his program, and him and the other students in his class, be a part of the middle school. Because Charlie's academics are far from the level of the other middle school students, he was not included in any settings with non-autistic peers at the school, and then his behavior problems mushroomed to such an extent that for "safety" any kind of inclusion became out of the question.

This leaves the question hanging: Did some of Charlie's behavior issues stem from the lack of inclusion, from the fact that he was in one not too large classroom with windows looking out on a hallway for almost all of the school day (including lunch)? Did the ABA consultant or the staff in Charlie's room seek to work with the principal and other school staff to weave Charlie's classroom into the fabric of the middle school----or were Charlie and his classmates (and the teacher and her staff) more or less plunked down in the school, consigned to whatever classroom was available, and considered fortunate even to have that?

The whole experience has got me thinking very hard about what is needed to create an autism program in a public school setting.

It's not simply that "ABA wasn't working." The middle school has not been a setting willing, open, able to accommodate for students like Charlie. As he has not been able to "fit" into the model provided, he's being removed from that setting.  But will any more efforts be made to create a school program for kids like Charlie, kids with his range of needs and challenges? Is such a program possible for every student on the spectrum in a public school setting? And as for how the proposed changes in the DSM-V might affect school placements and program---not sure we're all ready to start going there.

I have to admit that Jim and I have been feeling relieved that Charlie will no longer be at the public middle school. It's a very restrictive environment, and not only for Charlie, but for all the students---leading me to realize, I don't think I would have wanted to send a non-autistic child there; something a little more nurturing with less of a focus on Achievement and Discipline would be our personal preference. In other words, the questions I've been thinking about as regards schools for kids like Charlie are really questions about schools in general.

I've no answers. The questions seem to be multiplying by the minute.

And on a completely different note from pondering what to do about the education of students on the autism spectrum, is another topic that Jim and I have been going over more than a few times. Both Jim and I had a very hard time in middle school. Jim was helped greatly because he happened to be in a small school, a Catholic, diocesan school in the Connecticut town he lived in. But he still struggled plenty (ADHD before anyone called it that and nuns don't mix). I struggled through two years (the second completely miserable) at a huge public junior high school in Oakland, at the end of which my parents found a last-minute spot for me at a small private high school on the Oakland-Berkeley border and while I still had "stuff," I certainly thrived academically.

Jim and I made it through, somehow or other; somehow or other found our way, and perhaps in despite of what school had to offer us. Given the history of both of his parents in their middle school/adolescent years, I supposed we shouldn't be too surprised that our son has his middle school blues/struggles too. Forget about "recovery," mainstreaming, inclusion: Our goal right now is to keep Charlie out of a placement far more restrictive---institutional---than the one he soon will be at. To keep Charlie with us here at home.

At this point I think that it almost matters more what type of people are in the school, rather than which type of philosophy or program the school offers on paper. We've had amazing teachers in schools that have very little in the way of facilities or programming (the teachers/aides ended up figuring that out themselves), and horrendous teachers in schools which looked wonderful on paper and supposedly offered everything we wanted. It doesn't help much in making a choice as you don't really get to know the people until you get there, but I've usually found that if I'm immediately comfortable with a teacher, my child is likely to do well with them.

I think the most important point you've made here is that Charlie's current school was attempting to educate in a vacuum. As you, Jim, and Charlie know and show us all the time, life is really what happens outside that classroom. Seems to me that Charlie's educational environment needs to take that into serious consideration and begin to give him skills and coping mechanisms to continue to thrive in life outside the four walls of school.

I keep coming back to my kids' experiences, which is/was that as long as schools were trying to "include" them, they felt peripheral. When they were in specialized settings, where everyone, from the administrators to the teachers, to the cafeteria workers, were there to work with kids like them, they felt "normal." They had peer groups with whom they could relate, their externally-induced anxiety dropped markedly, and they had the space to figure out who they were and how to be the happiest them they could be. Inclusion works only if kids are actually being included - for my kids, being with "peers" means being with kids like themselves, and that's the ONLY way they were every truly included.

This is one of those issues where "your mileage may vary." To me, the problems that you are seeing aren't "public school" problems, they are massive, inflexible middle school problems. Add into that the impression that the your school system is "one of the nation's finest" and you've got problems.

For us (and I know that this is not a universal solution) a small, flexible public school that truly includes special needs student seems like the best solution. My son is included in regular classroom activities because there is no separate special ed classroom. He gets a one-on-one aide because he is in a public school. The staff and students treat him well because they've gotten decent training, because from the principal down nerological diversity is valued.

For my son, I've seen that he learns mainly from his peers and modeling what he sees. When he was at an Autism specific school with kids that had many difficult behaviors, this meant he was always modeling problem behaviors. That meant most of his school day was spent on quashing those behaviors, which in turn lead to a stressed-out child and more problems. When we went to move to full inclusion there was scepticism, but they could see they weren't getting anywhere with my son so they were willing to let him go.

What my son needs is public education where he is truely included. Private schools that are not special ed specific would never allow him to attend. Special ed specific private schools would not give him peers to model. We're working on finding a middle school setting that is small, personal and values neurological diversity in the same way that his elementary school did. It takes work and we'll probably be trailblazing with the first "really autistic" kid in the school, but I think it's the only path for us.

I dread highschool. Luckily we are in a K to 8 so inclusion will continue and he's doing very well. The chatter this year, the opinions.. Did you know he'd rather work with a boy not a girl?? That was one of the converations the EA sent home btwn him and her... conversation.. Never dreamed.... no behaviour, he worked with the girl... but he didn't want to at first. WOW!!!!

I'm dreading the automatic toss into a "self contained classroom" like the one Charlie was just in come highschool. Thankfully that's still 6yrs away b/c right now, I don't know what to do.

Between state performance standards (No Child Left Behind) and overflowing enrollment (more people pulling kids out of private schools as the economy sours), life at our primary school also focuses on "Achievement and Discipline" more than what I'd like.

I shudder at the prospect of middle school (two years away for us) as that is even more crowded.

What type of situation (inclusion, specialized setting, etc.) is offered for each individual often seems to come down to what they have available, as well as what THEY think is best. Never mind that you're the world's expert on your kid.

And this year unfortunately also confirms to us that results are indeed very specific to the attitudes of the teacher(s) in the classroom. Even in a "good" school, with a "good" principal, things can get difficult.

Charlie really did have some positive experiences in elementary school. we just drove by his old elementary school yesterday and he had a big smile on his face. he talks most about one of the aides he had there. but middle school---it's been a beast!

Also at the elementary school, Charlie had regular opportunities to play at recess with "typical" kids. His classroom had scooters and the other kids wanted to use those. There was just a sense of there being more "flow" between his classroom and the rest of the school. Also, the kids had lots of chances to see Charlie and his classmates doing other things, whereas now they only see them with the aides in their room, or doing gym or other things as a separate group.

The town we used to live in didn't have much of a program (which was why we left). But when we moved there, we had thought that it might be possible to make this town work, simply because we thought we might be able to push for more things to have Charlie included. Unfortunately other things happened and that town's school district didn't have any appropriate placement fro Charlie (leading us to move to the town we're in.....no geographical cure, that's for sure).

one of the things i find most difficult, as a middle school based school psychologist, is trying to find true, meaningful ways of providing real social interactions that are not scripted for my kids who happen to fall on the spectrum. It is hard enough to get them to be civil to fellow NT's, much less neurodiverse peers.