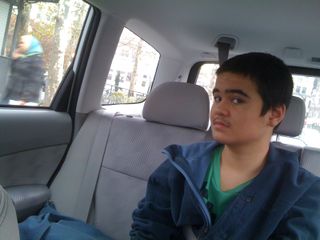 Charlie said "that way" the other day for the first time ever. He often says "this way" and points, more or less, in the direction that he wants to go; he also occasionally uses the phrase "this one" to indicate that he'd like some item over and not another. I'm not 100% sure that Charlie understands the difference between "that" and "this." His use of English grammar in his speech is not something that gets worried over muchl Charlie's longer phrases and somewhat-sentences ("I want to eat") tend to be somewhat rotely used by him. Nonetheless, any new word or phrase Charlie says, especially when it's on his own, always sound good to our ears.

And come to think of it, Charlie's been saying more than a few new things of late. He's not only been pointing and telling us to drive "this way" but also telling us which way.

We say "left or right"; Charlie tells us "left."

We say "turn or straight"; Charlie (after a pause) tells us "straight."

Of course, there could be a bit of echolalia going on here and we have had on occasion to tell Charlie that going "this way" means we're going somewhere we're not so sure about. It is the case that Charlie has a very good sense of direction, further strengthened by all those bike rides with Jim. Charlie certainly knows his way on the streets and to stores and playgrounds and many other locales. Sitting in his post in the middle of the back seat, he keeps careful watch out the side and front windows, turning his head and his pupils flitting back and forth to check to see what's out there.

Charlie is very attentive to where he is and where things are here in north and north-central New Jersey where we live and drive around so much. He was over 6 years old when we moved here, having lived previously in central New Jersey (which really does look different, really); three different places in and around St. Louis, Missouri (Charlie was born in the Gateway City); and the upper floor of a duplex in St. Paul, Minnesota. I wonder if there's some deep memories of places we frequented and routes we traveled in Charlie; wondered if sometimes he might be in some place in New Jersey---like the little bridge not too far from where we live---and have some sort of flashback and think, why do I have this image of another place (a certain bridge on Selby Avenue in St. Paul that we used to walk and drive over lots) in my head?

It was at that very bridge that Charlie got so upset on, on Sunday.

Everytime he bikes over the bridge with Jim is he thinking, hoping, that he'll see the vista we once saw in St. Paul? And does he wonder, why am I not seeing it anymore?

We've shown Charlie maps and a globe and tried to explain about the different places we've lived in, and how we've moved around. We're not at all sure what Charlie thinks of this. We do know that his sense of space and place is very much rooted in his experience of going and getting to and being places, whether they're right here or someone over, out there, far far away.

And we do know that Charlie has started saying more words, new words, and just talking more at times of stress and change; at times very much like now.

I was thinking the other day of when he tried to walk home from California.

You've got me thinking about understanding distances now - even going by metro could seem odd to Dimitri, you go in one place, and come out somewhere completely different - what happened in between?

Charlie looks so serious! I think he maybe raising his eyebrows at his mum with the phone:-)

This is familiar territory to me as the father of a boy who didn't used to speak much but had a good sense of direction. Directions are a great conversation subject alright. It's cool to see Charlie adding new words to his vocabulary, that's something that can grow and transform very late on. in fact, our guy made his biggest advances when he was the age Charlie is now.

Charlie's 'this' and 'that' make me think back to an early phase of Jeremy's permanent language acquisition, when his language could be summed up by a very simple grammar:

It was a very big deal when he extended the grammar like so:

because now for the first time he was identifying choices between alternatives...

My goodness...he gets more handsome every day! And how wonderful that he's verbalizing more at the moment. I was thinking last night about a couple of my kids who are exhibiting some more troubling behaviours at the moment, and remembering that in the past increased behaviours have most often gone hand in hand with developmental spurts. (Although that may just be something that I tell myself to find some way to deal emotionally with the behaviours!)

Directions and a sense of place are very interesting- although my son is non-verbal, he is very good with direction, and has often gotten his workers "unlost" when they make a wrong turn on their way to our house. We're still not sure whether we've had any luck in explaining geography (cities, countries etc.) to him, but he definitely can figure out how to get from one place to another.

My eldest was always the one with the maps and the keen sense of direction.

We knew his bro was ok around here but during the last 6mths has also become a "map-a-holic". He can't tell you where he lives, but he can show you.

Being born and raised in the same neighborhood in St. Paul, I also have Selby Ave. and that bridge embedded in some sort of permanent map in my head! It's sort of a polarity that I've been oriented toward ever since, no matter where in the world I've been. Charlie, with his excellent directional sense, is even more directly attuned to the place of his earliest memories.

What a handsome boy. He looks like he belongs behind the wheel!

How exciting, Kristina. More proof that our kids keep on learning, at their own pace. Every new word is definitely a cause for celebration.

I get a fair number of directions from the back seat - usually "this way" with pointing. When I explain I can't see I get "left" or "right". Unfortunately, there's not too often that I've got the free time to drive in the wrong direction. Sometimes there are specific places he's got in mind, other times I think he'd rather explore than go home.

When we're walking, I try to let him choose directions, but sadly there are some rather dicey neighborhoods in walking distance that I'd prefer to avoid, expecially with an unpredicatable autistic 10yo walking with me. On the whole though, I know he has a great sense of direction ,a photographic memory of images and a strong desire to explore. Charlie sounds very similar in this respect.

Clara Park, in her books about her autistic daughter, remarked on her child's remarkable sense of direction and memory.
Is Charlie able to write? Some people who don't do well with speech communicate much better in writing.

Long before he could talk, Buddy Boy would get all excited in the back seat when he was 18 mos. old and we passed the Chinese take out place that we went to each weekend. He could identify it coming from either direction, sitting set back in a non-descript strip mall.

He also relates distinct memories of my wife's car that she sold when he was two.

@Monica, We took one of Charlie's Xmas card photos by the bridge wall (I think it's the wall of a bridge; is it the Selby Ave bridge, I must go back to check!) that has the names of railroads (Union Pacific) inscribed on it. We went for a lot of walks over there---Charlie actually learned how to walk in the little playground off of Selby.

Charlie hasn't shown any inclination towards maps (he doesn't write beyond copying words---but one never knows).

It's often things from his youngest days that Charlie seems to remember best---so I also need to check the geography in Kirkwood, Missouri (site of his very first walks in a stroller, pushed by Jim) and in University City, Missouri (site of his babyhood; many walks with both of us, me with him in a babycarrier).

There are autistic people that claim memories way, way back. At 7 G definately still has memories of places, people, and events back to at least age 2.

My wife has memories of Yugoslavia and she moved when she was 3. This includes a memory that can be hard dated to about 18 months because the event was memorable to her parents, her falling down stairs.

It has been theorized that access to early memories is stratified by language development in the brain, that recalling early memories are difficult for some because they are stored in fundementally different primatives that don't make sense to our conscious thought because our brains became changed as we adapted to English (or another language).

When language development proceeds differently (my wife was very adept at language at a very young age) this might lead to different results?

Nick is into maps and I recall reading in MAAP that this is common for kids with autism in his age range. He likes to study the online maps for all the Zoos and wonder why they put some animal in a certain space. He has created his own maps also. NIce look on Charlie's face.

Google Earth on the IPod touch is a favorite at our house. Ru's not into people looking over his shoulder or asking him questions, but I think he's visually flown from Baltimore to Coral Gables (where my Dad lives and we fly to every couple of years).

Charlie's expression in the above photo reminds me of a former student when I was teaching in a school for autistic kids. The young man was about Charlie's age and he was a very talented artist. Some of his portraits were displayed at shows of "outsider art."
Anyway, the young man had a habit of glancing at people out of the corner of his eyes. He rarely met anyone's gaze directly, instead he preferred the sideways glance.
Despite not looking at anyone head-on, he produced some excellent likenesses in crayon and pastels. I wonder if looking directly at faces was too overwhelming for him. All those moving parts-- eyes, teeth, eyebrows and chin shifting and changing seemed to be too much for him to process.

Hey Kristina, OT, but you have to love the moustache.... Mine has had one since about the same age. Now he obsesses about his Sideburns....!!! ;D