The End and Some Beginnings 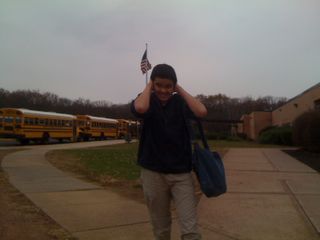 Gently, gently. Keeping things at about that level, at that quiet tone, has been---as Jim and I learned last summer---essential to helping Charlie get through the days with minimal, if any, neurological storms. It's not only a matter of avoiding situations where there could be loud noises, or people having contentious verbal exchanges, or glaring fluorescent lights (though we don't exactly go out of our way to find such situations to plunk Charlie into). Thursday night's evening in Jersey City was pretty much rife with all three of those over-stimulating stimuli (not to mention a couple of police cars and a fire truck or two, and random rude cars honking us). Over the past couple of months, Jim and I have been mustering ourselves to maintain a core of "peaceful easy-feelingness" in ourselves no matter what happens: Major traffic snarls. A very upset boy in the back seat of the car or at the supermarket. Way too much trouble with our school district duly chronicled here, here, here, here, and for most of the time I've been blogging again in this space. Friday was Charlie's last day at his now former public middle school and so far so uneventful. Jim dropped him off (and was met by the classroom staff bearing the microwave oven we donated last year and a bag of Charlie's things). The plan was for Jim to get Charlie around 10am and take him to visit his new school during the daytime, but somehow that got nixed: His teacher sent me an email Friday morning that he would be "confused" to go there and come back to the middle school. I had informed her of the plan to have Charlie visit the new school several days before and it's not that everything that's been going on hasn't already been thoroughly confusing to Charlie! Anyways, whatever. Jim dropped off the short document I'd put together and called "About Charlie Fisher" to the director. He picked up Charlie in the early afternoon, they went to McDonald's and then out for a bike ride as I was walking back from the train. I'll be taking the train more to work now, with Charlie starting at the new school on Monday. The new school starts at 8.45am, vs. 7.45am at the middle school. We think this should be good for Charlie who continues to struggle to get moving in the morning, though the change in school start times creates an immediate problem for Jim and me, as we both have morning classes (my first class three days a week is at 9am; Charlie's school is some 40 minutes from I work). So for the remainder of the semester, Jim will drive Charlie most days, drive to Jersey City and leave the car in a parking lot at my college, and head to Manhattan. Charlie's school will now end at 2.45pm so I'll have a whole extra 45 minutes a day to get some things done in my office (and a lot can be achieved in an 45 extra minutes, let me tell you). Come the spring semester, Jim's classes all start later so he can drop Charlie off without having to rush so much to get to class. It's a bit of a reversal. For much of Charlie's school life, I've been the dropper-off and pick-up-er. That's as it should be, as Jim used to teach all of his classes at his university's campus in the Bronx, plus he had a lot more administrative duties. With his book done, Jim's been glad to be able to be the one picking up Charlie. And I, well, having an extra 45 minutes, even an extra 1/2 hour, sitting in my office or on the train to grade and answer student emails and address numerous tasks that have been in the "to do" pile for a really really long time---it's a small, fine thing. Little changes and, ok, one big one too: It adds up to significant differences for one still tight team of three.

In recognition of which, after visiting Jim's mother at the nursing home, we went to Charlie's favorite Vietnamese restaurant, where the summer rolls are alway---like a certain boy we know---just too good.

Hopefully, he'll enjoy the new school and settle in quickly.

They wanted to wean my little one into Kindergarten and I said "No". He'd been in daycare and other programs. He cried the first day and was finished before I'd left the building. Before the end of the week he was on the bus.

They are resiliant, and quite often adapt faster than we do.

a) you didn't ask for the microwave back, which makes them now look rather tacky giving it back without discussing it with you, and

b) they didn't bother to clean it.

Good luck and well wishes for the transition and new school.

What Joe said about the microwave.

I hope this is a wild success for Charlie.

I'm betting the later start, all on its own, will have benefits.

Hoping the transition is as smooth as can be. I'll be sending positive thoughts and warm fuzzies your way.

Joe knows...... am going to be fully honest. We decided that. due to what happened with Charlie's iPod, it might be best for things from his previous classroom to follow him home or to his new classroom. The clothes were extras and old and the microwave too, and they have been donated and hopefully will find a good home.

I'm betting the later start, all on its own, will have benefits.

The biggest incongruity of the teenage years is just as kids are going through a stage where they need more sleep, and their natural rhythm starts later in the day, their schools usually have them start even earlier than they did when they were younger.

The later start may indeed be a "little" thing that pays great benefits.

Thinking about you, Jim, and esp. Charlie - sending best wishes for a smooth transition to the new school and much better times coming.

'Also see the later start time as a potential plus (in my experience, growing teens like and need their sleep!)

I somehow missed what happened with the iPod.

The school I went to in TX started the little ones earlier and the older ones later. Here in MI, the explanation I received for the opposite, is older kids have more after school activities, and they don't want them out too late after school. I would not be surprised if the real reason is the need to cover after school care for the little ones.

younger students, also, technically need more sleep, but I did find it odd, as well, that they abruptly change the time kids have to be at school for middle school.

High school starts even earlier in our town---7 or 7.30am or thereabouts. Charlie used to start school at 9am when he was in elementary though.