The Limits of ABA 2: Keeping it Fun and Flexible 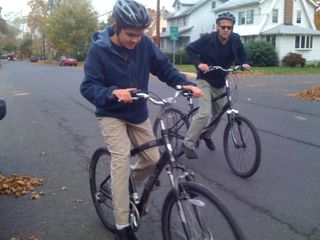 I noted we had a lovely Sunday---actually, the whole weekend was lovely. After the previous week's really rough Sunday and then last Monday when Charlie was in a crisis situation due to extreme anxiety over his pending transition to the big autism center, Halloween passed quite pleasantly. We were more worried about Sunday, especially as one of the last things Charlie said on Saturday night was "school tomorrow." He actually has a quite strong sense of the weekdays vs. the weekend, and we suspected this statement attested further to his recent heightened anxiety.

Sure enough, Charlie awoke at 6.15am on Sunday and wanted to get dressed. Fortunately, we'd all had an extra hour of sleep thanks to the return to regular time. Charlie got briefly over-anxious and Jim hurried to where he was in the kitchen, and I got Charlie's clothes and started puttering around. Charlie set himself to pacing and pulling on his worry beads and told us he wanted to be left alone. I decided to stick to a part of my routine---a morning run---and Jim waved me off. When I returned, it was to two guys hoisting themselves onto their bikes.

Jim called me after 20 minutes: They'd met a couple of dogs and Charlie had been crying the whole ride. I met them at the bagel store where, though it was bit chilly but we still sat outside and Charlie enjoyed two "mishmash" bagels (don't worry, he's not overdoing the gluten, he mostly gnaws away at the outsides for the seeds). Yes, this is the same bagel store where a sudden neurological storm overcame Charlie last Sunday and the owner and a worker had to help me. Jim and I wanted to be able to go back with Charlie, albeit in a different way than before. The bagel store isn't that big and Sunday morning it's always packed, especially in the back where there's a carry-out line. Jim and I decided to take the path of least resistance: Jim waited with Charlie at an outside table, and I got the bagels. We've tended to avoid those "paths of least resistance" over the years, in favor of "pushing" Charlie. The intense, highly structured ABA program in our school district---like (some, not all) other private ABA schools and programs---takes more of the position that if there's resistance, we've got to work on that and, too, work against it.

This is most apparent in regard to a "problem behavior" like stimming or self-stimulatory behavior. Jim and I have come to see these as self-regulatory and self-calming mechanisms or actions that, in Charlie's case, help him to process sensory data and to soothe himself. Most of the ABA programs that Charlie has been in over the years have called for "extinguishing" and/or "redirecting" such "problem behaviors" (which, compared to some of the things Charlie can do, are no problem at all). We've generally found that the more we've tried to prevent, stop, block, stimming, the more Charlie does it. Obviously a behavior like head-banging can't just be "let be," but humming and stomping and the occasional twirl serve their purposes for Charlie. I'm still processing all the comments from yesterday's post on The Limits of ABA. (I'm also trying to prepare a class on the ancient Olympic Games and the Persian Wars--something called the hoplitodromos ties them together---for Tuesday morning; will be responding about ABA more fully as the week unfolds). Teaching Charlie is a topic near and dear to all of our efforts to help him live in the world; it's all about not only how to teach him, but how to be with him. We're not "giving up" on ABA entirely: Teaching at the new center that Charlie is going to is based on ABA (and, to some extent, as Emma and others pointed out yesterday, there's some "behaviorism" at the basis of all teaching: Would my students keep learning more Latin grammar, more declensions and verb tenses, just for the love of it, or for the grades and their GPA?). And Jim and I very much want to have Charlie's former Lovaas consultant observing him regularly. That consultant oversaw Charlie's home program back in 2005-2007 and the two words that came up again and again in conversations with her were "fun" and "flexible." We worked through stimming rather than seeking to "extinguish" it and when Charlie struggled, she always directed the therapists and us to look at how we were teaching and if we were really motivating Charlie. That is, we did our best to make our teaching "fit" Charlie, rather than the reverse.

Reflecting on this, and not wanting to revert to  be in "hide in the house stay only in the usual neighborhood places due to potential crisis situations" mode, Charlie and I went to meet Jim in Hoboken on Sunday night. Jim was speaking at 4pm at the Hoboken Museum and how we wanted to be there in what was (Jim reported) a packed room! But just getting to Hoboken seemed that it would be enough, and so, after gassing up the car, Charlie and I got on the Garden State Parkway and took the Pulaski Skyway to the end, and made the left turn to the Mile Square City. We turned onto Washington Avenue and drove through pretty much most of Hoboken and snagged a parking place (only half-painted yellow) a block from the museum, where we waited at least a half-hour till I contacted Jim on his phone and he emerged from the museum.

Charlie had been requesting "spring rolls" and I'd found an Asian fusion sort of restaurant in Hoboken that made them and we went there afterwards. It was all new. This restaurant was a bit more upscale than the places we usually go to and the summer rolls came out artfully arranged on a ceramic plate. Charlie quickly ate them and then poked at the vermicelli noodles he usually wolfs down; he had some of my Thai noodles, a few more pokes of his, and then asked for his coat, and to the car we went. Once home, after a shower and donning his pajamas, Charlie headed for the refrigerator. Before too long, about half of its contents (leftovers of a noodle sort, watermelon, soy ice cream, frozen edamame, a condiment or two) and a few things from the cupboard (saltines) were arrayed on the table and counters and more or less eaten. That growing boy thing, I guess you could say.

A growing boy needs an educational program that can grow with him and his changing needs.

Little boy is currently stimming on the living room floor. It's getting a little excessive and I'll ask him to sit in a moment if he can't settle down... Nope.. did it himself. Had he been handwringing I would have stopped that ASAP, his damaging his left hand fingers... Otherwise for a short time we need to spin, flap, and get the sillies out. I don't stop the echolalia either unless we are talking. Otherwise, he's IMO "playing" and I leave him to it.

These stims took over at the end of the last school year. Adderall made them worse, Risperdal has taken the edge off. They still exist, they are still necessary, except for the handwringing and his older bro's headbanging, they harm no one. The vocal noise is dealt with using a "shhhhh" if it gets excessive and interrupts. He knows, he quiets, he still stims.

The stim is necessary, but not always appropriate. We're working on giving him both - the stim and knowing when it's not appropriate. At school they take him to the gym for breaks, at home... he's left to play as he wishes.

We let TH stim unless it's a situation in which he needs to learn to control it a bit because it disturbs others--situations in which quiet is the order of the day (which for us are pretty few and far between). He's usually OK with shutting them down temporarily (they come flying out later and then some), although sometimes he just can't. We've never tried to "extinguish" them, just to teach him about when they're not appropriate and to let him cut loose when they're just fine (car, home, outside, etc.).

We've never tried ABA per se, but we've always pushed TH, pushed through some of his resistances, his anxiety, just to show him that there's still daylight on the other side. I guess that's a sort of ABA. At least, we've done the "behavioral" part.

"necessary, but not always appropriate" --- think this would be a good point to start with in regard to stimming in general.

Sometimes you get odd looks. We had been in the waiting of G's new Dr. for a good while and he was obviously getting amped, and chest hugs/squeezes weren't enough. So I told it was OK to do a headstand in his chair. He's getting much better form at keeping his legs straight up from all the practice he gets. :)

Headstands are his nuclear stim option right now, especially self administered stim. His school has a semi-cubicle corner in the classroom across the hall with a bean and other stuff in it where he can go. He's down to once a week or two right now, which is good.

P.S. He does a LOT more headstanding at home, just unwinding for the day.

Now you're making me wonder if Charlie might enjoy doing headstands---deep pressure on his head---when he was younger, he used to think it was funny to slide off the couch and end up with the top of his head on the floor.

It isn't just pressure pushing the head towards the spine, though deep compresion is something that generally works for G. Do a headstand for a while and the blood pushes from the inside out, too.

G started with us , and aids, helping him out. He even liked getting carried around by his ankles (I'm guessing not even Jim would be able to do that with Charlie now :) ), which is why I suspect it's at least partially the headrush of blood. Then he graduated to walking his feet up against the wall and keeping them there. Almost always on a pillow, cushion, or his bed's mattress to keep the pressure more evenly distributed.

It took some time to be able to keep fairly well balanced. He still does it near something to help stablize, sometimes holding onto things with his hands for a broader more stable base, since he'll stay upside down for so long.

Headstands - I think I read about the benefits of headstands in The Out of Sync Child? Dimitri still thinks it's funny to slide of the sofa and land on his head, and loved being carried around upside down, although I'm no longer able to do that!

I tend to stim when I'm too happy to contain myself or annoyed or freaked out. Like if my foot is being branded with liquid nitrogen and it HURTS or if I see a dead animal.

I hope you can find a program that will fit him...