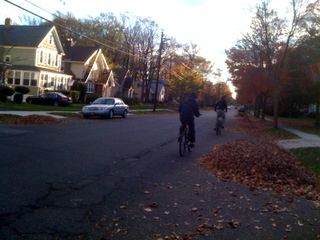 At any one time Charlie only seems to have so many words consciously at his command. He's still been saying "loose tooth, it's stuck" and, while a tooth (a loose one, that is) has yet to be found, he has been pushing at something on his lower right gum with his tongue. Occasionally he'd been prodding it with a finger and there have been very sudden, and very intense, crying jags (like the one Friday when Charlie, home with Jim for the day, returned from lunch and a ride in the black car with his head in his hands). But however minimal Charlie's language is, Jim and I know he's communicating plenty. Jim as a strong intuitive feel for Charlie's moods and responses to things around him and I'm a translator and a teacher of foreign languages. I do, it's true, teach and translate "dead languages"---ancient Greek and Latin. Spending so much time trying to instruct students in languages from a culture and time so far away from their own teaches one about how a language is so much more than just vocabulary words and grammar.  With ancient Greek and Latin, I've only got the words to go by. I've no sense of the ancient Athenians' and Romans' intonations, or what sorts of body language and gestures they used, of how they pronounced their vowels. Dictionaries and grammars and all manner of reference books have long been my good friends to understand ancient languages; these have made it again and again clear to me, that rarely does any word mean just one thing. Quite a while ago I compared understanding Charlie's fragmentary speech to the painstaking work of translating a fragment of ancient Greek poetry, and that metaphor still guides my attempts (for attempts they are) to understand him.I was 13 when I started studying Latin, 14 when I began Greek. Everything I know about these languages has been the effort of sustained, determined, and midnight-oil-burning study. Learning Charlie's ways of communication has been a full-time immersion experience, since I felt my big little guy first stirring in me (that would have been around 12 years ago, it occurs to me; Charlie's birthday is in May). A newly published study notes this about how a baby starts learning language while still in the womb:

Human fetuses are able to memorize sounds from the external world by the last trimester of pregnancy, with a particular sensitivity to melody contour in both music and language, earlier studies showed. Newborns prefer their mother's voice over other voices and perceive the emotional content of messages conveyed via intonation contours in maternal speech (a.k.a. "motherese"). Their perceptual preference for the surrounding language and their ability to distinguish between different languages and pitch changes are based primarily on melody. Although prenatal exposure to native language was known to influence newborns' perception, scientists had thought that the surrounding language affected sound production much later, the researchers said. It now appears that isn't so. [A] team [led by Kathleen Wermke of the University of Würzburg in Germany] recorded and analyzed the cries of 60 healthy newborns, 30 born into French-speaking families and 30 born into German-speaking families, when they were three to five days old. That analysis revealed clear differences in the shape of the newborns' cry melodies, based on their mother tongue. Specifically, French newborns tend to cry with a rising melody contour, whereas German newborns seem to prefer a falling melody contour in their crying. Those patterns are consistent with characteristic differences between the two languages, Wermke said.

It was some time ago that Jim and I realized that Charlie listens as much to the pitch, melody and tone of human voices as much as our words. Jim and I are big talkers; highly unlikely that Charlie was unfamiliar with the sounds and rhythms of our voices, and our joint communication, by the time he was born. And, another study notes that learning to talk change how we hear speech:

As a child learns to talk, or an adult learns a new language, [David J. Ostry, a senior scientist at Haskins Laboratories and professor of psychology at McGill University] explained, a growing mastery of oral fluency is matched by an increase in the ability to distinguish different speech sounds. While these abilities may develop in isolation, it is possible that learning to talk also changes the way we hear speech sounds.

Whether or Charlie would have been able to talk at all without the years of speech therapy and ABA teaching he's had, we can't really know. He was 3 years old when he first learned to sign a little and then to ask for things in word approximations; it wasn't until Charlie was 8 or 9 that he could say most syllables and sounds clearly. Talking has been a long hard journey for Charlie and Jim and I more and more emphasize that it's communication that is the main thing with Charlie; that it's all about him being able to express himself, and if he does so in non-verbal ways (that don't involve super major neurological storm excitement), so be it. Nonetheless, living with two big talkers, it's not surprising that Charlie wants to communicate a lot and often. And, too, that he certainly tries to talk a lot, or at least to vocalize and use his voice, if not always in words, or what are readily recognizable words. Teaching Charlie to look at us and imitate what we were doing was one of the first things he was taught when he started doing ABA at just over the age of 2. While imitation---modeling how to do something---has proved a powerful tool in teaching Charlie, it's also had the side-effect, of Charlie enjoying imitating others and doing what we're doing (like talking); of joining in. "Use the mouse" was what Charlie said to me last night. He didn't fully articulate the final /s/ sounds on "use" and "mouse" and repeated his phrase when I looked at him quizzically. He'd been wanting me to put a CD into the CD/DVD slot of an old iMac; I had told him that computer was "broken" as someone (ahem,) had attempted to put a CD in the slot when there was already a CD in there and things had gotten stuck. "Broken," said Charlie. A pause, and he smiled. I concurred, the computer was broken (and we should get rid of it, but Charlie does get attached to old things). He said "broken" a couple times more and took the CD and its case and asked for the CD player instead. Charlie listened to the CD (the four Australian guys) and took it out when some song came on that he not like. He asked me for "Disney" and---after telling me to scram---listened to that CD's songs from the likes of Tarzan, Mulan, Hercules (that Meg!), The Lion King, Toy Story, Pocohantas, Beauty and the Beast. Hearing quiet in his room, I went to turn out the lights and saw the CD player and two CD cases carefully arrayed.

In past years, just the word "broken" would vex him no end, as Charlie sensed the disorder and loss and "not being able to put it back together again"-ness implied in "broken." But now---knowing he can survive such catastrophes---the word seems to make him, indeed, smile, as Charlie recalls how upset he used to get, but not (at least last night) anymore.

A (and I when I was little) struggles with pronouncing and forming sounds- basically articulation. I was in speech therapy until I dropped out in 7th grade to work on my articulation- neither A nor I have every struggled with expressive speech. C, since the day he was born, has been able to say every sound perfectly in speech- he just struggled with the expressive speech, and until about 6 months ago spoke almost exclusively in echolaic scripts he picked up from us or from TV ("Hi, my name is C, what is your name?" "visit pbskids.org" "do you like my haircut?" "I LOVE your outfit" "I smell your feet!").

I would imagine, struggling with both articulation AND expressive speech would be quite frustrating.

He's still talking about his tooth? Are you going to take him to the dentist? It could be an impacted twelve year molar; sometimes the pain travels to another part of the mouth or in some cases, the shoulder.

Dentist notified; taking Charlie to the dentist is a pretty big deal so we'll see. Charlie though could be talking about things for some time after they've actually occurred...... he still frequently talks about "Barney videos" though it was years ago that we had these!

@Nicole, yes, it's a pretty frustrating combination; calls for us to reach out even more (we think).