A Clean Bill of Health 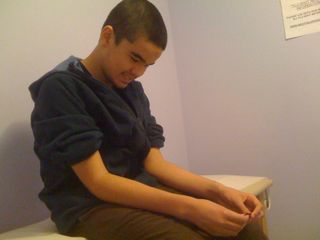 Charlie had a physical Tuesday afternoon. We've been taking him to the same pediatrics practice for the past six or so years. I don't know why but almost every time we've gone to a doctor someone we know has recommended, it's never worked out (and one of the people who recommended a particular pediatrician was the parent of an autistic child). I chose the current practice because there's a couple of pediatricians who are part of it, it has walk-in hours in the morning if you're trying to figure out if your child has the sniffles or a verifiable cold and you'll need to take the day off from work, and it has an easy-to-get-to location (but, alas, a quite small and hard-to-maneuver-in parking lot).

Fortunately I have become better at parking the car over the past six years. Nothing like having a (1) sick child or (2) a nervous child because you're going to see the doctor and sit in a cluttered waiting room for 30 minutes before going to sit in a tiny exam room for 15 more and then comes the check-up---and getting him (and yourself) more agitated because there's no parking anywhere near, and the practice is located on a fairly busy street.

I know parking the car is a minor detail (and most of you who are reading this probably don't give it all the thought I am here). In going through the daily rounds with Charlie, often it's been those small features of every day life that become especially challenging. Necessity being the mother of invention, when the small detail must be done to get something else done for Charlie, I've steeled myself to do it, all while wishing we had a much smaller car and knowing we're not going to, as Charlie needs his legroom in the backseat.

He's just a quarter inch shy of being 5' 7", we found out today. At first I thought we'd have to forego measuring Charlie as, after a nurse had coaxed him to stand against the wall with his head beneath the measuring stick and feet together, he slid away and said "no, no" about doing that again. I suggested waiting till later to measure him and we went into the exam room. The nurse wanted to take Charlie's blood pressure but he has not been wanting to take off his jacket; I recalled how an attempt to have him to do this for the nurse at his new school had resulted in him becoming very upset and asked if we could wait on that too.

The nurse practitioner came in. We've taken Charlie to see her for the past couple of years after meeting all the doctors in the practice and she's been patient and very respectful of Charlie and his sensitivities. When Charlie received a number of vaccines a couple of years ago (these were the vaccines that he should have received when he was 5 but had not), she started asking me if I had concerns about the MMR or vaccines in general. I assured her that we had none, but really appreciated her asking.

She showed the same informed respect and compassion throughout yesterday's physical. She first asked me about Charlie's school placement; she remembered that we had moved specifically to have Charlie going to our town's public school autism program, and frowned when I told her about the past year. She was of course glad to hear that Charlie seems so far to be doing well at his new school, though regretting that his chances for social interactions with other children are much lessened (I did point out to her that his old public middle school did not make any such opportunities available). She wanted to try to measure his height again, but agreed to wait till the end of the appointment.

It all went very smoothly. She checked Charlie's eyes and ears, listened to him with the stethoscope (that made him giggle---guess he's still ticklish). She asked Charlie to take off his shoes and jacket and he did, and let himself be measure, weighed, and have his blood pressure taken. At that point, the nurse practitioner noted that Charlie needed two vaccinations (tetanus and Hepatitis A). I said sure, mentally noting that if it didn't happen, we could come back---a far real change of attitude from when Charlie was younger and the thought of having to bring him back to the doctor evoked plenty of panic. She brought in the two syringes, I touched more than held Charlie's hands. He didn't flinch at the first vaccine (the nurse practitioner is very fast) and then said "no" and pulled away his arm for the second. I placed my fingertips very gently on his and before we knew it, the nurse practitioner had administered the vaccine and we went out to the white car.

Which I had parallel parked a few feet away, in front of the doctor's office.

I have to giggle because our pediatrician--who I love for many of the same reasons you love yours--has the teeniest parking lot (but in Queens, the fact that they even have a parking lot is a huge selling point) and one that causes all of us anxiety and frustration. It's common for the cars to double park in the lot, which means a lot of sitting in the car on the cell phone calling the receptionist to ask the owner of the black Mazda to please come out and move their car.

Regardless, three cheers for Charlie and a great check up!!

Glad it went so smoothly! And so glad you have found someone who treats Charlie so respectfully.

I can completely relate to the parking lot issue. Pete gets very agitated when we can't find parking easily (and I do too, which I'm sure is part of the problem, he reads me like a book). When Pete was a baby, we lived in San Francisco and going to the pediatrician was a huge ordeal because of the teeny-tiny, hard to maneouver parking lot. What a relief to move to a suburb with parking galore.

Oh what a different world this would be if we had more people like that nurse practitioner!

It all comes down to the trust in a relationship, doesn't it? Clearly, Charlie knows and appreciates that the NP is respectful of his space and desires/needs and trusts her. Ni amount of parking hassle can ocerride that gem!

I'd made a mental note to say Charlie seems to have sprouted another couple of inches then I got to the bit where he is nearly 5'7"! He is really handsome, and with all the biking and running becoming quite athletic.

Minor details can turn out to be very important!

@kristen, our pediatricians' practice is located in two buildings, the main one being an old Victorian sort of house. You have to drive down a narrow driveway to get to the lot----and we can only use one-half of the space, as a sign predicts dire consequences if we use the other half (parking for the residents of the neighboring building). The other building (another former house) has a sign in front saying that parking is on the street! And both buildings are always busy......and there was a time when Charlie insisted on being near the car when we had a long wait so I had to try my best to get a place in front of the practice.....

@emma, picky diet or not, this boy just keeps growing!