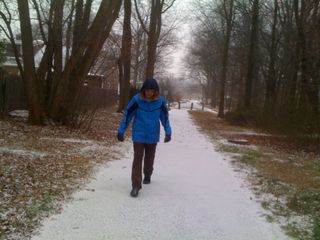 A big snow was predicted on Saturday and, by Walk #1 in the early afternoon, the flakes were coming down.

Wary of "cooped inside syndrome," we went on a family Target trip that became Jim and Charlie dropping me off and getting sodas while I did super-speed shopping. The main thing I had to get was a scraper for the car (ours having mysteriously disappeared over the summer) but all I could find was a 99 cents chipper. Apparently most north central Jerseyans have a little more foresight than us.

Charlie got a little stir-crazy when we came back. He'd requested a ride in the white car first thing in the morning and we obliged with an attempt to visit the bagel store (aborted as the line was almost out the door) and then a trip to see Jim's mother in the nursing home. But one can only go on so many rides, especially with snow falling.

There was yowling and unhappiness, but nothing like last summer's sometimes seemingly endless bouts of crying and knocking and struggle. Charlie went to his room. After about 15 minutes we heard bumps and scrapes that meant that some things were getting moved around. 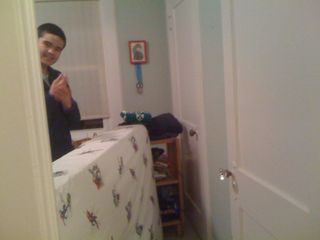 The box spring and metal frame followed (with some Dad Assistance). Charlie rearranged his things in the now-bedless room, leaving a few in another bedroom where there just so happens to be a queen-size bed we've been telling Charlie is his to sleep in for a few months. For all of his 5' 7"-ness, Charlie's been sleeping in a single bed of the same size he's had since he said good-bye to his crib before his second birthday. As you may imagine, he's now pretty much as tall/long as the bed (if not taller/longer), which must have also been feeling narrower and narrower to him.

Give a boy a little time and space, mix in a wintry December afternoon, and you get to see just how much he's growing up.

And a (much snowier) Walk #2 that is, in the words of Jim, "joy and perfection." 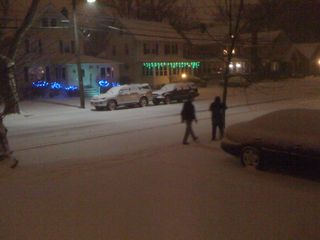 Way to go Charlie...when I'm going stir-crazy I rearrange the furniture too :-)

I love the expression on his face in the mattress photo!

I am always taken aback by the dazzling joy of Charlie's smile. I don't know why. It simply takes my breath away. Almost like I am seeing him in an unguarded moment, perhaps. It is a wonder to behold.

Matt sleeps in a double bed and Nick is in a twin and needs a larger size bed also.

Matt and I have coughs so we have not done any laps around lake this weekend, tomorrow his aide comes over while I go to the gym and he has speech therapy in afternoon so that should be an ok day.

That smile says to me, everything's gonna be all right; everything is all right.