Christmas on the Waterfront

Where else did you think we'd spend it, in the year in which Jim's book came out?

Actually, the day started with a visit to familiar environs. Charlie and I spent the morning making the Tour of his school. Yesterday we just drove around the encircling streets. As we were just about to finish our loop, Charlie told me "this way" and pointed to a windy, hilly road that Jim drives him on when they get to school so early that they have time to kill. It's rather country-esque, with horses and snow-bedecked picket fences (and McMansions, to remind us we're in suburban Jersey). As we went down one dip, Charlie smiled glowingly and I said

and thought, what do you know, I think I just gave Charlie a Christmas present that he really wanted.

He was certainly game for a ride later in the day---Charlie filled the back seat with various items, an old blue fleece blanket, worry beads, CD case, the brown and black (stuffed) dogs---though I'm not sure that Brooklyn was what he had in mind. He wasn't too thrilled when we hit holiday traffic going through Staten Island en route to the Verrazano Bridge. 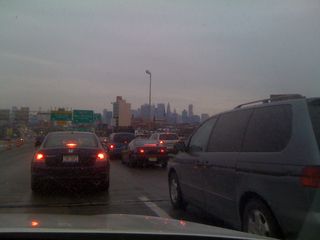 Red Hook in Brooklyn was much more quiet.

Jim's giving a reading at Sunny's on Conover Street in January 2010. 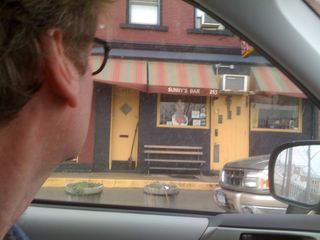 And, he's doing another reading at Rocky Sullivan's too, in February of 2010. 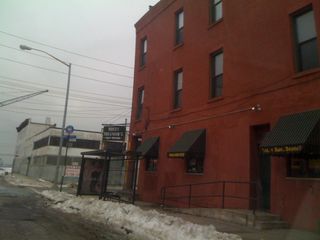 We (literally) bumped around the cobblestone streets checking out the local sites. 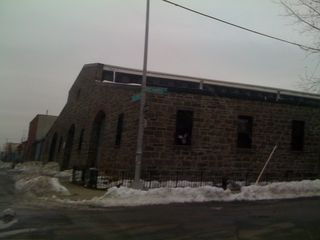 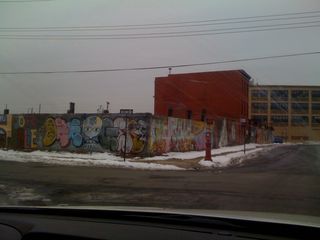 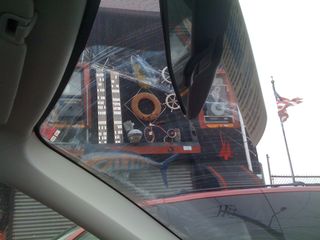 Then onto Sunset Park. 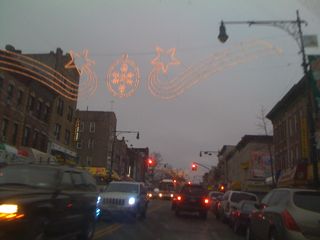 We passed the Jackie Gleason bus depot! (One of these days, I suspect Jim will explain why Jackie and the exclamation point; the blue circle is a sign identifying the depot as such and invokes these buildings and the moon.) 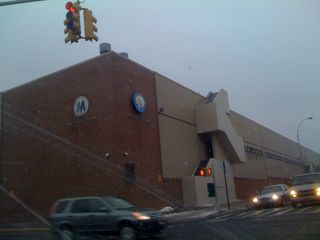 Once upon a time we used to patronize a Vietnamese restaurant in Sunset Park; it's since closed. Some up and down driving by Jim and I spotted a sign saying "Pho." And the place was open. So Jim dropped me off and we got Charlie his favorite summer rolls for the ride back. (This photo of a store's sign (missing one more "z" on the second word) is, obviously, not of the restaurant---Jim dropped me off in the middle of the street and I dashed out---but this song is a favorite of all three of us.) 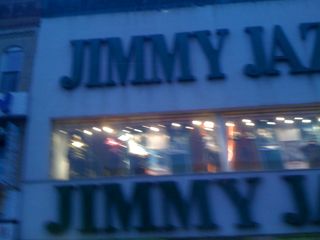 We meant to take the Verrazano Bridge back home. 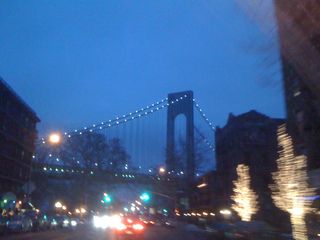 But a fortuitous missing of the entrance ramp resulted in us taking the Brooklyn-Battery Tunnel (first time ever for Charlie and me). 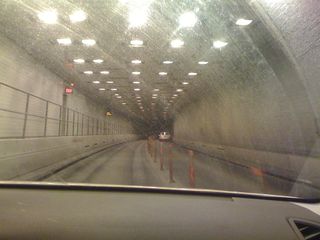 Then a little swing through lower Manhattan and back to the Holland Tunnel. 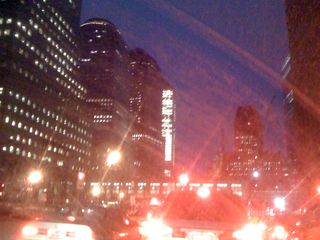 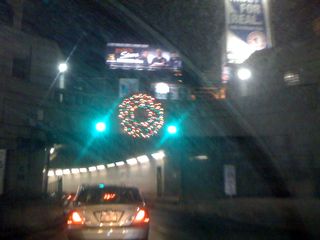 Jim figured the traffic around Rockefeller Center to see the tree would be more of the stop-and-standstill variety, not to Charlie's (or, frankly, our) liking. On holidays, on any day, it's good to stay in motion---just what our Charlie ordered, right? 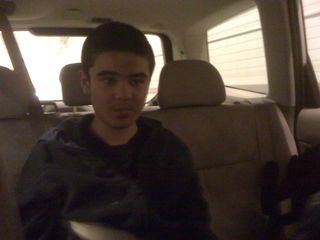 Happy holidays!!
Nice photos, it's quite a surreal view of the world - Dimitri would have loved all those lights, think we need to go for a bit of a road trip too.

Parts of Brooklyn are pretty this time of year. My MIL has a brownstone in Cobble Hill and we frequent the little restaurants around Smith St. The Grocery is one of my favorites.
Does Charlie ever get out an walk around the city? It seems like a shame that he has to be cooped up in the car, especially when NYC is made for walking.
Maybe he'd like the sights and sounds in Chinatown? The Promenade is a good spot for strolling in Brooklyn.

@Jill,
We've taken Charlie walking in Chinatown and on the Promenade and over the Brooklyn Bridge, and up and down the West Side. In the past year, Charlie's sensitivity to sound made walking in the city much less pleasant for him, to the point that he has not been wanting to do it. But it's still be good to see the sights and hope that, someday, we can go walking again. Of late, he seems to prefer the car; Jim and I would certainly like him to get out and walk; again, some day.

In the meantime, am glad for road trips!