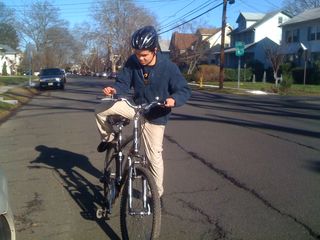 Thanks to everyone for your kind wishes and comments about Charlie and our latest ER experience. The pediatricians' office called us yesterday afternoon to check in on Charlie. I need to stop by there later this week anyways, to get a form from Charlie's school filled out. I'm hopeful that we'll still be able to take him back there; we've already been rethinking our waiting room strategy. (Most likely, we'll have Charlie wait outside or in the car with Jim.)

This latest experience has highlighted some of the challenges of dealing with health problems with Charlie. I don't mean getting EEGs or blood testing, or any of the "health issues" that one might be seeking to "treat" in a child if you're following various "biomedical" protocols. I mean dealing with day-to-day health issues, like cutting fingernails (I stopped trying to do this on a sleeping Charlie when he was 5 and very slowly taught him to let me trim both his finger and toe nails) or removing a splinter (a two-person operation at home; another time, Charlie got one on the sole of his foot, and a doctor from the pediatricians' office removed it). (Yes we have been through many a visit with them.)

One of the hardest things is simply knowing that Charlie has something like a hangnail, a splinter, or a sore in his mouth. When he was about 7, we were flummoxed because Charlie kept saying "pi-ah-pi-ah," and little else. He still let us brush his teeth and ate as usual. Then a speech therapist happened to get a look deep inside his mouth and noted that he had a sore. As it had been some days, there was---as we were horrified to discover --an infection that poor Charlie must have been patiently suffering through. Fortunately, a mixture of maalox and Benadryl applied regularly to the sore (suggested by the doctors' office) led to its going away quickly, and it was "pi-ah-pi-ah" no more.

We only found out that Charlie had bit his mouth on Tuesday because of a note from the school. Again, Charlie's appetite was the same and we didn't note anything amiss until Wednesday, when he started pulling at his lower lip. Still, he looked all right until (of course) Friday---Christmas---morning and then the "excitement" of the day after Christmas in the ER.

Charlie can talk but mostly about (1) things he wants; (2) things that he likes a lot (and often no longer has, like Barney); (3) people he likes a lot. That is, he's not able to use words to describe his interior state, whether physical or mental. If we don't see obvious physical symptoms in Charlie, we pretty much have to go by changes in his behavior and, in particular in self-injurious behaviors> When Charlie was younger, if he fell or even just stubbed a toe, he'd often hit his head---maybe to further "register" that the pain he felt was, indeed, pain. While we're always attentive (all those years of ABA) the "antecedents" of Charlie's behaviors, sometimes it just seems like so many things can be possible "triggers" for a behavior, some more obvious (hearing a fork drop, for instance), some less so.

On Saturday, it rained and rained non-stop---a big change in the barometric pressure from the day before. Even though we spent most of the day inside, the drizzle and downpour were constant and were pretty much insult to injury for Charlie on Saturday morning and throughout the day.

Sunday it was sunny and very mild. The happy result of all of that rain was that most of the snow was melted and so, after a morning car ride and some quiet time in which I read over the social story about being "on vacation" to Charlie, and a number of "no's," Jim got out the bikes for a late December bike ride. Charlie got up from the couch and asked for "helmet," and the had the biggest smile on his face as he took his bike out into the street and ran back and forth. They took the (not so) new urban route and, when Jim ran into a friend, he was able to stop and briefly chat before catching up with Charlie.

The forecast is for back to freezing cold temperatures in the upcoming week which is, of course, also a school-less week. I'm glad Charlie has it off as he's definitely got "something," and both slept in and went to bed early. Jim and I are both off from teaching so we can spend lots of time with him and keep a watch on him---because, really, when it comes to keeping track of Charlie's health, I don't yet know of a substitute for careful, loving vigilance.

good news that you all are on vacation. Hope Charlie sleeps in again.

I'm glad Charlie got a bike ride in, it must have been great after such a difficult time with his lip and the doctors visit.

Doctors, dentists, working out what's wrong and whether you need to go to said doctor - sigh - it's so difficult. Also, it hadn't occured to me but you pointed out how Charlie is often the bigger kid in a room full of toddlers - that's us too:)

Sleep! Best thing for growing boys and tired parents. Hope your week is slow and relaxing.

Is Charlie able to use a doll or a PECS-type board to show you where he feels pain or discomfort?
And how about you? Are you able to use some of your time off to get a haircut or a mani/pedi or just visit with friends? Do you have time alone to do things that are restorative (and not work-related) for yourself?

Henry has more language than Charlie, but is still frustratingly silent about pain/illness. We discovered an infected hangnail last week! All white, swollen, the area around it was red and hot. He had woken in the night with chills- just like he used to when he was a baby and had an ear infection. It was always my ONLY clue.

I'm so sorry about the waiting room incident. Poor Charlie.

Whether PECS or words, what Charlie himself communicates are concrete entities---food, CDs, people. He is, in his way, telling us how he feels; somehow, those methods (PECS, words, etc.) have not been modes of communication that he's been drawn to, as far as expressing emotions.

For the record, I dislike getting haircuts (guess I have my sensory challenges) and the like! Have been working on my translation for the past hour while Charlie's up to something, Jim is visiting his mother: On the one hand, Charlie requires constant and regular supervision, on the other hand, there are many times (especially as he has gotten older, that he _wants_ to be left on his own, and manages well. Thank you for asking---due to our teaching schedules, we are still not back to work when Charlie returns to school next week.

Have yet to find an infected hangnail on Charlie, Gretchen, and no fever, so far----very vigilant about giving him that antibiotic. And vaseline.

@Louise, Still have to go shopping for that---we're slow to get ourselves into the likes of the Sports Authority. But maybe another bike ride in a bit, if the sun keeps shining!

@Emma, Occasionally there is another child (not with a disability) who is Charlie's age in the waiting room---he or she looks just as "out of place"; indeed, he or she often looks like they can't believe they're sitting in a room with all these tiny chairs!