Encounter with a Big Red Dog 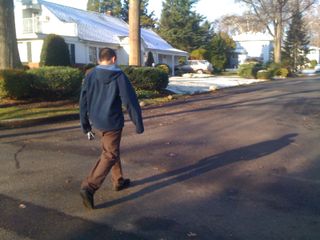 Midway through an afternoon walk, Charlie and I sighted a big dog with long red-gold fur ahead of us. Charlie kept walking, hands over ears and head tilted down. But he was clearly watching the dog. Whenever the dog stopped or sat down, Charlie ran off sideways in the opposite direction, eyes still on it.

(I found this a quite impressive feat, if you consider that Charlie still had his hands more or less over his ears all the while.) Soon as the dog and her or his owner (who didn't seem to be much taller than me) commenced walking, Charlie stopped the sideways trot and walked forward. At a measured pace. And then we turned a corner and it seemed that the dog stopped and sat about ever 10 or 12 feet. Sometimes, the dog appeared to be turning and looking straight at Charlie. I started to suspect that Charlie, with his unflinching attention on the dog and his repeated, rapid, projectile movements could very well have caught the dog's focus. As I stood by him, I noted that, while he was clearly intrigued with the dog, his heart wasn't---as it has in the past---pounding and thumping. While still wary of man's best friend, Charlie was able to regard the big red dog without, it seems, his blood pressure elevating to near-panic levels. Perhaps he's learning to "read" canine body language? (Which would make sense to me as Charlie is very attuned to non-verbal body language in us humans.) Has he figured out that dogs on leashes aren't going to pursue him? The dog never actually moved towards Charlie. It was when the dog stopped moving that Charlie betook himself fast and away, but in a respectful, not entirely terrified, kind of way. Eventually the dog and the woman made a left down a sidestreet. Another woman was standing on her front lawn and she and the dog's owner started talking and that was the first time we heard the loud, deep sound of barking. Without missing a beat, Charlie started walking really really, as in much, faster, straight ahead. One more dog, and his or her owner, crossed paths with us as we were almost home. Charlie was walking at a brisk pace and barely seemed to notice the dog, which was smaller and cream-colored. I nodded a greeting at the owner and followed Charlie. Here's probably as good a place as any to note that the two stuffed animals that Charlie still keeps around are a black Labrador-ish puppy, and (despite years of handling, some of it in watery settings) a pale Golden Retriever-ish pup. Maybe they're not his "bestest friends," but there's some sort of fascination---interest---with dogs going on and as well. Our second walk on Tuesday was in the evening when it was dark. Almost every other walker we met was a dog owner: It Charlie keeps up the routine of walks morning, noon, and night, looks like we'll be having many an encounter of a canine kind.

We've had the same experiences in the past few years with dogs that we don't know ...moving from all-out terror at the sight of a dog, to a kind of wary watchfulness coupled with intense interest. I wonder if it's just an age thing, and that the kids are figuring out that if they've gone 12-14 years without being attacked, there's a good chance that they won't be?

In our case it's been an intense few months as the kids' father got a puppy, so their learning curve about dogs has increased exponentially. I'm glad that we'd moved past the "terror phase" before that happened!

sounds like he's dealing with it very well! We on the other hand are having a camera flash issue as of late, and we seem to encounter flashes just about everywhere we go lately. He too is learning to deal, even if dealing means jamming his face into my arm with his eyes squeezed shut. With age it seems comes adaptability? Hopefully!? Lol

When my little one was small his cousin's puppy discovered the joys of chasing him - they put him in the house but the child has never forgotten. Btwn that and the day he nosedived on my parents dog - sleeping under a blanket on the sofa - he's been wary of dogs. He's not impressed with the bigger dog (sheppard/beagle/mutt they found abandoned in ravine) at my MIL's but she keeps him outside while he's there. He's fine if the dog is on a leash and we go for a walk, it's loose that bothers him. That dog has never harmed my eldest for all their stick chasing and playing... and he's barely been trained. He does leave the younger alone, has never bothered him.

My parents shitzu will sit beside him while he plays but never bothers him. He did bite him the day he jumped on the sofa - bruise mostly - and I don't know who was more upset, the child or the dog when it happened. Neither was to blame for it, it was an accident.

There are just plain mean dogs, but I think many sense something isn't right and at the same time take care of children. My inlaws once had a white sheppard back when the elder was very much "autistic". He could sit on that dog, pull on it... and as soon as she'd had enough she'd knock him gently on his backside and move away.

Personally, I hate dogs of any kind.

I'm surprised by how much kids in general and not just those with special issues seem to be terrified of dogs.
On Halloween, a little boy who looked about six noticed my very placid standard poodle sitting behind the French doors that lead to our vestibule and volunteered that a dog ran out of one of my neighbors' houses while he was trick or treating there.
From the way he described it, he might have been relating an encounter with a great white shark. The dog ran right back in the house but the kid was totally freaked out.
I think the fear of dogs has to do with fewer kids owning dogs nowadays. It seemed like when I was growing up in the 1970s just about every family in my suburban neighborhood had a dog. They were familiar companions and while there were a few notorious "mean dogs" that barked behind fences, most of them were non-threatening.
Today, with both parents working, allergies on the rise and other issues, many kids don't get to experience having a dog for a pet. I think that's a shame, particularly for kids on the spectrum who could use a nonjudgemental buddy.
Is there a therapy dog at Charlie's school? It would be great if there was one just sort of hanging out in the background for him to become familiar with.

@Jill, you're right - it's sad that children have so few opportunities to deal with domesticated animals of all kinds. Did you ever have scary run-ins with neighborhood dogs as a child? Getting bitten, especially by a large dog, sears the knowledge of an atavistic caution into a kid's mind.

Dogs are scary. They have biting teeth and can hurt you. Barking ones seem to be telling you that they are noticing you and don't like you. And the quiet ones can suddenly change their mind and bite you. They obviously are responding to non-verbal cues you are sending - that you aren't even aware of! And grown-ups are always saying, "Don't be scared! They are more likely to bite you if you are scared!" Well, gee, grown-ups, thanks.

Does Charlie get any interaction with a calm, harmless dog - not Aunt's dog? Has he, or does he, have any pets at all?

Charlie may be a cat person. Cats are very non-verbal, and not as needy as dogs. They also don't bite you. Even if they scratch, it's because they have been most provoked, and it's meant to teach you their limits. But they can be excellent, non-demanding companions.

@Bonnie, not much of a flash on my iPhone camera! Learning to deal = at least half the battle@

@Jen, not ready for a puppy here! As I think of it, no dogs have actually jumped on Charlie, he's already running when they head towards him......

@Jill & Louise, Apparently Charlie's school has therapy dogs visit from time to time. I've already been talking with Charlie's teacher about how to address this. Our neighbor recently got a 2 year old dog and I think this might be a good opportunity to get Charlie used to a dog.

@farmwifetwo, am ok myself not to have any pets.... plenty enough going on around here!

Louise--cats certainly can and do bite (sometimes without provocation or warning, especially younger cats who bite when they play). I agree that they're good for spectrumites of all ages (I tend to think having any sort of pet is good for most people, though), but for nervous kids a specific breed may be a better bet than just a shelter cat. Ragdolls, specifically, are the most docile cats imaginable and terribly affectionate--their name is a descriptor of their general placidity (they're also super soft and pretty). I love my shelter kitten, but I was raised with cats by a pair of former cat breeders and one of my early special interests was cats, domestic and wild. I'm equipped to deal with a 9 month old kitten who thinks chewing on me and rabbit kicking are appropriate play activities (he's otherwise very docile and sweet), but I wouldn't necessarily reccomend a shelter cat for every family--unless they are willing to adopt an adult cat, who desperately need homes and are often overlooked because kittens are adorable, but have adult personalities and can be matched well with owners.

Louise: I never had a bad experience with a domesticated dog although a pack of feral dogs chased some college friends and me when we were vacationing in Greece one time. We ducked into a bus shelter that fortunately had a door that could be shut and after a few minutes of barking/growling/scratching at the door they departed.
When I was little my aunt's dog scratched me on the chin. It bled but I didn't need stitches and even at three I knew I got what I deserved because the dog was old and I was pestering him.
Therapy dogs are THE BEST! I think it would be good for Charlie to meet a gentle, quiet dog.