Not Much to Report From a Neurologist's Visit (and that's good) 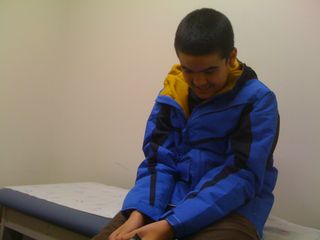 We were a half-hour late for what turned out to be a rather non-eventful neurologist appointment---something I'm taking as a sign of progress.

It was, frankly, nice to be able to report on Charlie doing well at the new school where he's been for not yet 30 days, especially after a summer of "behavior hijinks" that made the 90 minute rides to the neurologist a lot more than anxious for all three of us. Charlie was often in such a state of worry at where we might be going that, more than a few times, he pitched himself out of the backseat. When we once were explaining our frustrations with the school district and, in particular, the inappropriate mention of a "temporary residential placement" for Charlie by his then-teacher, Charlie lunged towards the nurse. Jim held onto him and sat with a weeping boy while I talked in another room to the nurse who---the mother of developmentally disabled daughter who is now deceased---was totally understanding. Plus. Jim and I have come to see that visit back in July as a turning point.

Friday we said "hi" to the nurse and she smiled at Charlie. Charlie sat patiently as Jim and I talked to the doctor and let him examine his eyes and mouth. We agreed to have Charlie continue on an anti-anxiety medication through the holidays; we've been thinking ahead to how he'll do on the 7-hour plane ride and then in California where, on two previous trips, his main interest has been to get back to New Jersey. (We're not planning a very long trip this time.) We do really still need to get the blood testing done; the neurologist referred us to a presentation at October's Autism NJ conference at which a practitioner discussed this very topic (am looking up her name).

In going over the different genetic and other tests the neurologist wants Charlie to have, the topic of testing for celiac disease came up. We noted that Charlie tested for celiac antibodies and was strictly gluten- and casein-free for years, and that he didn't seem to have much, if any, of a noticeable reaction when he started eating wheat a few years ago (he still has no dairy in his diet). And that, as a result of years of never having Ye Typical Sugary Fatty Junk Food Staples of the American Child's Diet---ice cream cones, Twinkies, Goldfish crackers, and the like---Charlie's not very interested in eating any of that stuff.

Jim took the mention of "the special diet" to ask the doctor where he thinks research and treatment of autism is going. The doctor responded that he thinks that there's going to be more of a focus on biological profiling (I suppose with the results of the sorts of testing that we need to get done for Charlie), especially in light of all the discussion and disagreements about the proposed DSM-V revisions regarding autism spectrum disorders and Asperger's Syndrome. Rather than continuing to devote so much effort to define and refine what  "high-functioning autism" and the like are, we need (he noted) to look at how different individuals end up, for different reasons, with an autism spectrum diagnosis.

Back in the car, Jim noted that it'll probably always be a mystery. I talked in my not-exactly but kind of (I hope) accurate way about synapses and neurologins. Charlie told us "I want to eat" and kept his eyes on the road for the McDonald's that we've always stopped at either before or after visiting the neurologist.

I thought about the EMT who, a few months ago, took a call about an autistic child---Charlie---being in severe distress. The EMT's own son is (as he told me) autistic. "He told me 'I want to eat,'" the EMT said of Charlie to me as we stood outside the white car where Charlie sat, his head on his knees. "My boy doesn't talk," the EMT added with a look in the distance.

The EMT had been called because Charlie had had a major anxiety attack in the car that fall evening. He knew he was to leave his old school and start at a new one---Charlie had just visited it the day before---and he was, more than understandably, probably feeling the ground shaking apart and opening up to reveal an endless chasm.

But now Charlie knows where he's standing, where he goes to school, where he is.

I'm glad Charlie had a good visit with the neurologist. Do you think he remembered the nurse that he lunged at during a prior visit? Has he ever physically attacked anyone? A couple of my former students (all teenage boys) were prone to occasional violence toward others. One kid broke my aide's collarbone when he twisted her arm and threw her on the floor.
The student was very verbal but his interests were extremely narrow (one particular TV show and reading telephone books). He had few social skills and was easily frustrated. I often wonder what became of him.
A couple other of my students had no words at all or very few. one boy was only able to say "ears." He'd grab his ears and say "eahs" in a New jersey accent. I know the parents of the kids in my former class were always checking out the other kids, either somewhat enviously because their own child wasn't as advanced or gratefully that their kid was better behaved and had more skills.
Do you and Jim ever get the chance to enjoy an evening out together to see a play or go to a nice restaurant? Is there a babysitter with whom Charlie feels comfortable or do you have a respite provider?

Nice to hear that things are going smoothly for the moment. You all deserve some smooth sailing after the difficulties of the last few months.

@Jill,
Yes, we were able to go out when my parents visited. Charlie definitely remembers the nurse, she gave him a big smile! And I don't think he has a Jersey accent..........

Sometimes I wonder which side you are on, are you the new Bernie Rimland now?

Biomed indeed, it is so Wrong!

@Laurentius-Rex,
I left out the rest of the conversation with the neurologist in which he and Jim talked about what's wrong with biomedical treatments and a critique of chelation, HBOT, and the like.