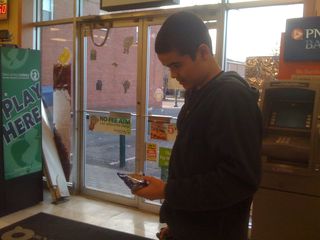 Charlie had a good day at school on Tuesday and was amenable to playing a little piano and watching some videos I thought would be good (i.e., videos he could have done without, like this), and assented to a brisk walk that involved slipping over ice and breaking a path through a snowy field. So I could hardly say anything but "yes" when he asked for his favorite Chinese take-out noodles. Jim was working late in his office so a car ride seemed a good idea to pass some time.

Motion suits Charlie. He's not hyper---not a fidgeter or leg-shaker in his chair---but he does like to get up and get out at regular intervals. We've always thought this urge to be in motion is at the root of Charlie's deep affinity with the ocean.  (Indeed, his need to do this to help keep his anxiety and the behaviors resulting from it in check is the main reason we cancelled our trip to California---we would have been airborne this morning and, while the plane of course is moving, Charlie would not have been able to.)

It being just a few days before Christmas, it did not take us long to encounter many cars in places where we usually just drive right through. We stopped and started and jerked and stopped again in the traffic. Charlie was quiet, with his eyes open wide and his facial expression consternated. Sometimes we didn't move at all on streets that we usually breeze past. We went round a bend (slowly) and beheld a snaking stream of white headlights: Traffic was even worse going the opposite direction and we'd for sure be sitting in it on our return trip.

We got on the highway and were soon at the restaurant. I know, I know, it's an overly long drive just to get noodles, but I'm coming to suspect that the ride and the tour of familiar sites is at least one reason Charlie had made his request. The front entrance of the restaurant was buzzing with families and packs of what looked like college students home for the holidays. Charlie usually likes to linger and look around, but last night he was in and out the glass door.

We drove off and after about 12 minutes I told Charlie that, since there was so much traffic, we'd try an alternate route. It meant getting off at a different exit and making some extra turns on a winding road, and it was well worth it as we turned onto a main road and saw a long line of cars to our right.

Fatal because, a few months ago when Charlie was having one anxiety-based neurological storm after the next, this particular road led us past a certain street where  some two policemen a couple of EMTs, some kindly passers-by, and I all had all been standing around Charlie, who'd just gotten through a neurological storm that was, how to put it, hurricane level. As I stood shakily answering the EMTs' questions, I remember thinking this might be the end of everything, people will tell me Charlie can't be with us anymore. Both beyond shaken, Charlie clutching his green worry beads, we made our way home.

After that night Jim and I had agreed, we're not driving Charlie by there. Indeed, a couple of years ago, he'd also gotten very upset in the car, at almost that exact place. I had thought he was "over" that, but---after that October evening--I knew he was not.

So last night as we neared The Spot (we've yet to determine why Charlie's gotten so upset at it), I found myself saying "Well here we are." A glance in the rear view mirror revealed Charlie sitting bent forward a bit, attentive but not tense. I kept driving and he asked for a Sprite. There's a Quick Chek just near The Spot and, peaceful easy-feelingness being the mood from the backseat and so in the car, I said, still with my guard up, "sure." We parked, got out, got the soda (ok, it was a Sierra Mist but better than the diet Mountain Dew Charlie sometimes grabs---because it's in a green container---and drinks very little of). Got back in the car, drove without further ado past The Spot.

A few blocks after, I looked up to find a sign saying Seneca Road.

Seneca as in Seneca the Younger, the Roman Stoic philosopher who was tutor, speech writer, and confidante of the Emperor Nero but then fell into said Emperor's displeasure.  Just another of those ancients I prattle about from time to time here.

Seneca as in the author of the tragedy of Phaedra that I had spent Tuesday morning starting to translate with an eye towards a possible book-length project.

And there Charlie (drinking his Sierra Mist, having opened it with his teeth) and I were driving by a north central Jersey road named for Seneca, a road I had never before noticed, a road that I wouldn't have been driving by except for Charlie requesting a soda. A road that comes with a history as it's so very near The Spot.

Yes I know I'm making a big deal out of a totally random and chance occurrence yesterday with Charlie.

Because---even we hadn't been on Seneca Road---it was a big, big little thing.

Well handled, the memory was difficult for both you and Charlie, really, well done!

My dear, not a little thing and not "making big deal" at all. Good, excellent - wonderful for you both.

I'm sorry you won't be with your parents in Calif. this Christmas.
It must have been awful for you and Jim and Charlie when Charlie had his first episode near Seneca Road. You've written before about fears you and Jim shared shortly after your son's diagnosis that he would be taken away from you by some nebulous "authorities." I'm sure that's a common dread for parents of kids like Charlie but there's no need to worry. No one can override your authority as Charlie's parents and legal guardians unless he were to commit a serious crime or be judged to pose a threat to himself and/or others.
You and Jim are wonderful, attentive parents. Fortunately the days of whisking disabled children away from their families and tossing them into some Dickensian "home" are long past.
In reading about Charlie's "neurological storms" I wonder if he's been tested for epilepsy? The fact that the disturbances happen at the same location make me wonderful if there is some power source nearby that disrupts his brain function. There have been studies indicating that the presence of electrical power lines combined with large underground deposits of granite can play havoc with brain function, causing seizures, migraine headaches or anxiety attacks in sensitive people.
It's just a thought but I think you're wise to keep Charlie away from The Spot, at least for awhile.

Stopped traffic in a familiar spot caused Pete's most sad/scary neurological storm ever. Oh, it's so hard sometimes, these situations where we have no control.

I'm sorry you had to cancel your trip to CA. My younger son gets really motion sick on airplanes and I give him dramamine right before the flight -- he sleeps through the whole thing (for a short flight, anyway). Have you considered this to get Charlie through a flight? I'm not advocating randomly medicating kids on a regular basis! but it could be an option...

Unrelated but I dreamed last night that I met you and Charlie! I think I read about the cancelled trip right before bed. It was a good dream. :-)

@Jill, Charlie's been tested for epilepsy but his EEGs don't suggest any seizure activity. But when he's in the grip of something, it feels like it's more than just a "behavior."

Thank you regarding those "nebulous 'authorities.'" The ABA consultant for the school district and Charlie's former teacher repeatedly mentioned Bancroft as a "temporary residential placement" for Charlie last year and they were really serious about it. Still feel shaken about the whole experience.

@karen d, you met us! hope it wasn't an unpleasant meeting---I was thinking about something like dramamine, certainly melatonin, for Charlie. But wasn't sure how it might work on him (he sometimes has unusual reactions to medicines) and suspected that 30,000 feet up would not be the time to find out!

Difficulties strengthen the mind, as labour the body.

Looks like the difficulty in the past has strengthened Charlie's mind, as the swimming and biking have strengthened his body.

Don't worry. They can "recommend" Bancroft or whatever other residential placement is the flavor of the day. You and Jim are the parents and you have the final say.
As an attorney I've been GAL for several children whose parents were frequently missing somewhere on the streets. Even in those cases, the parents' wishes were taken into account, up to a point. Stable, involved parents like you don't need to worry about your children being taken away. Really.
But realize those moments when the authorities get involved in your private life are beyond scary.