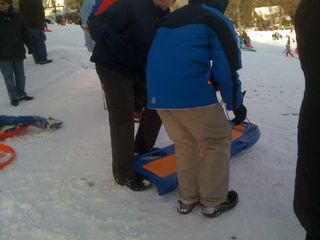 The problem with snow is that it piles up and must be removed and in a quite timely manner. And especially if said several inches of the white stuff have fallen and  solidified overnight into a low, cold, wall round one's car.

Jim set to work. The storm hadn't been of the "storm of the century" type, but there was quite a bit on the ground, though nowhere near as much as Jim recalled in the days of his Connecticut youth. (Jim is a Jersey guy but spent a couple of years in, as his mother liked to say, "New England," due to his father being transferred there for his job.)

Charlie awoke smiling in his new bed, got dressed, came downstairs. Looked outside at all the snow. Briefly held a shovel and shoveled a tiny bit. Asked, asked and asked to get in the white car which had still to be undug. I stayed inside with him; went out to help Jim clear off more of the path and around the car. Eventually we had cleared away enough snow and Charlie got in. I got dropped off at Target to find Charlie some winter boots and a mat for snowy shoes. They picked me up and we headed home.

I'm suspecting that Charlie wanted, as he often seems to, to keep driving around, but the roads were slushy and icy and Jim wanted to do some more shoveling. We went back and went inside and---was it from having to wait so long to get in the car, was it cooped-up syndrome rearing its ugly head, it was bang bang bang. A couple times over, more times than have happened in awhile at home, followed by crying and a general feeling of terribleness, in all of us.

Why did it happen? Why does he do it?

I'm not sure those questions can ever be answered. Jim and I went over a familiar list: The weather and being cooped up in the house and the loss of those beautific bike rides. (Ice, melt soon, please!) It being December with holidays and the disruptions to "the usual" they bring. Charlie's been doing much better with his behaviors at school but we have seen, in a cruel calculus, that sometimes "better" in one setting means that other things come out elsewhere. Or was it the lag at work in Charlie: He has been in his new school for a month and while he's adjusted to it on the surface, it's very likely that he's still working through his feelings, thoughts, emotions about such a monumental change. And, too (just to throw in every possible possibility, why not, sigh), the continued rages of adolescence.

No one felt too good and it was barely noon.

We had talked about going sledding and Jim and I agreed, let's go.

Charlie got quickly back in the car and we headed to a certain hill that, when he was much younger, he'd sledded on with Jim. We couldn't quite remember how to get there (it's been a while that there's been enough snow for sledding). We passed a small slope where we saw lots of families but Jim and I quickly ascertained that the children were all quite young and small and suspected that Charlie inadvertently sledding into any of them (or they into him) might not be for the best.

So we kept driving up a mountain and I spied a far steeper slope and many warm-clad figures on it, with sleds. We drove towards it, parked, had Charlie switch his blue fleece coat for a parka, and all donned gloves. Jim carried the blue and orange sled and Charlie and I stomped behind him through piles of snow, up to the top of the slope.

In my memory, it had been very steep and a long way down. I remembered, too, that the walk from the car to the top of the slope had felt like a mini-epic journey, with Jim and I taking turns to drag the sled and half-carry/escort Charlie through thick piles of snow. Now Jim walked ahead and Charlie broke his own path just behind me: No more me worrying about him tumbling down or not being able to walk one step further. 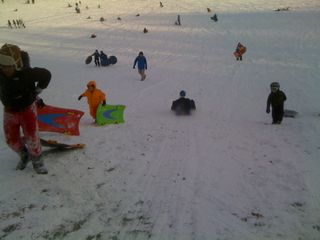 It was crowded atop the slope and Charlie made his way easily among children, teenagers, parents, toboggans and sleds and discs and sleighs of all sorts. He put his hands over his ears as Jim set down the sled. Charlie said "no" to getting on it. A few more no's and JIm went down first and waved and trudged back up and, after a bit more coaxing, Charlie crouched down byt he sled, derrière to the snow, and made his way down. Jim went down with the sled and got him to it on it at a point when Charlie could still get a ride. An image of little Charlie in a bright blue parka, hood flaps splaying out like fins, came into my mind as Charlie sat on the sled.

Then a little girl  crashed into him. Jim was right there and got Charlie up, the girl was up to and ok, and I hurried down the slope. Charlie started walking across the snow towards the car and we followed quietly, Jim noting "He's going to have a response to that crash." I nodded and then we both noted how the slope seemed so much smaller than we remembered, because Charlie is so much bigger.

Charlie stopped at the corner as a car went by. He took off his parka and put on his familiar blue fleece. Once home, he ate and ate (including the pack of sushi I had saved for his Monday lunch but had not yet put into his lunchbox---well, he did leave two pieces untouched). We watched several rounds of videos on my laptop until 5.45pm when Charlie said "bed time."

Charlie put his clothes in the laundry basket and brushed his teeth thoroughly, with a smile. He curled up his new big bed and slept till 8.15pm at which he got himself dressed, parka'd and gloved, and went on a walk with Jim. He went to bed again around 11pm, tossed and turned: Knocks and cries. He insisted on putting his clothes back on; I am sure he was mortally confused to wake up from what he thought was a night's sleep and find out he still had to get through 12 more hours before going to school. Still fully dressed, Charlie finally went back to sleep after midnight.

"It all took a lot out of him," Jim commented. Of all of us, to be honest--because we never stop being that tight team o' three. Rain or shine, snow or sun or clouds, whatever time of day; whatever time of night.

Tiring day - I imagine the expectation of a longer car ride may have been the last straw on top of all the other changes (school, snow, cooped-up). I can see the problems snow may cause, as in an exact opposite we have trouble when it's really hot, both really limit where you can go.

Yesterday we went to our local shopping area by car, 5min drive. As soon as we turned the road to find somewhere to park there was a "no" cry from the back seat. Shops were busy for Christmas, and there were continuing cries and bulks. Went home. Some days are just better than others.

We've had an especially trying time lately too, as I blogged yesterday.

(As always) I assume that everyone in my house is doing the best they can, given the circumstances. I try to be just as kind to myself as I am to my kids, although i usually fail in that regard and beat myself up mightily. Ah well.

I hope there is more peaceful-easy and less bang bang in your TTO3.

Long day for all of you- I hope that today is better!

Same thing going on here- lots of upsets and tears and outbursts, mixed with a (very) few peaceful happy times. I always forget why I dislike the holidays so much until we're in the middle of them.

I found that the better the day written in the elder's daybook, the bigger the crash at home.

The elder's been off the last 2 days. In the early years it would have been headbanging meltdowns.... now it's unending mouthies and being ignorant.. The DS has spent most of the weekend on the fridge.

great day at school, "little earthquakes" at home. he was so happy to be at school this morning, that's for sure!