Another Curious Incident With Dogs 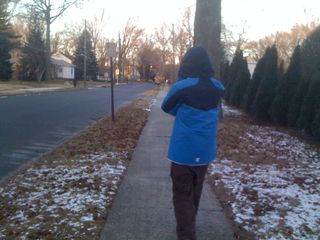 No, I could not resist that title----read Mark Haddon's novel some five years ago, and still remember it down to its details.

Dogs figure significantly for Christopher, the protagonist of The Curious Incident of the Dog in the Night-Time: The "curious incident" of the title is adolescent Christopher's discovery of his neighbor's black dog Wellington stabbed on the lawn with a gardening fork. Christopher's determination to find out "whodunit" leads to him finding out a great deal more about his parents and, perhaps?, about people. The novel ends with his father giving him a present of a puppy.

Friday's "incident" took Charlie and me past and over several lawns in our neighborhood and somewhere beyond it. It was around 4pm when we went on an after-school walk; a bit later than usual owing to some bumper-to-bumper traffic due to roadwork and a stop at the bank. It was also very cold---27˚ or so degrees Fahrenheit, less when the wind blew---and, Charlie having not wanted a long walk yet this past week, I figured we'd do our usual short one and soon be back in a nice warm house.

Rounding a corner, I noted Charlie had stopped running pell-mell ahead and was walking at a measured pace. Sure enough, I spotted a golden retriever and a woman. Charlie slowed his pace even more and I saw that the dog had stopped and was sitting on its hindquarters, and the woman leaning over the grass with a plastic bag. Charlie turned and started walking slowly in the opposite direction, then stopped and stood behind me. The owner pulled on the dog's leash and the dog started walking and then stopped, I think because she or he heard Charlie making some low-toned noises as he walked, eyeing her or him carefully. The dog looked back, walked a bit, stopped again, and over and over until her or his owner crossed the street.

We approached the front lawn of Nemesis Dog. Seeing it empty, Charlie tossed me a bright-eyed look over his shoulder, and kept on walking. I said something about it being, as it was, cold, then pulled my coat hood over my hat and was glad Charlie has been agreeing to wear gloves lately and a parka over his fleece jacket. Ahead of us, the golden retriever and her or his owner had stopped to talk to a man (I think golden retrievers as pets were the subject of the conversation); Charlie and I kept walking, for 4 1/2 miles.

From time to time, Charlie sprinted fast into the wind, me jogging after with my hands in my pockets and all the while shaking my head for the nth time about one of the oft-heard claims by proponents of a "vaccine-autism link," that autistic children, having been "injured" by vaccines and injected with "toxic" substances are "damaged," ill, diseased---a "toxic waste dump." (Yes, I had the UK General Medical Council ruling about Dr. Andrew Wakefield as "dishonest" and "irresponsible" on my mind.) I know the proponents of the notion that vaccines can be linked to autism have commented here and there round the web and who knows where else that the various "neurological storms" and such that Charlie has are (1) sure signs of something very wrong with him and (2) even surer signs that there's something wrong with us, that we haven't tried to chelate the autism out of him.

Alls I can say is, from a health perspective, Charlie is (to use a phrase Jim pulls out from time to time) a physical specimen. Robust, athletic, with lots of stamina, seemingly less susceptible to colds and the like than his parents, glowing with health as we walked in the cold and wind.

It was twilight when we got back home under the glow of a fullish moon. I did some cleaning up in the kitchen while Charlie had dinner (watermelon and sushi----got his four food groups in today).

Then he got the stuffed brown dog and the stuffed black dog that he's been insisting on sticking in the car on his rides to school and placing on his bed at night. "Garbage brown dog" Charlie told me, most solemnly.

"Maybe just put them away. Then if you want them, you can get them."

And Charlie very carefully pushed and packed the two dogs into the garbage, tied up the bag, put on his shoes and coat, and dumped the bag in the garbage. "All done brown dog, all done," he announced when he came back inside.

I helped him gather up his blankets and the worry beads and, after he brushed his teeth, tucked him in.

Half an hour later, I could still hear him and went into his room. Charlie had covered himself completely in one of his fleece blankets. He pulled the blanket down from his face on hearing me and said:

"What about the black one?" I asked.

Once I had retrieved the dogs from a Top Secret Hiding Place (I had already sneaked out and pulled them out of the garbage can), they were soon positioned with their tails towards Charlie, who was asleep in a matter of minutes.

Charlie has thrown away prized possessions (like his iPod and headphones, a few months ago) before. There's a bit more going on with this curious incident of the dogs, though, I think. Charlie definitely seemed affected by seeing the golden retriever go about her business on the sidewalk and then looking at him so intently: Maybe finding dogs doing such other things made him wary of his (albeit toy) dogs? And the "brown dog" looks very much a Golden Retriever pup Charlie and I saw on the internet.

After threw away his iPod, I snuck it out of the garbage and hid it in, though not (as you may gather) very well. I think I'll have to keep an eye on those two dogs for the nonce, and on the garbage can. Should the dogs go missing again, I'll know whodunit but as for why he dunit---that's still a mystery of a truly curious kind.

I do the same thing with my son's things tat he wants "gone". Finding a great hiding place and of course remembering where they are at is a whole other story.

It is so interesting how both your son and mine use pretend objects to imitate / mold a specific situation. I sometimes think my son memory of specific thoughts is comforting. Be regards to you and your family on such a chilly day back east. :)

the tat is suppose to be "that"

It's too bad that Charlie is so unnerved by dogs. If he could get past his fear and stroke a gentle, friendly poodle, for instance, he'd find that the feel of their soft, warm hair (poodles have hair, not fur) is absolutely lovely, a lot like the fleece blankets and hoodies that he likes so much.

My son does the same thing. With a very treasured, loved item, he suddenly wants to get rid of it. He won't throw it in the garbage, but will throw it into a hiding place. I'm mystified, too. Something definitely going on. But ... what?

I don't know really what to say about the dog thing - most Fidos around here are just out to have their walk, but I do notice that many of the owners around here bring them to the street side of the sidewalk and have them sit when we are on a walk until we pass, (maybe a dog owner can fill me in on what the thought is there - I think it's interesting). Also almost all dogs we've encountered are pretty sociable or just curious, but I am cautious myself because there was one who gave all the appearances of being a nice friendly mutt, albeit one sans owner, and then took a bite out of one of my daughter's therapists causing us to spend several hours in the ER and her with rabies shots and a scar. Not an indictment, just an event. So it leaves me kind of wondering how/what dog skills to teach my daughter.
That all said - since the nemesis is trapped in his electric fence, is there a way to ggrraadduuaallllyy move in proximity, not even all on the same day? Does it make any difference, say, if you or Jim got really close to the nemesis dog when it's enclosed and demonstrated that it was copacetic, while the other parent stayed with Charlie that comfortable distance away and watched and/or explained? Just a question, not advice. And I wondered if anyone you knew had one of those friendly dogs who seem to tolerate almost anything kids do to them? One thing that helped is that our neighbors have a dog who is so laid back that the kids practically use her as a beanbag chair and the dog remains completely mellow. That seems like a good kind of dog to help break the ice. Just thinking aloud - also not advice.

Just a question: are black dog and brown dog still on the "outs"?

They're no longer Charlie's boon bedtime companions but as revealed in the latest post, they have again escaped the garbage bin fate.