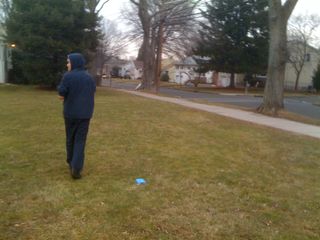 The boy who misses school on his holiday goes to bed early on the night of said holiday, in happy anticipation of "school tomorrow!".

Boy wakes up at 4.30am. Knowing he's got "school today!" he remains cheerful and peaceful through an early (very very early) breakfast; goes over the date and day and the fact that he got up early "in writing"; dozes off on the couch around 7am; groggily gets into the car at 8.15am; looks puzzled but not stricken about the CD player being potentially broken; endures waiting 15 minutes to make a right turn due to road work.

Entirely understandable that he got frustrated when he's doing an exercise at school and one of the materials breaks. Fuzzy-headedness brought on by lack of sleep can do that.

Altogether charming when, after he gets out of the white car on getting home, he turns to his mother with a smile and says "let's walk." She figures on a 15 minute jaunt.

Charlie has decided on the 4 1/2 mile walk past the home of (nowhere to be seen) Nemesis Dog. He's grinning, running sprints, looking back at his (rather fuzzy-headed---that 4.30am wake-up business) mother.

Turning the corner onto a certain busy main street, Charlie starts to moan. And cry. And weep. And howl. And louder, and more stricken, and more distressed, all while walking.

The street goes from suburban to mid-size chain stores and five lanes of traffic. This 4 1/2 miler is really a bike route that Charlie has done over and over with his dad---does it suddenly hit him, what am I doing here with mom and without my bike and where is dad?

Through the back parking lot of a large chain gym, towards the fated bridge which crosses over a semi-industrial area of warehouses, rental storage space, a service road. We ascend the bridge and Charlie gets off the curb---he's in bike mode, you can't bike on that mud and those mangled weeds---and I know he should be on the curb as he is walking but he really is In Distress and this situation needs to be gotten through, however we can, preferably without bangs, bumps, or bites. Down the bridge---some guy on a bike looking at a us---we turn onto a street of houses.

Charlie stops crying and walks home light on his feet and easy as anything.

He goes to sit on the couch and wants to use the computer. We make a grocery store run, bake brownies, get his lunchbox ready, pack his swim suit and a towel (pool day tomorrow at school). He wants a shower and takes himself to bed, asking me to bring up his blue bookbag.

"Give, give Mom." I hear Charlie's voice clear as a bell: I had thought he was asleep and go to his room. He is asleep---was talking while in slumberland. (While dreaming?)

It's one year ago that Obama was inaugurated as the President of the United States. I try to ignore the interesting thrums in my head and write about the President's track record on disability policy. I know, perfect topic to address in a public forum on 3 hours of sleep.

I am mindful that tomorrow, I mean today, is the first day of Spring semester classes at my college. Fortunately I'm teaching my old warhouse, Elementary Latin, which I've bragged I could teach at midnight, at any time of the day if I could. And I certainly had time on those 4 1/2 miles to plan out a class or two, and review my knowledge of the Roman emperors and how they consolidated the frontiers of their territory.

Since Charlie was leading the way, I didn't have to worry about where we were going.

Obama's on the way out unless he learns to govern from the middle not the full left. His approval rating is in the toilet and they lost Mass - Senate - after nearly 50yr last night.

He preaches, but refused to give interviews with the media.

They say cap and trade will never make it out of the Senate and there's a good chance now Health care reform won't either.

I appreciate his attempts... I do like the "free" part of our healthcare but understand easily how it's abused, and over extended.

Midterms will be interesting. Canadians thought when he got voted in he walked on water... not so much anymore.

FW2, Obama's ratings aren't "in the toilet." They're not in the stratosphere anymore.
Now, George W. Bush - HIS ratings were in the toilet. Under 30% before he left.

But that is a matter of semantics.

Kristina - You are usually following Charlie's lead. But it also seems that Charlie cannot always judge the true danger of threats - vide his terror of a certain dog.

What can you do when you find that he is leading you into a dangerous path, and you can't stop him? He's too big for you to physically force him to do anything. He is not a daredevil, but he can be stubborn and headstrong. He may not knowingly get into a threatening situation, but he may not see the peril, either (like when he insists in walking in the street itself.)

What about when you see danger and can't communicate it to him? He can lead. You follow. How well does he take to following when in these situations? Would he just follow you if you walked in a certain direction, the way you follow him?

There's an invisible tether, you might say, and a long-ago established foundation of what the behaviorists calls "compliance"----Charlie walks ahead of me, but he knows I'm (we're) at his back (as our various others).

Dimitri sometimes laughs or cries in his sleep. I think he is dreaming, put the events of the day into order, into memory.

I know that feeling of just "getting through" a particular event, but I can also feel there is so much thought going on in Charlies mind, so much processing, he is growing in so many ways.

I know about the invisible tether from walking my 60-pound standard poodle. Please don't take this the wrong way. I know Charlie is not a dog but the same theory of trust, learned compliance and non-verbal communication applies.
My dog trainer told me than if/when Clem slipped her collar and ran I shouldn't run after her because that would only make her think we were playing a chasing game with me the chaser and Clem the chasee.
Instead, I was to either walk in the other direction or, if there was traffic or other potential danger around, I should fall down and play dead.
Sure enough, she slipped out of her collar in a parking lot and started trotting away, looking over her shoulder and grinning at me. I fell down and lay sprawled on the asphalt. That caused Clem to come running to check me out and I grabbed her. Problem solved and I made sure her collar wasn't too loose from then on.
I imagine something similar would work with Charlie if he inadvertently took off into oncoming traffic.