Home Archives Profile Subscribe
Tallying Up
Off Season? Never Heard of It

Haiti and Disability and How To Help

Via lagloria via Izzyland on Twitter, I read this article on autism in Haiti in Spectrum Magazine by Cris Italia. One commenter, a librarian at a school in New York, asked about contributing to an organization that helps children with disabilities; Italia notes that such information will be posted soon as it's found out. I'm still looking for an autism organization in Haiti on this list of such organizations around the world (via Action for Autism). The Justice For All blog of the American Association of People with Disabilities (AAPD) reports:

I think we all felt shocked, saddened, and horrified by the news and images of the aftermath of the earthquake in Haiti this past week, and many of us lent money, time and support to excellent relief efforts.  However, I was pleasantly surprised to hear about relief organizations that are targeting those victims who are most severely affected, those most isolated, most stigmatized and most overlooked by other organizations, those with disabilities.  Before the quake approximately 800,000 Haitians were living with a disability.  With the destruction of the quake, that number is likely to have increased significantly.  Portlight Strategies is on the ground in Haiti providing food, water and other emergency service to our Haitian brothers and sisters with disabilities.  Healing Hands for Haiti has been serving Haitians with Disabilities for over 10 years, and despite having suffered serious losses of their own, they are continuing to assist in Port-au-Prince, the capital city.

Also see LauraHershey.com on how to help Haitians; another of her posts provides more information on Portlight Strategies, which is collecting emergency supplies and equipment to ship from Atlanta to Port-au-Prince. You can also see the United States International Council on  Disabilities for additional information and a list of non-governmental organizations that accept donations and specialize in assisting individiuals with disabilities in Haiti.

Life raising a child with disabilities like Charlie certainly is not easy, but I know he, and we, are fortunate that we're in a place where there are many, many resources, and that Jim and I have been in a position to provide many of these for Charlie. We had a very nice Saturday here, with a rather early morning wake-up (5am---actually, that doesn't sound early, compared to 3.45am), a walk, a mid-morning snooze for Charlie, a trip to the barber shop for a buzz cut (also for Charlie---not me, for sure!), a bike ride. I'm noting a small but (to my mother's eyes) progression in Charlie's writing skills, as in this rendition of Saturday: The initial "S" is a bit of a doodle-squiggle, but he slowed down to write the remaining letters, looking carefully at my model. Again, I have a very motherly bias, but I find Charlie's writing of "haircut" quite impressive.

Charlie continues to do these little exercises without objecting when he takes up the marker. I would like to work him up to using a pencil or pen, but I can see Charlie is more inclined to write with a felt-tip marker as he has to exert less pressure, and so can concentrate more on forming the letters; he can also see the results more easily. Indeed, at the moment, Charlie has a pleased little grin when he puts marker to paper.

Not going to ask for more than that here. 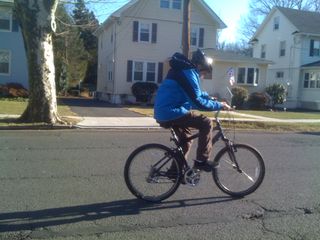 Thanks, I've been looking for a way to help. The other day on CNN I saw footage of elderly and disabled people just kind of lying around waiting to be helped while their center crumbled around them.

And when I think of what it would be like for Charlie to lost everything that gives him order....... or if he'd been at school----and what about those who aren't able to call for help?

My artist husband eschews all ball-point pens and only uses felt-tips. And he's as nonautistic as they come. It's a simple matter to carry a FLAIR pen in your pocket (although apparently not quite so simple to remember to remove said pen prior to washing the pocket in question. ;-)

I can see some differences as well. He's seems to getting familliar enough with letter formation to develop his own handwriting. Do you always write and have him copy your handwriting or do you sometimes print from the computer and have him copy that too? Bede likes typing and printing things, then having me cut the words out so he can arrange them.

I can hardly imagine autistic life in Haiti before the earthquake, let alone now. Gosh.

It often helps my students, when they are just beginning to write, to provide a box in which to write each letter, so if Charlie were copying, say, Sunday, you would write the S over a box, the u over a box, and so on. It seems to help both sizing and spacing.

I hadn't thought of having Charlie copy something printed from the computer---thanks! I'm still "recovering" from years of being told by teachers and OTs that Charlie had to learn to use a pencil, do the "age-appropriate" things, etc.. Must get some Sharpie markers.

Since starting this writing business with Charlie, I've noted he seems to be making more of the letters look distinct each from the other---everything looked the same before, whether u n a y g x s h r .

Since the only thing Charlie wrote for years was his name, he was still only writing "Charlie" as soon as he had a writing implement in his hand, even up to a couple of months ago. At the middle school, they tried having him write out his reinforcers and some other words, but I think there was a lot of fretting about him forming the letters EXACTLY and writing on LINES and keeping it all a CERTAIN SIZE---you can see why Charlie did not get very far with writing. A lot of emphasis was then put on him learning to type, but he got nowhere with the typing program the school had (Type to Learn).

Doing these writing lessons with him has reminded me of why I enjoyed writing so much when I was younger----just loved forming the letters and, as you note, developing my own sorts. (I am sure that being able to learn how to write in other letters was an impetus for me learning Greek and, for a year, Arabic.)

I keep thinking of how long it's going to take to rebuild and recover in Haiti---have a hard time getting my mind around it all.

The writing looks to be coming along nicely. I wouldn't doubt that the regular, no stress practice helps that sort of thing. I can definitely tell what some of the letters are, even when he appears to have some difficulty connecting some of the lines. It's interesting to me that his a appears to be a capital A without the line in the middle.
If you wanted a pen though, I have a pen that is really fat. I know it's called an XXL, I think by bic. It's got a nice cushy grip on it. The first one I got, the PT I saw after I had hand surgery gave to me. My preferred pencil is a black triangular pencil. I think it's Ticonderoga. They make on that is regular size, but the black ones are bigger.
I could use Charlie's help waking up in the morning, and going to sleep a bit earlier. I am still up, and need to be out the door by 5:45.

Thanks for the links - the thought of Dimitri being in a similar situation..........(last big earthquake in Athens 10years ago. And when I think of countries that are in civil war, it gives me chills).

The first letter is an excellent fi!

Darn it! should have written phi but was thinking φ - I don't know how you don't get confused with translations.

Boy, talking about putting all your task demand in one basket...most handwriting curricula are progressive and work up to the desired result.

Charlie looks like he's doing great with that marker! When my daughter started out, even the demand of holding something was too much so we just started with using a pointer finger in chalk dust. If you ever feel like you want it, drop me an email and I can share a couple of graduated handwriting programs that we've really liked. But in the meantime, I'm really glad to hear that he's enjoying the writing. Wanting is halfway there (smile).