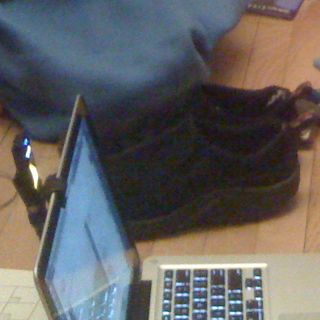 After several months of typing the names of not-yet-forgotten PBS kid shows into the Search box of YouTube, I am pleased to announce that Charlie and I are now search the whole internet (just like how many of us for desired items, with Charlie doing the typing. Not a cosmic development, perhaps, but one that suggests to us that Charlie is, slowly but surely, realizing what one can do with a computer. Charlie has never been overly interested in the computer or, rather, in actual "adult" computers.

A couple of nights ago, Charlie asked to see "Charlie computer."  I happen to know that Charlie is referring to a yellow-lidded VTech toy computer that my parents bought for him when he was a year and a half old. It was his supremely favorite toy then. Charlie called it "buh-tah" because, at that time, he couldn't say the /k/ sound, make the /er/ sound, or add final consonants sounds. Now he can pronounce "computer" fine so at first when he started asking to see "Charlie computer" on my laptop, I wasn't sure what he wanted. I didn't think it was one of the old computers I have some photos and songs he used to like stored on, as Charlie very rarely uses these. From his crystal clear pronunciation, the ardent tone in his voice, and his smile, it was evident that this "computer" was something Charlie thought very highly of---hence I thought of his original little "buh-tah."

It's also the case that Charlie's strongest memory seems to be for the first things or people he has known. He mentions the names of some of his very first ABA therapists everyday and also two speech therapists in New Jersey who worked with him on and off for years (one was also his main sitter). Most of Charlie's ABA therapists live in other states but some have sent me their blogs and I've friended some, too, on Facebook. I kind of feel like it's a bit of cyber-stalking, but I've looked up their Facebook pages and shown Charlie a few photos (he particularly enjoyed seeing one former therapist's baby, along with photos of her).

Thanks to Google Chrome, I've just been directing Charlie to type into the URL box, press enter, and voilà (after I click "Images"---Charlie hasn't mastered the trackpad on my laptop yet and he's not sure how to move a cordless mouse around), there's row on row of images of VTech toy laptops for Charlie to behold. He has been scanning them all and pointing to one for me to enlargen or, as he says, "turn on"----I at first worried that he thought any of those images could become a video and there'd be a moving, beeping laptop for him to watch. But he's been fine just seeing the photos (and even though we have not found the exact same toy laptop he once had).

Charlie's also asked for "green book" and, since he was recalling his techie toys of old, I remembered that he had one of the original LeapBooks and that his was green and blue. He was transfixed looking at the photo of one on Ebay. I asked if he wanted us to get it (the price was a significant fraction of what we'd paid when LeapBooks were the Hot New Toy Thing) and Charlie indicating not really yay or nay, I didn't. Maybe he preferred to have just that 2-d photo, rather than the actual plastic reality of the LeapBook.

And the other entity Charlie has wanted to type into Google Chrome?

Specifically, a dog who looks like his aunt and uncle's dog, Portia. We looked up Cocker Spaniels, Terriers, and Golden Retrievers and Charlie was quite taken to see multiple photos of four-footed friends (many of which I, who am no lover of dogs, found overwhelmingly adorable). (But still sorry, folks, we are not getting a dog around here. Repeat, we are not getting a dog.)

As Charlie's been typing and looking, it occurred to me that in the past I had been much more hesitant to show him photos of things he requested, found randomly on the internet. I worried that he might get upset if the dog or toy computer or whatever was not exactly what he envisaged in his mind's eye. Charlie has, rather, just seemed pleased to see photos more or less resembling those requested items.

And I'm not sure that he quite realizes this yet, but we can search infinitely to find those things, anythings, he requests.

Which makes me feel, those long-gone toys, those therapists we said "good-bye" too: They are, in one sense,"just a click away."

Thats's interesting that Charlie wanted to look at dogs considering his relationship with nemesis dog... I worry if Dimitri sees a picture of something he once had, that he may be upset that I no longer have said item (and I'm wondering if in 2 years or so, he may develop a better sense of time, of things past and present??)

Google Chrome, Christos told me yesterday I should put it on my computer, to which I said "huh?".

Sooner or later, we all get addicted to the Internet!!! ;-)

@Emma, you're the 2nd person who told me to go and get one----not ready (me I mean!). -- Get Chrome, you can download it and because it's a browser Google made, you can just type into the URL box to search Google.

The computer has been the perfect tool to satisfy MJ's "special interests" without mom and dad having to spend lots of money. There are videos of EVERYTHING on YouTube. And most of them have nothing to do with thongs.

One day, MJ was hiding something on the computer from me. I asked him about it and he got very upset and wouldn't tell me what he was doing. I couldn't convince him to tell me, so I searched the computer but didn't find anything of concern. He eventually told us he was watching videos of some particular mechanical devices on YouTube. He was very upset because he knew he had broken a rule about using the internet without permission. Permission to watch these videos was immediately granted.

TH and I used to sit at the computer and google images of his favorite things, mostly acorns, pecans, and walnuts. It got to the point that I could tell exactly which thumbnail he'd select to see in its full size, something about the quantity of nuts or the closeup factor. We still do that occasionally.

Yesyesyes on the ease of search with Google Chrome. I've been working on teaching that to TH, too. He also cannot do the trackpad on the laptop.

Dogs are great creatures. I love them. TH, on the other hand, is terrified of them, which makes me think we should get one, soon. I think the sweetest, most wonderful dogs in the world are golden retrievers, but the shedding is a pain. Also love corgis, Australian shepherds, and dachshunds, but those last can be temperamental.