Letting Go and Letting Be

This post is about how a strategy of "letting go and letting be" has helped me do (I hope) a better job of helping Charlie make his way in the world.

But first I'd like to ask you to read a post by Emily over at A life less ordinary? about the case of 11-year-old Zakhery ("Zakh") Price from Fort Smith, Arkansas, who has been charged with felonious assault.

Yes, you read that right---an 11-year-old child with a disability has been charged with a felony.

Zakh has been diagnosed with autism, ADHD, OCD, and ODD (oppositional defiant disorder) and is said to have an IQ of 68. Zakh lived for 2 1/2 years in specialized institutions before attending a public school classroom with 28 children "with zero supports," as Emily writes, not to mention no "true IEP or behavior intervention plan." The school responded to each of "three major meltdowns" by calling the police who, on the third call, arrested Zakh, for kicking one staff member and pushing another. Emily has spoken not only to a reporter covering the case but also to Carole Reynolds, Zakh's grandmother, and if you think my description of this case has something puzzling about it----an 11-year-old with disabilities charged with felonious assault?---Emily unearths a lot more that is a lot more disquieting. If you haven't already, see the Facebook group Carole Reynolds has created for Zakh with a listing of blog posts related to this case.

The case of Zakh Price and the use of restraints and seclusion in the public schools say way too much about the ignorance out there about teaching students with disabilities. Surely we can do better than arresting children with disabilities, physically restraining them, and sticking them in timeout rooms that sometimes have locked doors?

The rest of this post is one little realization we've had about teaching, and being with, Charlie. 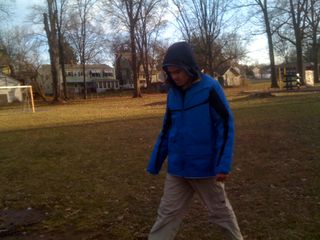 Mayhap Charlie is going through another growth spurt as he's seemed in need of extra sleep. The past couple of days, he's been dozing off on the couch around 5pm. He wakes up after 1-2 hours and is able to get to bed rather, but not too, late. He's had trouble waking up to go to school but (amazingly) we've only ended up being a few minutes late (good thing his school starts at 8.45 now; his old school started an hour later).

It's possible also that Charlie might be getting over whatever led to him getting sick the afternoon before. Who knows, but maybe he was so unsettled and behavior-ing the previous weekend because he wasn't feeling well. (I know, why didn't I think of that possibility earlier---sometimes a parent is the last to figure it out.) Also possible is that he's readjusting s-l-o-w-l-y to the routines of school, getting up and out earlier.

In the past, Charlie taking a nap did not bode well for the rest of the day, and the day after. He'd often fall into a very deep sleep for at least two hours and wake not so much refreshed as uneasy, as if he couldn't quite figure out what time of day it was. Didn't waking up mean it had to be morning---but it was light out and he was fully clothed. Regardless of what he did afterwards, nothing would tire Charlie out and he'd be unable to sleep until midnight at the earliest---meaning that, the next day it would be nearly impossible to rouse him in time for school, meaning that he would get off to a bad start to the school day and the rest of the day would be downhill from there. Accordingly, we often went out of our way to get Charlie to stay awake; these efforts were rarely successful and usually left everyone feeling something less than peaceful-easy.

A steady regimen of serious physical activity, a big change in medication last summer, a little melatonin, a regular bedtime routine: These have for the most part helped Charlie to establish a regular sleeping routine which has occasionally been disrupted with very early wake-ups. Too, on noting that Charlie's neurologist includes "sleep disturbance disorder" as one of his diagnoses, Jim and I have become much more attentive to how, for Charlie going to sleep and waking up can be difficult transition periods, as if he simple needs a lot of time to move between states of consciousness. Giving him enough time for both, especially for waking up, and not being overly insistent that he go to sleep/get up right now, has helped a great deal.

Sure you can say I'm more than a bit of a softee in my "parenting style." But learning to not insist on "this must be so right now," to let go, to relinquish a need to control: This has been something I've had to work on in myself over the years of taking care of Charlie. I am sure it is not for everyone but, in our household, it has certainly helped. I have definite obsessive-compulsive tendencies and, as I've learned the hard way, when I'm rigid, this gets in the way of helping Charlie who has plenty of OCD-ness himself. Several several posts ago I wrote about learning to let go as being like grass in the wind---yes this is a little more Zen-speak.

But "letting go," relinquishing control---doing so doesn't mean that we "allow Charlie to do whatever." Lately I've been finding that "letting go" combined with a little reverse psychology can have interesting results.

Such as, after waking up from what turned out to be under an hour snooze, gladly greeting Jim when he came home, and going on a spin in the car listening to Jimi Hendrix and Nirvana, a shower, Charlie told us:

It was just after 8pm. We told Charlie that it was still early and he really didn't have to stay up, he'd had a nap and all. But Charlie himself insisted:

And to bed he went.

After so many years of trying to hold back the uncertainty, the sense of chaos and "what are we going to do now," that a parent feels after their child is diagnosed with autism, learning to "let go and let be" might seem ridiculous and a cop out. That's what I used to think (certainly when I had a hard time seeing outside the ABA box).

Charlie himself has shown me, thinking otherwise is just what we needed to do.

This case of the 11 year old, my god, what was the school doing?

Letting go and letting be is certainly not a cop out. There is a need to let children have a little more control especially as they get older. If you weren't flexible I imagine there would be a lot more difficulties (as there would be with many typical teens who feel the need to have more control of their lives). As you pointed out it can be hard to learn to let go too.

I think that oftentimes the letting go is a sign of our maturity (maturity as in lots of experience, not as "Oh, wow- I'm so mature now!) as parents of autistic people...I'm not sure that it's 'letting go' as much as being more sensitive to what our child actually needs, as opposed to what we think they should have. In our intensive early intervention days I was often told not to let the kids just do what they wanted...every moment was supposed to be a teachable moment with my direct involvement. Fortunately over the years I've learned to be a lot more flexible than that, and I think that it works out better for the entire family, but most especially for the kids.

"Sure you can say I'm more than a bit of a softee in my "parenting style." But learning to not insist on "this must be so right now," to let go, to relinquish a need to control: This has been something I've had to work on in myself over the years of taking care of Charlie"

I could almost have written that! Luckily for my guy, he's the youngest of my brood, so I was able to learn a lot from his siblings. Still, I got a lot of flak from casual observers (when he was little) who would think that I was "letting him" have his way too much. This was pre-diagnosis, and my parenting style was, indeed, "soft." It was soft for a reason - if I gave my boy a few extra seconds (or sometimes minutes) to do what he NEEDED to do, to ease his transitions, we all went easily through our days. If I didn't, everything took much, much longer; everyone's nerves were shot; and I could see no reason to make everyone miserable just so that I could be "boss."

This is so wrong on so many levels. I go to bed angry when I think about this story. I am praying for a happy ending here.

I know, 11 years old and this child had gone from an institutional setting to a public school class with no supports? I hate to say it, but Charlie would have a rap sheet if he were in that school district.

"In our intensive early intervention days I was often told not to let the kids just do what they wanted...every moment was supposed to be a teachable moment with my direct involvement"

---we were told exactly the same. I've a lot of (painful) memories of when I wished I'd done the opposite. Live and learn, way too true.

I LOVE that you are using reverse psychology. My Dad used to swear by it. He raised 10 good kids, so I figure he had something going for him.

Zakh's story is sad. The schools really could use a little less rigidness! It's just stupid (yes, I said it), and shows a total lack of understanding.

Arkansas is known for poor schools. Lots of people retire there because the taxes are low-but that means no money for schools.

My daughter started in Wayne County (Detroit) Michigan where we had to fight for the basics. When we moved to St. Louis, I insisted on the best school district for special ed. Having occupational therapy in the IEP is worthless if the therapist only gets to your school once a month.

I just read a book called Managing_Family_Meltdown: The_Low_Arousal_Approach_to_Autism. I am not sure it could work in our family for a couple of reasons, the primary one being my ASD son's NT twin. However, as I read it I kept thinking I'd see your catchphrase "peaceful easy-feelingness" mentioned. I think you'd appreciate it, and be gratified to see professionals giving instructions on just what you've been doing all along.